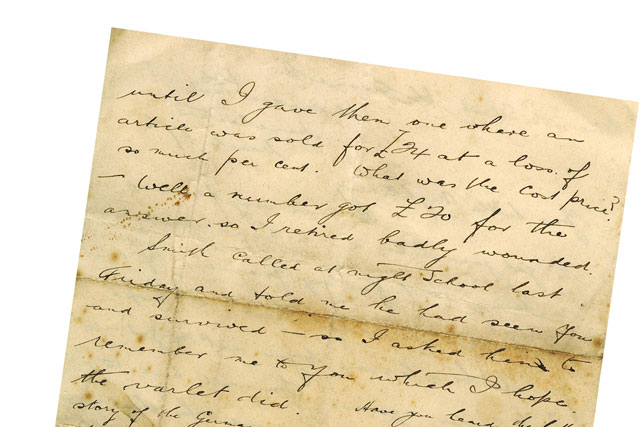 A LETTER
by Talila Baron

She found the letter in the attic. It was undated but possibly written before World War II. She showed it to him in bed. It was signed, “Ashley.” There was no greeting. She was moved by it and asked if he felt the same. He said he did, but wanted to read it again, preferably alone. She rolled away from him and closed her eyes. The summer heat made her dizzy.

She nodded, eyes shut. “Okay. But I want it back.”

He didn’t know much about her beyond her liking red wine and sex. But she was a romantic and a patriot. She could quote Byron at length and she dismissed claims that he was cold and ruthless. Warm and ruthless, she joked to herself. She owned an antique American flag sewn in Alabama. She’d been a competitive figure skater until a few years ago. She hated her mother. She loved him with a kind of wild allegiance, though he was known as a player in certain circles.

He didn’t ask her about herself. They had known each other three months, but had just begun to make love. “Let’s go to bed,” he’d said to her in his casual way.

He didn’t consider himself a romantic, but the letter was romantic, even heart-breaking. Like an ice cube in the bottom of a glass: it made him feel like that.

He read the letter to his other girl that night. She was even newer than the first. He didn’t know what to expect. Right away, she started crying. She got up from bed. She moved through the apartment naked, watering the houseplants. Ferns, palms, pothos. She loved Mozart and had a dancer’s body and long blonde hair.

“If I were the writer of the letter, I’d want a second chance to show my lover what he really meant to me, because first chances shouldn’t count,” she said. “Everything in life must be done twice.”

“You’re not born twice,” he teased.

“Sure you are. Ask any Buddhist.”

He lay stretched out in bed, his hands behind his head, his chin tipped up. “What will we be in the next life? Lions or mice?”

“We’ve done this dance before.”

He smiled and thought he might be in love with her. She was someone who had an entertaining explanation for everything. He looked across the bedroom. Curtains flapped in the breeze. A truck rumbled by. He tucked the letter under his pillow, but made a mental note to take it before he left.

“When does your sister get here?”

“I did,” she leaned down and kissed him. “You forgot.”

He sighed, threw off the covers and began to dress. He thought if the sister looked anything like her, he’d be in trouble.

Sheryl was nothing like Danielle. She was short and stocky. Her dark brown hair formed a frizzy halo around her face. In the car, she complained about delays at JFK, turbulence, and the food. He disliked her immediately.

“Well, I’m glad you made it,” Danielle sighed.

“Barely,” she groused. “The first thing I want is a hot meal, then a hot bath. Then I’ll go straight to bed.”

Sheryl didn’t answer and started rummaging through her bag. She found a tube of lipstick and put it on. It was a ghastly orange. She puckered her lips. Then she boxed it up in its case. “Berkeley is a great city, a beautiful one. But I live in New York.”

He drove the whole way in silence. He thought of pulling over and dumping her on the road.

Later at Danielle’s place, Sheryl sat on the edge of the bed and bounced a little. She frowned, disturbed by its springiness. He gave Danielle a look, but she was clearly used to this behavior. They ordered from the local Indian place.

“I hate Indian food,” she said. “It gives me heartburn.”

“I see it doesn’t keep you from eating it,” he laughed.

Sheryl put down the fork and narrowed her eyes. “Well, I don’t want to starve.”

He laughed again, thinking there was little chance of that. His girlfriend shot him a look. Then he stopped laughing. Inside, he was thinking this woman was horrific.

When he drove off that night, he considered going to the first girlfriend’s house. As soon as he thought of her, he thought of the letter. He’d left it in Danielle’s bed, under the pillow. And now that cow of a sister would be sleeping on it.

He had no choice but to go back. He made an illegal U-turn. A driver honked.

He found both women in the kitchen. Danielle was grinding coffee and Sheryl sat at the table, reading aloud from the letter, chortling now and then. He could see she’d left her filthy fingerprints all over it. He felt mad and jumbled up.

Sheryl fanned herself with it. “You’re Ashley, huh?”

“So is ‘Ashley’ another girlfriend of yours?”

He snatched it from her with one athletic move. Then she grabbed it back. He didn’t want the letter to tear, so he let it go.

“If you want it back, you have to tell us where you got it,” said Sheryl.

“I don’t know. On the street somewhere.”

“Bullshit,” Sheryl turned to her sister. “He’s hiding something.”

He began to pace back and forth, running his hand through his hair. He knocked over one of the ferns, then crashed into a palm. His girlfriend begged him to be careful, but he hardly heard a word. He stumbled over the cat. He picked it up and smoothed its fur.

“I found it in my grandparents’ attic. They’re dead and I don’t like to talk about them.”

On the far side of the kitchen, Sheryl rolled her eyes. Danielle poured coffee into two mugs. Her face tensed and he could tell she was about to cry.

“You told me your grandparents were alive,” she said. “The ones that raised you.”

“My mother’s parents, not my father’s.”

“No, that’s not what you said before.”

He had nowhere to retreat from his lies. It was like she’d shut all the windows simultaneously and the air had gone from the room. He tried to come up with something that was orderly and consistent with his lies, but nothing came. His arms felt limp.

Danielle stared at him. “I think you’d better go.”

He didn’t want to go. He wanted to tell her that he’d fallen in love with her, that he’d been outside the experience of love for so long, that the letter made him realize it, and that he would leave his other girl. Except he couldn’t say any of that.

After he left, close to midnight, he was completely worn out. Without knowing why, he decided to walk rather than drive to the first girl’s house. Though he didn’t take in anything he saw: the homeless men, the house-fronts, the night sky veiled in fog.

Again and again, he thought of the letter. He was thinking so intently of it, he walked five blocks past her house to his own house. He was dead-tired. He tried to watch a funny movie to cheer himself up, but he fell asleep on the sofa with his shoes on.

The next day, the patriotic girl came to visit him. Her face was barely visible in the shuttered room. She wore a dress patterned in delicate flowers. It reminded him of Danielle. The lilies she’d brought him trembled in the day’s heat.

“Do you still have that letter I gave you?”

“Are you coming over tonight?”

She laughed. “Since when are you a Quaker?”

“It’s something I’m trying out.”

“But you’ll get the letter?”

He nodded. They made love and she left and he called Danielle to ask for the letter. He hung up right away when he heard her voice. 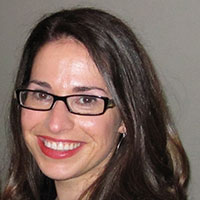 Talila Baron recently completed her debut novel, Blotted Out. Her stage plays have been produced at the Magic Theatre in San Francisco, New York University, and the Abingdon Theatre in New York. A winner of the Wilner Short Story Award, Female Eye Screenwriting Competition, and Jane Chambers Award for Playwriting, Baron was a also a finalist for the Kennedy Center American College Theater Festival, a finalist for the Beverly Hills Film Festival, and a semi-finalist for the Chesterfield Screenwriting Fellowship. She holds an M.A. in creative writing.