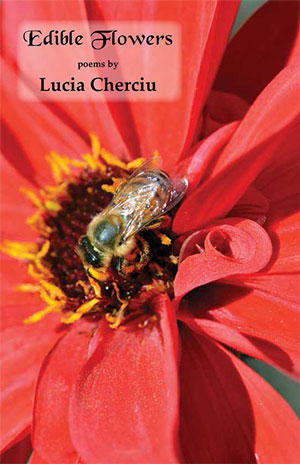 It’s easy to forget, in the middle of reading a stanza or a paragraph or a recipe for sauerkraut, that language is something constantly occupied with its author’s intention and its reader’s reception — it is not still nor discreet nor impersonal, no matter how inhumane the result may taste. Lucia Chericiu’s poetry collection Edible Flowers, through its personal and intimate depictions of history, home, fruit, bodies, and language, communicates how language is constantly in translation, moving between nerve-endings and letters, and irrevocably infused with the humanity that authored it and the humanity that receives it.

The poems of Edible Flowers are largely occupied with how both the material and the lingual in people’s lives come with human stories ingrained in their meanings and purposes. In these poems, and in the reality they came from, all objects and words betray a time and a place and a person. A tree grown in a drought means a neighbor has stolen water, an old women’s hands aren’t merely tools but things which “bespoke hours and years she toiled,” and the propaganda people are forced to memorize is made not merely of phonetics, but of something which causes it to take the air “like blind bats.” Almost every word and object in these poems is translatable to something more than its own composition; through the humanity that affects and fills it with meaning, the materials and words in Edible Flowers exist between what they are and what they mean. 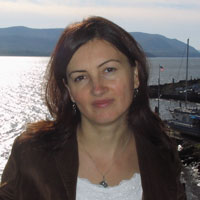 An example of this translation emerges in “‘Beach Scene: Little Girl Having Her Hair Combed By Her Nanny’ By Edgar Degas”, which depicts Degas’ warm and gentle image of a girl in repose juxtaposed to the speaker’s crowded and power-outage-prone living space as they look at a print of the painting. This poem translates the Degas work into a personal experience, framing an image of the painting with a life that so contrasts it. The speaker describes their “one narrow bed and desk” and “one bathroom / shared by the other seven / students in the basement” but bemoans nothing, simply going on to observe that, “In the painting, the girl lies / under an umbrella / and her nanny untangles her hair,” The speaker allows the reader to see these differences of the two spaces, how they contrast, how they seem so far from and unlike one another, without judging either one. The description of the painting in the poem is believable and general until the last line, which reads, “In the air, taste of salt” an observation that’s physically impossible to observe from only seeing the image of the waves and beach in Degas’ painting.

Here, Chericiu has bled these scenes together, mixing the worlds of paint and ink through human association, binding rather than separating these images by translating them into the same life.

The taste of salt in the air exists somewhere in between the oil paint, the basement room in Bucharest, and the page that  Chericiu’s poem lives on.

In performing these translations between differing languages, ways of life, and mediums of art, Chericiu’s poetry in Edible Flowers creates a space between the things it translates. For instance, in “How To Make Your Mother Laugh” the poem’s persona reads newspapers from their home country and learns “that you can translate salaries / internationally / in numbers of chickens.” This realization makes it clear that, across culture and distance and language, there are connections, ways that chickens and paper dollars are not opposing ideas, but different ways of pronouncing the same word. I would argue that it’s in this space, the international, cross-lingual space where chickens and money morph into one another, that the persona notes “Then I call my mother / and we laugh together.” This laughter itself is in between and across countries, and despite being surrounded by the news of local tragedies, such as the woman who “left her three children / home alone for seven days” or the couple who “sold one of their children / in France for a ticket home,” it comes to both the speaker and their mother like a memory, a way of being from the same language still living in and through the both of them.

Along with addressing successful translations that create spaces between words and loves and lives, Chericiu’s poetry also touches on mistranslations and absences of understanding. In “Edible Flowers” Chericiu’s persona observes:

Again, Chericiu’s poetry emphasizes that understanding a language means more than recognizing words on a page. In “Edible Flowers,” being foreign means not simply sparring with a new way of capturing the world in letters, but struggling to grasp an entirely new world that comes with words you don’t yet know how to assign. For this persona, fluency is “eating the flowers” and living to know how they tasted.

By honing so much on language and human relationships with language, Chericiu’s poetry is incredibly conscious of its own use of words. This internal awareness encourages readers to wonder what can’t possibly be translated from nerve to letters, what experiences can’t make the leap between the act of living Romanian communism and the English language it’s being communicated in. In “How Do You Forget Your Native Language?” Chericiu’s persona describes the “old patterns” used by friends to “build bread ovens in their backyard” as reminders of their native language, which call to mind “the rhythm of words.” This portrayal of language, as material and familial, as built into the actions and practices of friends and culture, takes it out of merely existing in letters, and casts it as almost an entire way of life, making its loss all the more significant. At the poem’s conclusion, the speaker explains:

At night, I leave the gates open
for my father, who didn’t
find his way home.

These lines not only communicate an absence, but also compare the act of forgetting language to losing family, to standing by an open gate waiting for something to come home out of the dark. The element of family and language itself becomes lost in this poem, the English of the piece, something to almost disregard at the poem’s beginning, is an enormous concern by the piece’s end, perhaps sealing the loss with the evidence of a second language being the first one written.

Lucia Chericiu’s Edible Flowers holds language and history close to humanity, reminding readers how both words and years are fluxing spaces defined much more by their occupants than by any stationary, dictionary definition. As the title suggests, this collection is filled with consumable and beautiful pieces that live between worlds and languages, leaving room enough between modernity and history, individuality and community, and art and reality. 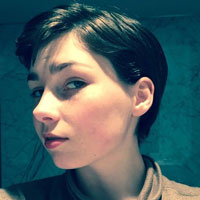 Claire Oleson is a student and writer hailing from Grand Rapids Michigan. She’s currently studying English and Creative Writing at Kenyon College. She’s an avid fan of books, bread, and  trying to win the hearts of all felines, regardless of how cantankerous they may be. Her work has been published by the University of Kentucky’s graduate literary journal Limestone, Siblíní Art and Literature journal, Newfound Journal, and Bridge Eight Magazine, among others. Some of her work can be found at tangerineinklings.tumblr.com/.