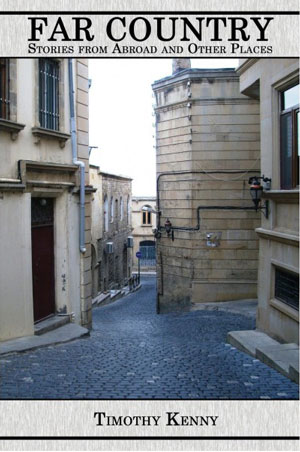 In the preface to Timothy Kenny’s new essay collection, Far Country: Stories from Abroad and Other Places, Kenny links his stories to the new journalism of the 1960s, the work of “Tom Wolfe, Gay Talese, and Joan Didion.” Yet although Kenny positions himself as Didion, personal and revealing, he more often echoes New Yorker journalist John McPhee. His essays hold back, shield the author’s character, and confess little. The best of them capitalize on Kenny’s strengths: carefully observed detail, compelling stories, and flair for sentence. But only a few of them require Kenny to risk baring himself and his responses to distant places.

Kenny is a former USA Today journalist and a journalism professor who has worked abroad since 1989. He’s seen a lot: Belfast during the Troubles, Berlin right before the wall fell, Sarajevo during the siege, and Kabul as Afghanistan is rebuilt. He’s interviewed Vaclav Havel in Prague and fought off feral dogs in Kosovo. His character feels like the movie version of a Western journalist abroadhe’s Mel Gibson in The Year of Living Dangerously or Stephen Dillane in Welcome to Sarajevo. Kenny himself might resist the comparison, since, he notes, he “was neither a war correspondent nor a traditional foreign-based journalist . . . [but] a reporter fortunate enough to travel overseas frequently.” Still, Kenny is true to journalistic type: he’s jaded enough not to be shocked by what he sees, pragmatic enough to resist heroism, and reluctant to indulge in unbridled idealism.

Like most veteran reporters, Kenny has a great eye for detail, especially those that evoke how different these far countries are from home. In Kosovo, when he wears a green silk scarf, women smile at him. “A teenager once leaned over from behind the counter to feel the smooth fabric between her fingers,” he writes. “She pursed her lips together silently in appreciation but said nothing.” The wordless interaction speaks volumes about the rarity of beauty and luxury in this place. In Kazakhstan, he bargains with a taxi driver for a ride and is about to step into the car, “when a woman who had been standing next to me at the curb said in English, ‘No mister, don’t go.’ Then ‘Look at his face.’ I stepped back and stared at the driver. . . . His fingers twitched on the steering wheel and he could not hold eye contact. If he wasn’t a junky, he was doing an excellent impression of one.” Anyone who has spent time overseas will recognize these dizzying moments when a traveler suddenly decodes a culture that has seemed obscure.

Equally striking are Kenny’s fine turns of phrase, which help him paint in details with economy. Take, for instance, the description of those dogs in Pristina, Kosovo’s capital: “In the day, Kosovo’s feral dogs were skittish and fearful. . . . They looked furtively over their shoulders at pedestrians; loud noises turned them sideways in fright, their bodies forced into a cringing, U-shape of submission. The dark of an unlit night altered the equation.” Often, Kenny’s writing is this powerfully visual.

Given these talents as an observer and a wordsmith, it makes sense that Kenny often stands in the background and lets his story unfold. In the brief but resonant “Death in Tel Aviv,” he recounts a conversation among older men in a gym locker room. One of the men tells the story of his father’s suicide, and when the story ends, it leaves a silence behind. In an essay about a month he spent in Kabul, Kenny finds the humor in a situation instead, recounting his exchange with a stubborn border guard looking to collect an exit card. Kenny replicates the dialogue with a precision that captures the Kafka-esque experience of being detained by any immigration official anywhere:

“Where your exit card?” the guard asks.

“I didn’t get one. Nobody was giving them out when I arrived.”

“I don’t have one. No one gave me one.” I am suddenly very thirsty and reach into my handbag for bottled water; I crack it open and take a sip.

“Why you get water? Get card. Where your card?”

But paired with these reportorial gifts, Kenny has a reporter’s reluctance to practice self-examination in lieu of talking about others. The weakest essay here is Kenny’s admittedly dramatic account of “The Siege of Sarajevo,” which opens with Kenny in the bed of a truck under sniper fire. Instead of writing about what the experience means to him two decades on, Kenny seeks out the other journalists who were with him in the truck for their recollections. As a result, “The Siege of Sarajevo” is anecdote, not essay; it recounts events, but doesn’t analyze them. Kenny could explore how it felt for strangers to try to take his life, but he doesn’t; he simply relates that when his plane from Sarajevo landed, he kissed the tarmac.

Other places, where Kenny has digested his experiences and isn’t as reluctant to extract lessons from them, the essays blossom. A beautiful reflection on the month Kenny spent teaching journalism in Azerbaijan moved me. Kenny gracefully evoked the mixture of love and exasperation professors feel for students. He hates when they text in class, but his pride radiates when he describes accompanying his students to man-on-the-street interviews: “In Fountain Square and the older sections of Baku the three women who have paid the closest attention in class, Gunel, Lala and Neza, impress me with their willingness to walk up to strangers and get them to talk. They ask the same question, ‘What makes you happy?’”

In the last part of the book, Kenny tacks on a pair of essays about becoming a father again at age 60. Here, Kenny is appealingly vulnerable, talking openly about the relentless math that rations out his time with this new person. “There will never be such a time again,” he writes of a month spent in Italy with his wife and daughter. “There may be better times, times just as good, certainly; but inevitable change is fierce, uncompromising.” Kenny’s next book is a memoir of raising his daughter. It’s a wise choice for Kenny to turn from topics where he can hide behind journalistic objectivity to one where that detachment simply isn’t available, and he is forced to let his readers know just what he thinks of the world, whether far away or closer to home.

Timothy Kenny’s essay “Duckpin Bowling with Caitlin and Buffalo Bill” appears in Issue No. 2 of Cleaver.