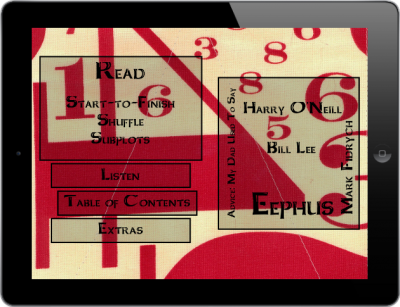 Reviewed by Anna Strong
Kevin Varrone’s Box Score: An Autobiography spans across form — from autobiography to history to visual art to the baseball rulebook to the prose poem — content, and reading experience. Presented as a highly interactive free iPad and (by early June 2013)  iPhone app, Varrone’s text, which he calls an autobiography, does almost everything in its power to thwart that somewhat restrictive classification. “Box Score” is made of a series of prose poems, each of which invokes Philadelphia history, baseball history (e.g. the first night game ever played between the Phillies and the Reds) Philadelphia baseball, a speaker’s personal recollections (“police your area my dad would say as he smoothed dirt around the first base bag w/ his foot after a bad hop ate me up”), baseball terminology (page 78 is simply a line of a batter’s statistics: g: 1 ab: 0 r: 0 h: 0 2b: 0 3b: 0 hr: 0 avg: .000), found language (Harry Kalas’ famous “outta here” long ball call appears on page 73), and lyrical, evocative images that seem disembodied from — and beautifully juxtapose — the rest of the language (“I’d pick dandelions & snap their heads before they turned to wishes,” page 19). 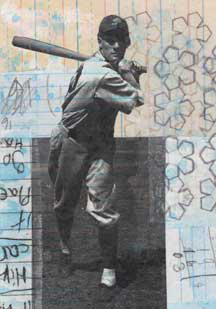 Each poem’s internal complexity is compounded by three other factors that enhance and alter the reading experience of the individual poem and the entire text. First, the if the reader chooses to read the poems “start to finish,” the series of poems appear in a kind of wheel — the reader can flick their finger left or right and tap a “page” to reveal the poem. Although each page is numbered in chronological order, because of the circularity of the presentation, the reader does not feel bound to read each poem in its proper sequence. It’s much more fun — and probably encouraged — to flick through at random. 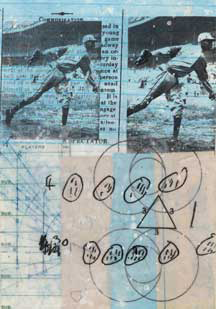 Secondly, each poem has a visual element, and these are photographs of Philadelphia, Philadelphia baseball parks like Veteran’s Stadium, color photos of children playing Little League and in backyards, and collage “postcards” made by Madison, Wisconsin-based artist Randel Plowman. Each poem thus becomes a literary baseball card, with the featured player(s) or place on the front and a poem on the back. The visual component enhances the text’s deep connection to all things Philadelphia and plays on the concept of the text as an autobiography. A collection of baseball cards is something highly important to a avid baseball fan, representing both baseball history as a whole and a personal connection to the game: favorite players, favorite teams, in some cases competition with friends over who has the better collection, and in many cases a huge collection built over many, many years. In that sense, a collection of baseball cards accomplishes much of what “Box Score” itself accomplishes: it’s a total history and a personal one, built over many years of fandom and study. 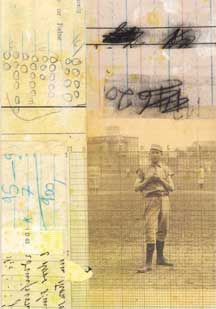 The text also incorporates an auditory element — each poem has an accompanying recording, and each poem is read by a different person. Varrone asked nearly eighty fellow artists and writers to perform the poems. The effect — of one unified tone throughout all the poems but different actual voices reading them — plays with the text as an autobiographical account of a childhood spent playing and watching baseball in Philadelphia. The poems are filled with personal moments of introspection, reflection, and recollection, but they take on a collective history with the other readers and with the city and the game that concern the poems so deeply. 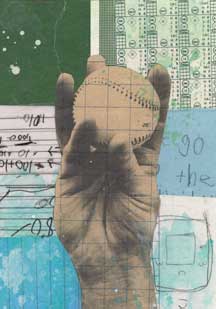 Finally, the reader is just as implicated in this collective history as Varrone and his fellow readers. The interactivity of the app, and the way it encourages a reader-personal journey through the text, makes it an autobiography that belongs as much to the reader as it does to the writer and the city. It’s different than thumbing through a book at leisure, because each poem has visual and auditory and tactile components that ask to be read and experienced each in their own turn — once you’ve started reading, it’s impossible to not give each poem its due.

Box Score is a tremendous achievement in so many ways — it implicates the reader using technology and tactile interactivity that not many other, if any, other works of poetry can claim, and it manages to combine personal, sports, and urban history in 79 gorgeous poems. Varrone shows us that there is no such thing as a singluar, personal, linear narrative — we’re all caught up inextricably with our friends — Varrone’s fellow readers, our places — in this case Philadelphia — and our passions — in this case baseball.