DUCKPIN BOWLING WITH CAITLIN AND BUFFALO BILL
by Timothy Kenny

Buffalo Bill’s
defunct
who used to
ride a watersmooth-silver
stallion
and break onetwothreefourfive pigeonsjustlikethat
Jesus
he was a handsome man
and what i want to know is
how do you like your blueeyed boy
Mister Death
— E.E. Cummings 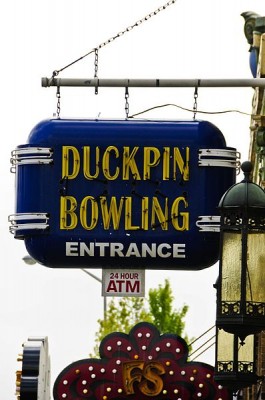 Caitlin scoots first into our local bowling emporium (small town/duckpin only), where we are met by the same musty/mildew odor that has always greeted us, despite a new birthday-view rug that rolls colored confetti and pointed hats and noise-making horns across the floor. The old indoor-outdoor carpeting has fled, leaving dead air to hang in its place, a week-old washcloth on a sink.

We grab shoes. Caitlin slides on the polished lanes, a “watersmooth-silver stallion,” which kick-starts Buffalo Bill inside my head. The bowling guy — a high school kid, really — drops the bumpers into the gutters and we’re off: first her, then me, then she, then me, back and forth, we’re counting pins, writing down numbers, carrying ones over into the next column. A half hour later it’s the tenth frame and the final score is Caitlin 73, me 72, a dad’s duckpin-bowling miracle.

We go to pay. The gray-haired lady behind the desk who earlier handed out smooth-bottomed shoes that Velcro for convenience right off the bat tells me about the senior league that meets Monday and Thursday mornings.

Watching me? Good bowler? What is she saying?

“We have bowlers of all ages. Some are pretty good.” A beat. “OK, not that good but ok, you know?”

She brightens: “Some of our bowlers are in their eighties.”

I provide my impression of a smile. We flee.

An hour is slow-motion death for a person who’s six. It’s odd. People who are six have logged 52,560 hours of life, which sounds like a lot until it’s measured against my 578,160 hours, perhaps four of which have been spent duckpin bowling.
I memorized “Buffalo Bill’s defunct” in college to impress girls. It’s short. I love Bill Cody. He salted Europe with the romance of the American cowboy and was indeed a top hand himself. I love e.e. cummings more. Never mind that. “What I want to know is” not why I am silently reciting “Buffalo Bill’s defunct” but how can I stop seven?

Caitlin asks: “Why is six afraid of seven?” I don’t know, I say. I never know. It ruins everything to know.

“Because seven ate nine.” Followed immediately by, “Get it?” I always say no, asking instead: “What do you mean?”

She tells the joke again. I pause, appearing thoughtful. “Oooooo, Nowwww I get it.” She laughs, grateful for my stupidity.
In two months we’re done with six; seven looms large, another step closer to the unending march of numbers that double up the digits. The joke should be, “Why is sixty-seven afraid of seven?”

The answer is: “Because seven is three from ten, when the slope gets slippery.” I know it’s not funny. Painful things are not always funny.

No one ever said about me, “Jesus, he was a handsome man,” but I traveled and had company expense money before gravity rear-ended me. Thankfully, good luck intervened.

“Daddy,” says Caitlin, “look,” pointing: “Air hockey.” She motions me low and whispers in my ear, “I love air hockey.”
We shoo away a gaggle of little kids who are fooling around at the air hockey table but don’t have any money. Caitlin drops in four quarters. They make a satisfying ca-chunk; not as serious as the thump of balls dropped into the business end of a tavern pool table, not like breaking “onetwothreefourfive pigeonsjustlike that,” but then what is? Bill was a seriously good marksman.

From the Midwest like I am the only thing in bowling was regular big balls, the kind with three holes drilled in, sometimes two. It was easier than these duckpin midgets.

Two weeks ago my daughter scored her “worst Sunday ever.” It started at this same bowling alley, which should be named “Memory Lanes.” Get it? That’s why we’re back. It was previously filled with tournament bowlers who lurched from lane to lane, keeping score the right way, ringing up loud strikes that threw the fat-ass little pins into the back of the alley like a crack-back block. We could not bowl, though half the lanes were empty.

Caitlin wondered why my answer made no sense.

I suggested shooting pool; she brightened. But no, renovations to the pool hall; no can do. Her face yo-yo’d. The air hockey machine ate quarters gleefully – a banker selling a balloon-payment house loan to a janitor – but refused to cough up the sliding disc or poof the pillow of air that turns a slow plastic table into air hockey.

Soured, we retreated to across the pulsating birthday floor to the nameless machine that drops a metal claw into a pile of plush animals for seventy-five cents. It did what these machines are intended to do: randomly dropped its yawning claw, closed it around thin air, wound itself to the top of the plastic case and dangled, spent and empty.
We drove to Starbucks. Caitlin ate a morning bun and brightened. Not much later soccer practice was cancelled. Thus born: her “worst Sunday ever.”

I am no “blueeyed boy” – hazel rather – from cummings’ undeniable imagination, but really, and this is the important part: Does Caitlin understand – and I say no, it’s way too early for her to get it – that I’ve finally stopped worrying. I have come to an understanding with “Mister Death.” I know he lurks. If I turn my head sharply I catch him in the distance, out of the corner of my eye: shadow-dwelling, shape-shifting sumbitch. Lurking. 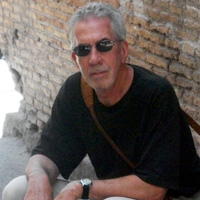 Timothy Kenny is a former newspaper foreign editor, non-profit foundation executive, and college journalism professor. He reported widely from Central and Eastern Europe, including Croatia and Bosnia during the early stages of the Balkan conflicts in the 1990s, and has taught journalism as a Fulbright scholar at the University of Bucharest. He lived in Kosovo for a year and worked more recently in Georgia, Kyrgyzstan and Afghanistan. Kenny’s narrative nonfiction has appeared in The Louisville Review, The Gettysburg Review, Irish Pages, The Kenyon Review Online, the Green Mountains Review, and elsewhere.