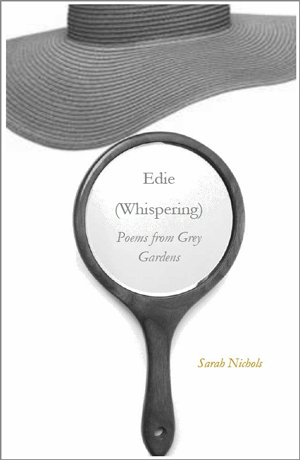 The cover of Sarah Nichols’ latest chapbook is evocative. How do its images prepare us for what’s inside? We are presented with an oversized sun hat and mirror. At first I thought the mirror was a magnifying glass. A beginning note informs us that the text is sourced from Grey Gardens, the documentary directed by Albert and David Maysles. The 1976 cult film profiles Edith “Big Edie” Bouvier Beale and Edith “Little Edie” Beale, two eccentric former socialites who are noted for being Jackie Onassis’ aunt and cousin, respectively. Together they live in relative isolation amongst raccoons, cats, and fleas at Grey Gardens, their dilapidated 28-room estate in East Hampton, NY. Over the years the women, particularly Little Edie, have become camp icons, remembered as precocious misfits shunned by (or shunning?) upper class morality and ethics. Despite their precarious living situations, the Edies make time for singing, for dancing, for costumes, for pontification, for recalling. Under their rule, Grey Gardens transforms into a space of performances and guises, a seemingly eternal stage.

Why must Edie whisper? Which Edie speaks? The poems themselves are sculpted from dialogue spoke by either Little Edie or Big Edie. The poems do not “announce” who speaks; sometimes it’s clear who the voice belongs to. Most times their perspectives flow into the other, making a line of distinction between the two blurry and hard to find. Despite the clash of personalities, Little Edie’s voice threads through and permeates the collection. The very first poem plunges us into her world view:

The break after “and I” recurs throughout other poems, usually when expressing a contrarian thought or feeling. The break also provides a sense of space, breath, hesitation. It is a moment to sit back and reflect. The spaces before the question marks create a similar sense of pause. In one way, the text enacts the particular cadence and drawl of Little Edie’s actual speaking voice. Nichols recounts, in an interview with Carpe Noctem, that her process included pouring over the transcripts collected in the book Grey Gardens, by Sara and Rebekah Maysles, as well as watching the film numerous times. As she watched and re-watched the film she came upon the realization that Little Edie spoke in poems. Nichols explains that “her daily speech, how she was interpreting, and living in the world, was colorful, imagistic.” These poems certainly capture the musicality of Little’s Edie’s voice, her way of transmuting the dreariness of her situation.

At the same time, the breaks and unusual rhythms in the text mimic a whispering sound and motion. On the surface there is the performance of Little Edie’s dissatisfaction with her surroundings, her mother’s (mis)remembering, her own ennui. Her admonishments also ring out on a subconscious level, one in which she seems to constantly resound: Mother do you realize I am not you? Subtly, she name ways in which she stands apart. How is this mother-daughter relationship symbiotic and parasitic?

The second poem that follows, “Mrs. Beale”, could be read as a response to “Mother Do You Realize” from Big Edie. It begins:

I have such a vivid memory. Don’t believe
a word of it, kido. Not a word.

I looked younger than any of the debutantes, and
I went around in sheets. 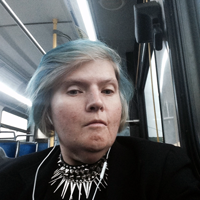 Contradictions abound. Mrs. Beale champions the brilliancy of her memory before warning that not a word of it should be believed. If this is a response to the first poem, Big Edie dances around her daughter’s objections by focusing on her youth and subversive behavior. Is remembering another kind of performance? Both Edies harbor creative inclinations: Big Edie often refers to working as a concert singer, while Little Edie pursued modeling, cabaret singing, and acting. Neither woman achieves the height they feel they deserve. The past hangs thick and heavy at Grey Gardens; in the film, the Edies spend most of their time conjuring long ago sights, passions, desires, and could-have-beens. Grey Gardens cradles their illusions and frustrations. The present situation is constantly rewritten and intruded on by past preoccupations. The ‘sheets’ in the above excerpt bring to mind the repeating motif of costume and disguise. Why does Edie insist on veils?

Nichols’ poems convey an inertia too forceful to overcome. Little Edie often expresses her sense of claustrophobia—she finds herself frequently caught “between [her] mother and this place,” bouncing between a murderous impulse to leave and a rabid insistence on the impossibility. “Grey Gardens” enacts this suspension:

Everything disappears in this place,
and we
couldn’t possibly leave.

Night after night, morning after morning, the ghosts
hold our breath

Who is the lost woman mentioned at the end of this poem? Her mother? An apparition? Little Edie’s splintering self? Before reading this collection I had not thought of Grey Gardens as a gothic narrative. There are mentions of phantoms, hauntings, ruined houses, madness. The poems murmur what the film cannot say aloud:

that note,
my heart,
what happened ?

Despite the decay, the Edies view life as a play, as radio entertainment, living becomes a song, a film breaking down. They cannot fully flourish as they wish, despite their wealth and privilege, so they burrow into spectacular fantasy. To believe is to transform, to transport, to remove yourself. To believe is to leave without moving. There are moments when the speaker seems to reach out to the reader. In the above quote, Big Edie wonders why before conceding that she is lost in repetition. “Memorabilia” finds Little Edie unable to part with the woman she used to be, as signified by clothes, make-up and accessories. She too must ask, “Why? What / happened?” before admitting, “I can’t tell.”

“Memorabilia” returns us to the cover, to the image of the hat floating over the mirror. The placement is interesting. The text from “Memorabilia” is sourced from a scene wherein Little Edie regards herself in the mirror. The cover calls back to this moment of reflection. Whose image does she see? How is Little Edie trapped behind the force of her mother?

The house
take me into herself.

By the end of the collection, the house is the mother and the mother is the house, devouring and sheltering. Identities merge and break repeatedly. Nichol’s poems rise up from seemingly empty ground, offering a portrait of the contentious undercurrents of a mother-daughter bond so fierce it becomes a swirling vortex.

Allison Noelle Conner works an assistant fiction editor for The Offing. Her writing has appeared in ATTN:, Jacket2, Entropy, The Art Book Review, and elsewhere. Currently, she is at work on her first book, a prose project exploring institutionalization, black women geographies, and possessions.