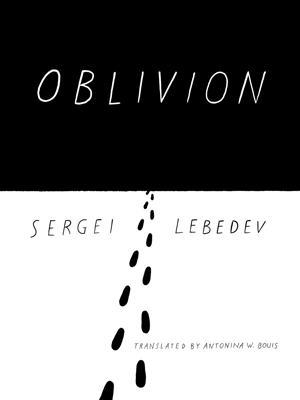 There are (supposedly) only two types of narratives. The first is the story of a person going on a journey. The second, a kind of inverse of the first, is the story of a stranger who comes to town. Whether or not you subscribe to this idea of only two narrative types (I, personally, do not), the journey narrative is one of the oldest and most human stories in all of literature. And because “the journey” is such a familiar kind of story, those novels, stories, or memoirs that take that motif and spin it in new and interesting directions also dramatically reshape the parameters and expectations of literature.

Oblivion, by Sergei Lebedev, is one such novel. In the case of his story, Lebedev has blended the two narrative types in order to emphasize the extreme importance of words. This may sound somewhat redundant. Words, after all, are everything to the novelist. But, for Lebedev, words not only have the power to describe a journey (and, therefore, bring the reader along that journey), they have the power to save history from being forgotten. This is of prime concern for the unnamed narrator of Oblivion, who embarks on a journey to Siberia on the trail of a stranger who became an adopted family member, an old, blind man known only as Grandfather II. The old man had arrived years before in the narrator’s town on the eve of the narrator’s birth and soon became the narrator’s prime protector: “He perhaps unconsciously—tried to bring me up in order to untie some knot in the past, to solve a drama that made him what he was.” Along the way the narrator visits the forced labor camps (or gulags) that have been abandoned, forgotten, and nearly obliterated from Soviet-era history in Russia. 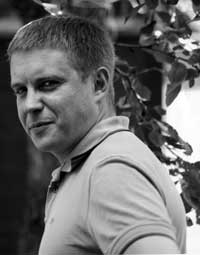 The narrator grows up and becomes a geologist who frequently travels north to study abandoned deposit mines. Although Lebedev never specifies the locations of the mines, cities, or gulags that the narrator visits, these abandoned prisons still stand in Northern Russia. People still live in the towns that were built around them. For example, Vorkuta, a city and forced labor camp in Northern Russia, had nearly two million prisoners from its founding in 1931 until the closure of its labor camp in 1957. These prisoners came from the USSR and 21 other countries, mining coal in the Ural Mountains as part of their prison sentences for speaking out against Stalin, undermining the authoritarian aggression of communism, or performing other crimes against the state.

As I read Oblivion, I often longed for such context, a few details about the gulags that could dispel my ignorance as an American who has not witnessed such inhumane systems of treatment (all of which contributed to the economic power of a repressive and corrupt system of government). I wanted to understand the full weight of this Soviet era practice of forced labor prison systems. But after I finished the novel—and traveled the journey of words with the narrator—I understood that Lebedev had deliberately left out specifics and names and facts in order to evoke the white-blinding effect of oblivion. The prose, and the shape of the prose, is both disorientating and an extreme protest against oblivion. Lebedev’s sentences, lovingly linked with semicolons, sometimes stretch as long as a paragraph and, especially initially, the hybrid, organized stream of consciousness style can be overwhelming.

Give this a try:

One day—I am getting ahead of myself—I understood, naively, childishly, that seeing is a mirror; we see not people but how people are reflected in us; I thought I had discovered a secret and all I needed was to figure out how to get beyond my own gaze to see what you’re not supposed to be able to see.

Eventually, the narrator discovers that Grandfather II was once the warden and founder of a prison camp. He uncovers all of Grandfather II’s past—the history of an unnamed town, built around a defunct and unnamed gulag, which was once filled with prisoners, who, likewise were “unnamed” and renamed with numbers—and follows Grandfather II’s journey deep into the islands of the Arctic Circle, where other prisoners were transported and abandoned. During all this, the narrator focuses only on moving forward. “I did not think about how I would return,” he says,

the thought of returning would have turned my search for the island into a round-trip. But you couldn’t reach the island and then come back the same way—that contradicted its finality, the point’s absoluteness.

By retracting Grandfather II’s journey, the narrator achieves his ultimate goal: to uncover Grandfather II’s past and to save that history from the complete and utter annihilation of not only being forgotten, but of being completely unwritten from the annals of Russian history.

The noble aim of the book sometimes gets in the way of telling the story, which can be difficult to parse from the long (and stunningly beautiful) descriptions of newspaper research, train travel, the quarry of the gulag, the prisoner islands in the Arctic Ocean, etc. And in total, Lebedev only writes five or six quoted lines of dialogue. This is not to say that all novels should be organized in the same way—with specifically poignant exposition and characters with copious lines of dialogue—but rather that authors are capable of breaking all “the rules” so long as the initial promise of the novel is fulfilled by the end.

But with Oblivion, I’m not sure Lebedev has delivered on the promise to untie the knot of the past, to save history from oblivion. The unnamed narrator reclaims a part of himself that, previously, he had wanted to completely ignore, but what of the other characters in the book who all too willingly conceal the truth? Perhaps Lebedev offers his readers the choice to seek out the truth. He has not solved the problem of oblivion, but rather made us aware that willful ignorance, like a transfusion of blood, can be passed down generations and that the journey to understanding is a one way trip.