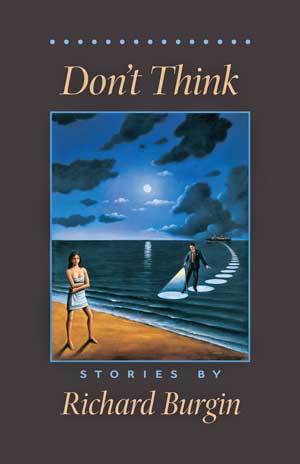 When you read Richard Burgin’s fiction, be prepared to slip into the lives of the neurotic, the slightly or very twisted, the disconnected, and the agonizingly lonely. And expect to find yourself sympathizing with them.

Don’t Think, Burgin’s newest collection of short stories (and his nineteenth book), is one of his very best. The author’s straightforward and suspense-driven storytelling voice is as compelling as ever, the stories somewhat spooky and darkly comic. They give you the willies and keep you coming back for more. But Burgin, in this latest collection, demonstrates a new empathy for his characters. This notable evolution gives the characters softer landings and a fuller resonance in the reader’s imagination.

The protagonists of Don’t Think are mostly single middle-aged men, isolated souls detached from parents, siblings, children, ex-lovers, and the few friends they ever had. The rest of the dramatis personae comprise drug dealers, prostitutes, molesters, users, charlatans, rivals, and seducers, many of whom turn on the hapless stiffs who venture into their webs.

The book opens with the relentlessly lyrical and meditative story “Don’t Think,” which is narrated in the second person. The main character tries to reassure himself that bad memories, rejections by parents and brother, breakups with spouse and lover, and his son’s Asperger’s Syndrome should be replaced with grander thoughts. Think of ultimate things, he tells himself: the mysteries of the universe and how it came to exist. All that, however, proves vain. What grips the soul is the human; above all, what grips this speaker is his connection, however challenged, with his son. “It’s selfish,” the story concludes, “in a way, to love a world where there is so much suffering. But don’t think of that.” Think of your son, says the speaker, “of the love in his eyes. Think of all of this as long as you can.” 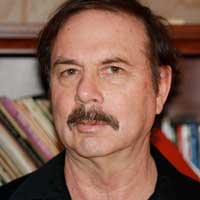 Richard Burgin is the winner of five Pushcart Prizes and the editor and publisher of the distinguished literary magazine Boulevard. His signature brilliance comes with high-concept stories in the vein of an earlier classic, “The Identity Club,” a tale about a cultural society and the fatal pledge that comes with membership. Don’t Think features several stories in this mode. “The House Visitor,” a story I especially love, follows the exploits of a lonely man obsessed with sneaking into people’s houses when they are away. The man’s aim, though completely weird, is sad and innocent: he wishes to sample for short spells the love and comfort of a family home. He never comes to steal, only to soak up the ambiance of a life lived with others. The story layers his comic-transgressive intrusions with harrowing memories of the abuse he suffered in his childhood home. On the night the story takes place, he enters the home of a mother and young daughter while they are out trick-or-treating on Halloween. Dramatic tension peaks when the mom and daughter return home.

Unforgettable also is another high-concept story, “V. I. N.” An acronym for “Victims of Infinity and Nothingness,” V. I. N. is an existentialist support group. That is a hilarious idea, but it loses its funniness as the story progresses. At meetings, the participants are supposed to share lofty observations about ontological matters, sometimes garnering applause. In the view of Whitman, the charismatic charlatan poised to take over the club in a sort-of-coup, V.I.N.’s opposition to “establishment morality” gives him license to betray a lover, deal drugs, and generally behave in any way he chooses. Rogers, the hapless loner, who originally looked up to Whitman, eventually decides that being lonely is better than being in Whitman’s thrall.

Burgin’s pithy observations, often delivered under comic circumstances, add more surprise. While hiding in the house he invaded, the main character in “The House Visitor” needs to pee. “But I certainly can’t give into that impulse either. Civilization,” he says, “is basically the repression of impulses.” Not that he represses his impulse to invade people’s houses. Further on in “The House Visitor,” the character says, “ I look at people a little differently than most—as aliens. It makes them seem tremendously compelling.” In “The Intruder,” a story about a lonely disabled man who shelters a young female vagabond, the insomnia-stricken protagonist observes, “Life is adverse to solving things, though it camouflages problems temporarily with pleasure.”

The stories, for the most part, take place in New York, Philadelphia, and St. Louis, and the urban locales set the stage for their share of disturbing, seedy, and melancholy encounters. Burgin’s familiar tropes notwithstanding, Don’t Think ushers in something new for this author. His stories still creep around you like a low fog, but an endearing new gentleness is also at foot. Many of the characters seem more likable and more self-aware. Maybe some of them are older and wiser; maybe some of them want to be nicer to themselves. Maybe the author wants to be nicer to them.

In “The Chill,” for example, a frightened and friendless man, after a harrowing and disastrous day of attempting human connection, ultimately finds warmth and comfort as he gazes on photos of his loving parents. It takes a long-ago and faraway memory to bring the man a little solace, but Burgin grants the man that relief. In “Olympia,” we again see the author’s kinder and more understanding approach to his characters. This story tracks the long on-again, off-again affair between an older, wealthy, famous female theatrical and movie producer and the younger male photographer she uses for sex and companionship. Olympia’s promises to boost the younger man’s artistic career never fully materialize; she continually commands the spotlight. Additionally, she torments him by alternately coddling and unpredictably raging at him. The story however, achieves a peaceful ending. Although the younger man moves away, the two ex-lovers stay in touch. Their bond endures thanks to sporadic communications. As the main character notes, “we managed to share an adventure that for some reason life decided we should go through together, or as together as people like us could ever be.”

For Burgin’s characters, this may be as solid as connection gets. Nevertheless, closeness, or approximations of closeness, seem more achieved here than in the author’s previous books. The end result is that Don’t Think ranks as one of Burgin’s most gripping and memorable, a collection that still makes me feel uneasy but which also makes me a little happier for the lonely, used, and unappreciated people who live in his fictions.

Lynn Levin’s newest books are the poetry collection Miss Plastique (Ragged Sky, 2013), a Next Generation Indie Book Awards finalist in poetry, and Birds on the Kiswar Tree (2Leaf Press, 2014), a translation from the Spanish of a collection of poems by the Peruvian Andean poet Odi Gonzales. She is co-author of Poems for the Writing: Prompts for Poets (Texture Press, 2013), a Next Generation Indie Book Awards finalist in education/academic books. Her poems, essays, short fiction, and translations have appeared in Painted Bride Quarterly, Michigan Quarterly Review, Cleaver, The Hopkins Review, Rattle, Young Adult Review Network, and other places. She teaches at Drexel University and the University of Pennsylvania.