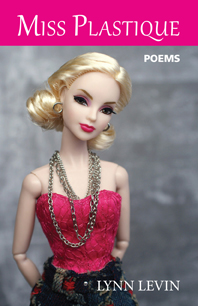 I should have know from the cover of Lynn Levin’s book that I would be able to connect with the poems inside on a very visceral level: that blond doll, with the thick cat eye eyeliner, all blonde and coiffed, with head tipped—yeah, I get it. When I played with my Barbie dolls, they broke rules, they were well-dressed rebels, and they smiled in your face, but plotted their escape behind your back.

Lynn Levin writes of a generation here—my generation, her generation, our generation, but her themes are universal, though some of the particulars, some details give a throb to the heart because, well, recognition in any form is a powerful thing. She slips in details you think you may have forgotten about your young life long past, but realize they’ve only been coiled tight inside, waiting to be recalled. Levin writes with a ferocious tenacity, all arterial memory, lust, found power, and raw regret like you imagine a Miss Plastique would be if she were real.

The illusion of the “gentle” days of Leave it to Beaver, lettermen, Wally and Eddie Haskell are in the collective memory of those of a certain age and a curious throwback to those not even close to that age. But she turns that squeaky clean image on its head, shows us the underbelly of what we were fed a daily diet of, making us a nation of neurotics searching for happiness.  Do I extrapolate too much?  Maybe, but this is what Levin’s poetry demand:  reader participation. She dares you, she teases:

Sometimes I wished my parents were like June and Ward
but I always laughed when Eddie Haskell messed with Beaver.

Yeah, we all liked that, actually. Eddie was subversive—a rare attribute in the land of three-channel television milquetoast.   The bad boys had prominence and admiration in our eyes. Other obsessions were hair.  In “Dippity-Do” hair is the object of scorn, especially if it was not poker straight, all the rage on Carnaby Street.   Dippity-Do’d up with rollers helped to straighten things out.

I hated my hair and wished it were straight
so that I could wear it
in a swing or the London Look.

Also I wished my father
didn’t get mad almost every night.

Once he knocked
all the rollers from my head.
The few bobby pins left
dangled like snot
from the wild curls I’d finally caught
with just enough Dippity-do.

There is a triumphant rise in so many poems, just like the ending of this one:

I think that that set took me an hour.
After that, I let my hair go free.
The straight kids thought I was a head.
You look like Janis Joplin, the hippies said.
And hey, that was good enough for me.

But in the end these poems are realizations of a life lived, what has become of opportunities lost and found, and disasters averted. But oh the honesty, a hallmark of Levin’s writing that makes me savor her words on the page.

Oh, to rise from my nervousness like a carp
from a dark pool or eat half portions when I crave
the whole poison. What soap can wash away
my foolishness or deep years wake me?

Here is a life not without regrets, but one lived, on every level. What remains is that ever-present bedrock of truth.

Michelle Reale is an academic librarian on faculty at Arcadia University in the suburbs of Philadelphia. Her fiction and poetry have been published in a variety of online and print publications. She is the author of 3 chapbooks of fiction and poetry and another forthcoming in 2013. She has been twice nominated for a Pushcart Prize. She blogs on immigration, migration and social justice in the Sicilian context at www.sempresicilia.wordpress.com.