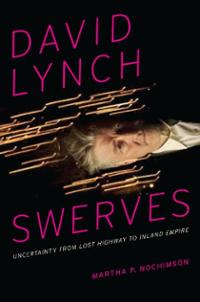 In David Lynch Swerves: Uncertainty Through Lost Highway to Inland Empire, Martha P. Nochimson presents a radical interpretation of David Lynch’s last four movies. She rejects the popular critical interpretations of his work, in favor of her own theory: a complicated mix of eastern philosophy and quantum physics. It’s fascinating, challenging, frustrating, and only intermittently persuasive.

Her ideas are compelling, especially when she’s addressing Lynch’s philosophy. As a devoted believer in Hinduism and tantric meditation, Lynch creates movies with strong spiritual components. They are intense stories, and his characters are often emotionally troubled. Nochimson clearly and thoughtfully explains Lynch’s repeating themes of the dangers of life lived in the service of greed and ambition, and his commitment to spiritual peace over material satisfaction.

But it’s her more radical, scientific ideas that are troublesome. Quantum physics isn’t exactly simple, and frankly, I don’t have enough knowledge on that subject to understand anything beyond her most superficial points. But here’s the part that’s tricky: the book is unclear as to whether or not Lynch does, either.

When Nochimson uses quantum physics to clear up some seemingly inexplicable plot development in one of Lynch’s films, the explanation makes sense. But the logic is all hers. She doesn’t offer much in the way of proof that it was what Lynch had in mind. All we have are her assurances that her interpretations are what he had in mind all along. Lynch’s work is deeply rooted in the subconscious; he famously dislikes offering explanations of his own work. But he does freely admit that he’s often not sure what he’s doing until it’s finished. It is difficult to accept the idea that Lynch was always aware of the very logical, scientific principles of quantum physics, while simultaneously free associating.

The index contains segments of Nochimson’s interview with Lynch. She doesn’t include the entire interview because Lynch felt it was too intimate and asked her to leave some out. Perhaps in those missing segments Lynch talks at great length about his interest and research in the field of quantum physics. But it’s nowhere in the book; Lynch doesn’t mention anything to the effect that he is particularly knowledgeable on the subject. In fact, when Nochimson occasionally asks him if he’s familiar with certain terms or concepts he says he is not.

But does any of this even matter? If art unintentionally overlaps with another philosophy or perspective, does that make it less valid than if the overlap was intentional? It’s a sure bet David Lynch doesn’t think so–if he did, he’d bend over backward to explain to everyone exactly what he meant by every choice he ever made. Art exists to be experienced, thought about, and discussed. Once it’s out of the artist’s hands, it belongs to the world to do with what it will.

None of this is to say that David Lynch Swerves isn’t an interesting book, or that Nochimson’s ideas don’t make sense. It is, and they do. And it gave me a clue of how to think about Lost Highway without wanting to slam my head into a wall until I passed out. Which is great, because that movie’s been driving me nuts for sixteen fucking years now. Too bad Nochimson didn’t present these ideas as her own, instead of insisting they were Lynch’s.