ONE OUT OF TWO 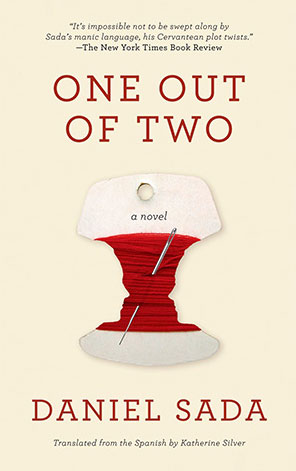 Daniel Sada’s One Out of Two is beautiful and bizarre. The novel, translated by the prolific Spanish-to-English translator, Katherine Silver, follows the Gamal sisters, furiously hard-working and identical middle-aged twins who work as seamstresses in the small town of Ocampo, Mexico. A sign hanging in their shop reads: “WE ARE BUSY PROFESSIONALS. RESTRICT YOUR CONVERSATION TO THE BUSINESS AT HAND. PLEASE DO NOT DISTURB US FOR NO REASON. SINCERELY: THE GAMAL SISTERS.” These women have no patience for the dilly-dallying or the gossip of their fellow townspeople. Instead, they are content—at least initially—to focus almost entirely on their work, “without so much as a twinge of longing, confident that their daily and incessant toil will yield wonders, that good fortune is bound to result from great effort…”

But a wedding invitation from their aunt arrives encouraging them to use the event as an opportunity to meet potential husbands. Until this moment the sisters seemed content to be spinsters. But the invitation unleashes repressed desire for romantic love: “Constitución and Gloria found in that invitation—by all measures, kind—the key to their perhaps most deeply buried preoccupation.” However, the sisters decide that they both can’t possibly attend the wedding and flip a coin to determine which one of them will go in search of a suitor. Constitución—the winning sister—returns from the wedding having “danced all night with a slender man of interesting age.”

One Out of Two, while slim, is dense in ideas, about conventions and conservatism; about people’s desire for love and sex; about the insidiousness of the patriarchy; about tradition and the security of routine. These themes, along with the sisters’ surprising ultimate decision regarding the suitor, pulls the reader through and beckons her to read again. 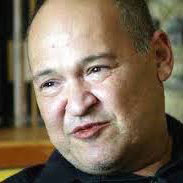 Sada, who frequently wrote in meter—a consequence, he said, of a classical education—was thought of as a baroque writer, a term he bristled against. “ I would like to be a writer without adjectives, because I know that grants me all the liberty in the world, including my tendency to measure my prose.” Sada’s contemporary Roberto Bolaño considered him one of the greatest writers of their generation. Both novelists were born in 1953 and both died young, Bolaño in 2003 and Sada eight years later, in 2011. The American writer Francisco Goodman wrote, in the Paris Review, at the time of Sada’s death:

Bolaño must have relied, at least to some extent, on Sada’s novels—Sada’s perfect ear and exuberant re-creation of Mexican voices, the voices of the Mexican desert north especially—while writing his own Mexican masterpieces. Sada’s works were a polyphonic parade of voices, a Mexican cacophony: shouts, laughter, violent, lewd curses, sweet whispers, song.

Sada was the author of eight volumes of short stories, nine novels, and three books of poetry. He was the recipient of various awards, including Mexico’s most prestigious literary award, the National Prize for Arts and Sciences for Literature, which he received mere hours before his death. Yet for all his influence on Latin American literature, Out of Two is only the second of Sada’s books to be translated to English. The other, Almost Never, was also published by Graywolf Press and translated by Katharine Silver.

One Out of Two exemplifies Sada’s Joycean style. The writing moves fast and has qualities that hint at a fevered dream—a breathless intensity. The style is on display in this passage, which begins with the twins’ aunt figuring out the amount of their inheritance but shifts subtly into their heads as they waited to claim it:

Hence, in the act, the magic of numbers pulsated. Division and subtraction, the rule of threes, and: the phantom sum shimmered when named, turning into an object of longing because it was so wholly unsuspected. Like a tree of possibilities. Dreaming of the future through long and sleepless nights, so long, in fact, that they sometimes nodded off at work; their output as seamstresses decreased, and that’s why they made an enormous effort—the unwholesome athleticism of maintaining a more or less cheerful countenance in the bosom of that large family, especially while also: working brutally long hours—and recovered their determination, aware that their imagination had cut them off from the world.

The Gamal sisters eventually decide to share the suitor—without ever cluing him in on the fact that there are two of them. But as Sada explains, “The bad part is that those women were deceiving him, not out of treachery but rather sisterhood.”

Kim Steele lives in Chicago, where she spends most days reading near the space heater. She has been previously published in the flash fiction zine Oblong and writes the occasional book review for Cleaver Magazine. You can follow her on twitter at KJ_Steele.