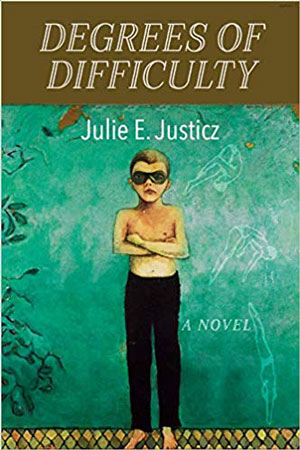 Many years ago, as a feature writer for a magazine, I spent weeks visiting with a family whose oldest son communicated not with words but with his body. He said yes or no, go away or come near, I don’t want it or I do by hurling himself toward gestures of acceptance or disdain. He was a beautiful boy, nearly adolescent, larger than his mother who was struggling now to control his outbursts by setting him into a warm bath or hugging him close and overwhelming to his father, who had left his job so that he might try to build a school that was just right for his own son and others. This family was among the most extraordinary I’ve ever spent time with—full of love, chasing hope, unwilling to give up on this first-born child of theirs, and yet so devastatingly exhausted.

I thought a lot about this family as I read Julie Justicz’s novel Degrees of Difficulty. Here the child at the center of the heartbreak is third-born Ben, born with damage to his twenty-first chromosome, an “omission in the blueprint” that has resulted in “the recessed jaw that would lead to feeding issues, the missing kidney due to frequent injections, hospitalizations, IV medications. And later, the seizures: Body-wracking grand mals that daily medications could not control.” 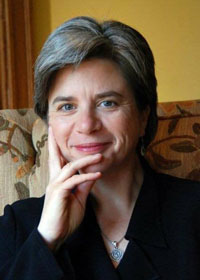 Ben is a young teen when we meet him. Attempts to find a boarding school where he might fit in have failed, mostly coming to violent ends. Perry, the father, keeps searching for a placement—leaving home often on his quest. Caroline, the Shakespeare-expert academic mother, can’t maintain her focus, can’t do much of anything, in time, but swirl a sedative into her tea. Hugo, the middle child, understands his brother best of all. Ivy, the oldest, can’t wait to leave home. Ben’s fractured chromosome is the primary narrative in each character’s life, and each character is presented separately by chapter, fracture by fracture.

The story begins in April 1991. It ends in April 2008. Sometimes chapters will close just as the crescendo of a crisis is reaching its fever pitch, leaving the reader to turn to the page toward a scene from months or years later, when the aftermath of the terror has now been woven into the characters’ new realities—a marriage under strain, a daughter in revolt, a middle child assuming increasing responsibility for Ben. We soon keep our eye primarily on Hugo, whose love for his brother and his ability to understand him have been rendered with heartbreaking tenderness.

Here, in the early pages, Hugo is rigging up a tricycle so that he might give his brother, with his twisted leg and nonverbal desires, a chance at a favorite pastime—speed. It’s Hugo’s voice that we hear:

“Yep. Hugo’s here. Now lean your choice, man, a left—this way, or a right—down there.” Ben sat perfectly still, trying to process the instructions, and Hugo took another blessed moment to breathe. Air moved through his lungs thick and warm as blood. The kudzu-swallowed trees added an iridescent sheen to the hazy sky. And the continued cicada sawing, a southern city’s jungle pulse. Shickkaw, shickkaw, shickkaw…. Hugo drew another deep breath; shicckaws ricocheted in his head. Sometimes he thought he could live like this, live with Ben forever. Sometimes he felt that he had already drowned.

Justicz writes with precision and authority. She knows chromosomes, Shakespeare, medicine, the rules of group homes, the bewilderment of unanswerable questions, such as: “Could a child ever ask too much of his parents? And if he did, what should a parent ask in return? That the child go away?” She also understands that real people cannot live without hope—and that readers are real people. There are infinite difficulties in Degrees of Difficulty. But there is also the glisten of redemption. We read across all that time and all those pages to discover (with gratitude) just what that glisten is.

is the award-winning author of nearly thirty books, an award-winning teacher at the University of Pennsylvania, the author of numerous essays, and the co-founder of Juncture Workshops. Her newest book is a collaboration with her artist husband—an illustrated journal called Journey: A Traveler’s Notes. More at bethkephartbooks.com.