Like blind men feeling for pictures Anna and Chloe had felt for differences in their matching faces. Eyes closed Anna could feel the little kink in the bridge of Chloe’s nose, a dimple when she smiled that she could not duplicate and lips that curved higher into a pert cupids bow. Eyes open they were identical but eyes shut they knew every variation.

As children they had played their game of reflection as if an act of praise. Hours spent mirroring each other under the plastic garden table. Capturing each other’s grins, grimaces before turning to hands that mimicked and mocked each other. Two sets that touched fingertips before twisting and turning into other shapes, one hand trying to keep up with the other; hands that turned into white knuckled fists before springing back to open up into flowers petals. The fingers stretched back, palms cupped, only for the other to respond with finger tips that suddenly snapped against thumbs, turning into hungry crocodile mouths. And snap, snap they’d go with their crocodile hands at the people who tried to tell them apart.

It was a cruel turn of fate that separated the two then. Left Anna adrift, separate and for the first time unique. Unique is what her husband had called her at the wedding. Little did he know her desire to be one of two. To have her sister once more, sit under the plastic garden table with her. Quietly then, did she retreat into the family bathroom at night and play their old game in the bathroom mirror. Snap, snap, snap her hands went at their reflection. 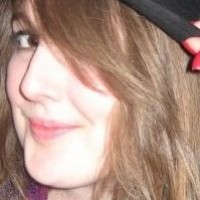 Amber Lee Dodd  is a dual-national writer who resides in England. She studied scriptwriting and performance at the University of East Anglia, where she was funded to showcase new writing at the Edinburgh Fringe. She returned to the Edinburgh Fringe with her work performed in the sold-out show Body Gossip. Her writing has been showcased in Litro and RiverLit. She is currently a playwright for the young playwrights programme at Chichester Festival Theatre and has work published in the short story collection Bookfest 2012: Writers to Watch. She writes the serialized blogteawithgrandma.co.uk.