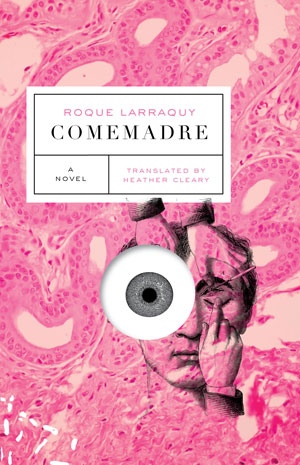 There is a plant “whose sap produces […] microscopic animal larvae” that can consume rats “from the inside out.” It can only be found on “Thompson Island, a small landmass in Tierra Del Fuego,” within Argentinian screenwriter Roque Larraquy’s debut novel Comemadre—the name of this plant of spontaneous generation. Translated in the novel as “motherseeker or mothersicken,” this fictitious plant and its larvae symbolize the dual powers of violence to create and destroy. First as crime, then as art. It is an unmistakably self-conscious symbol for an unrepentantly self-conscious novel, going so far as to have the artist-narrator of the second part dissecting a biographer’s write-up of him and his legacy. Thankfully this consciousness doesn’t eat the novel from the inside out. However, the primary issue of the novel is precisely the necessarily maximalist philosophy this consciousness requires for its slim 129 pages. By the time the comemadre plant has been introduced on page 74, it becomes just another symbol in a long chain of symbols as opposed to the centralizing (and titular) symbol it intends to be.

The comemadre is even introduced as “a botanical digression.” A digression from what, you may wonder? By this point, the initial narrator, Quintana, a doctor at Temperly Sanatorium in 1907 Buenos Aires, has already dragged the reader through a minefield of concepts. First, he ogles the head nurse, Menendez, who, he says, “fits entirely into the space of those words.” Her existence is reduced to the textual and external. Menendez, instead of being pregnant with meaning, becomes a pregnant pause, the ellipses of her identity-concealing occupation. Then a coworker and rival for Menendez’s attention, Papini, tells a layered joke about a “‘fellow [killing] his wife because she wouldn’t tell him what she was doing on the bidet’” in order to explain phrenology. This is followed by a demonstration by the head doctor:

Next to [the duck] is a wooden box of average size. Its lid, which opens down the middle, has a large, round aperture at its center, bordered by the word ergo. Under the lid is a blade that shoots out horizontally with the speed and force of a crossbow. On the sides of the box, next to the reliefs of Louis XVI and Marie Antoinette, are the words cogito and sum, respectively.

The head doctor decapitates the duck, its head “[remaining] on the ergo,” while “it looks at us. Or thinks the thoughts of a duck.” This demonstration is followed by a report from an eighteenth-century doctor who recorded a similar event in humans at the guillotine. It’s at this point, fourteen pages in, that we arrive at the guiding story of Comemadre: Can the doctors of Temperley Sanatorium convince patients to be guillotined and then get them to talk about the afterlife? In other words, unlike these preceding moments of textual and external understanding, can the doctors transcend exteriority?

Probably not, as several images later (including a fake serum, tin frogs, and circling ants) Quintana’s story concludes with his visceral and violent act of propagation upon Menendez; Quintana, in pursuit of transcendence, makes a mother of her, becoming the motherseeker eating her from the inside out. The savagery of this (pro)creative act is reduced in the second part, taking place in 2009. Here, all that remains of Quintana is his journal, which becomes the inspiration for a final art piece for the artist-narrator and his partner, Quintana’s great-grandson. To be frank, the problem this poses is too great for the novel to overcome: the holistic feeling of Quintana’s story, as troubled as it is by abundance, is broken apart in the section of the novel that reads like an extended afterword. Over-comprehensive is the word. There is too much weighing on Quintana’s story to recontextualize and revitalize it effectively. On its own, in fact, Quintana’s story would have been complicatedly interesting. It resembles Ernesto Sabato’s 1948 Argentinean classic The Tunnel, another story of obsession and the possibility of transcendence. A refreshing, Modernist turn.

As it is, however, Comemadre is not a bad debut in the slightest. Roque Larraquy is a strong monologist. One of the most memorable moments being the previously mentioned explanation of phrenological characters via a man’s curiosity about what his wife does with a bidet. The second part, insomuch as it is an extended monologue, hits the right notes for a narrator-artist with such memorable lines as “I think, no one likes a child prodigy in a Dior vest.” And while his characters often border on tropes—Doctor Papini is a familiar figure as the big idea, all bravado comic relief—there does remain an air of mystery about Quintana’s motives. At times indifferent as Mersault in Albert Camus’ The Stranger, at times as technically cruel as the Nazi doctor Mengele. A concentration camp survivor once said that “I have never accepted that Mengele believed he was doing serious medical work […] He was exercising power.” This would be a fitting description of Quintana. Strikingly, Josef Mengele fled to Buenos Aires after World War II.

And as for the translation by Heather Cleary, it is hard to imagine Comemadre functioning as effectively as it does without her. Much like her work on Sergio Chejfec’s The Dark, she brings clarity to writing that is dense and overflowing.

And as for the translation by Heather Cleary, it is hard to imagine Comemadre functioning as effectively as it does without her. Much like her work on Sergio Chejfec’s The Dark, she brings clarity to writing that is dense and overflowing. While these two projects are markedly different—Chejfec’s writing is mazy, Larraquy’s is layered—they both require a translator that can parse their complications. What rough edges exist in this novel are inherent to the novel. Quintana, observing the doctors of the Sanatorium applauding their American benefactor for proposing to head nurse Menendez, notes that she is “condensed, made material; she adopts her decisive form.” This would be an accurate description of Cleary’s contribution to the novel as well.

At the end of the description of the guillotine box for the Cartesian duck it follows: “the phrase and figures clearly bear allegorical weight, which diminishes the charm of the whole.” A more fully formed reflection on Comemadre doesn’t exist. Just as the comemadre larvae spontaneously generate in the plant’s sap, symbols seem to spontaneously generate in the leaves of the book. The larvae themselves are stored in a black powder that is described by the artist-narrator of the second part as having “an irregular texture.” Comemadre has an irregular texture. It wants to mean too much, so much that it inserts addendums to inform you of its intent. Perhaps Archibald Macleish’s final words in “Ars Poetica” are overstated. But when I read almost wonderful novels like this one I’m still reminded of them: “A poem should not mean/but be.” 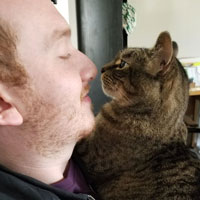 Justin Goodman earned his B.A. in Literature from SUNY Purchase. His writing–published, among other places, in Cleaver Magazine, TwoCities Review, and Prairie Schooner–is accessible from justindgoodman.com. His chapbook, The True Final Apocalypse, is forthcoming from Local Gems.