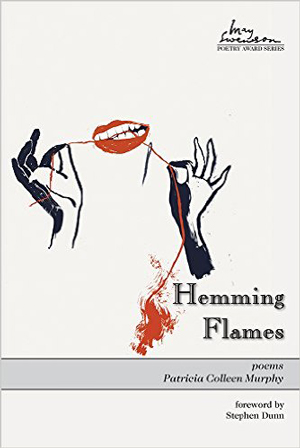 On the peripheries of almost constant domestic emergency and conflict, Patricia Colleen Murphy’s poetry collection Hemming Flames lights up disaster and familial antipathy with humor and endurance. Many of the pieces in this collection share threads of the same story, featuring reoccurring family figures and familiar, though often growing, conflicts. There is an undeniable amount of devastation and trauma inside these family stories, but Murphy’s true skill lies not in showing what’s often the obvious and expected pain of it all, but in bringing a humor and an odd sense of the mundane to seemingly shocking moments.

In the collection’s opening poem “Losing Our Milk Teeth,” the speaker details how their father “will be all/ smiles. He’ll say pass the mother/ fucking peas.” These lines are at once foreboding and strangely funny; in a scene where the mother is not wholly present, a request for her return is tucked into an expressed desire for peas, all barbed with an impatience and anger which suggests familiarity coexisting with aggression.

As in the opening poem of Hemming Flames, many of the poems to follow also tackle emotions which are usually considered antitheses of one another but, as Murphy is able to prove, can be found sleeping side by side within the familial and familiar. In a piece near the conclusion of the collection entitled “Rank Bitch,” Murphy’s persona explains:

We are destined to grow old with the things that frighten us.
You are not a threat to me, except that you will die.
You, the dog who stares at my finger even when I point to the bone.

Here, what is close and what is loved is shown to be dangerous in its capacity for both affection and death. Each of these lines end on themselves— closed sentences that structurally operate as self-contained units. However, while the sentences terminate at the line breaks, the love and fear carry through, threading across these separate declarations and tying them together with the sensation of fearing something because you love it or it loves you. These sentences are clean and simple, nearly prosaic, but the poetry of them bleeds through in how they relate to one another. As if in their own family, these lines communicate with one another on a shared ache and desire. The anxiety and affection, the hovering grief and the inability to abandon what will bring it, these things, in Murphy’s work, are not only not antitheses, but in fact prove themselves to be codependents.

Much in the same way that family is Murphy’s subject for both love and grief, it also becomes the context in which her persona struggles to find and understand their own individuality. In “Kitten” this fracturing of self within family is seen in how each family member “drove separate cars to the probate court” to see their collective mother. The self is something salvaged in opposition to the gathering, performed in the taking of separate vehicles to the same place to see the same person. But, inevitably, these cars are either doomed or graced to stop in the same parking lot, arguably rendering this attempt at disassociation futile. Murphy shows us that the possession of the self in isolation can only be feigned so long when family is the destination.

Despite how the pieces which compose Hemming Flames are regularly foregrounded by shocking emergency, they do not stay isolated to communicating awe or astonishment alone. Murphy is clever with her use of trauma as she is with her implementation of humor. She provides her readers not only with the emergency, but also with its place in the everyday. For instance, in “Cutlass Ciera” the persona works backwards from “that burning/ Oldsmobile” and “the skin grafts” detailed to declare “I bet that day started with a sunrise./ I bet that day stared with you opening your eyes.” providing the reader with something both obvious and necessary, that being the understanding that emergency is only emergency in the context of some breed of normality and ease. What then becomes more alarming than a car fire or commitment to an asylum is how a repeated emergency can become the new normal. Murphy’s mastery of the alarming arises in how it’s able to be slowly transformed throughout the collection into something nearly blasé. 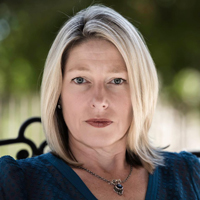 In the piece “Arch on a Rung,” Murphy’s speaker communicates: “I’m as bored of mom’s suicides/ as she is of my attacks.” showing us the place where, because of their frequency, familiarity, and imbedded status in family, specific emergencies have become dull and expected. As if they were other members of this family, attempted suicides, attacks, outbursts, and acts of self-harm are not only no longer alarming, but are in fact made room for within these relationships. The speaker in this poem is not unconscious of this transformation and, in fact feels that they “ought to be ashamed” but instead manages to “take one step,/ lowering myself down the ladder she left me.” This piece, and the collection as a whole, compellingly navigates the somewhat surreal and dislocated space born when emergency becomes expected and family becomes both a refuge and a danger.

Patricia Colleen Murphy’s Hemming Flames is lit with tragedy and fear but runs on endurance and daring moments of tenderness and care. Murphy writes and composes at the level of the line and demonstrates an acute awareness of the relationships present between her words, stanzas, and poems. The collection as a whole serves to slowly draw out a portrait of a family and a portrait of the individuals surviving within it. It is a difficult book in its content, but also a potently engrossing one which, I believe, does important work in asking and answering what is to be done with trauma and the unfixable.