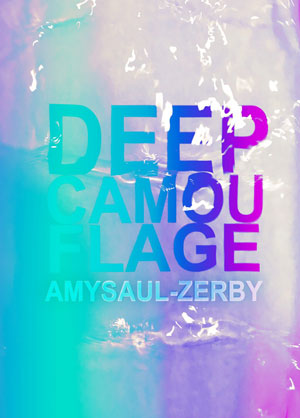 Amy Saul-Zerby’s new collection, Deep Camouflage is the manifestation of heartbreak. It is the fables that spawn from moments of empathy and melancholy. It is the conversation that a poet has with their reader. More than most poetry collections, Saul-Zerby’s is a sequence that asks to be read all at once. These poems flow so smoothly into one another that it eventually became difficult for me to distinguish them as separate poems. Each moment felt so interconnected with those around it that what I was reading became one larger work, occupying that transitory space where heartbreak lives.

These poems flow so smoothly into one another that it eventually became difficult for me to distinguish them as separate poems. Each moment felt so interconnected with those around it that what I was reading became one larger work, occupying that transitory space where heartbreak lives.

Reading Saul-Zerby’s poems, I kept thinking about the myth of Medusa. Not because it’s ever mentioned in the book, or because the book is meant to read as a retelling. I thought initially that this connection was the result of something that I’d read recently that I must have forgotten, that it was already bouncing around inside my head. Now, I think that there may be a more interesting connection between these two narratives, and that Deep Camouflage might act as a kind of subversive variation of the original myth. Now, the label of Medusa carries with it some inherent assumptions. I do not want to use this title as it relates to physical appearance, but rather as it applies to circumstance. Medusa is the woman cursed by the gods, whose fate was forced upon her. She is the victim of men who hurt her for the sake of their own self-indulgence and then blame her for what they’ve done. They cut off her head and take it home as a trophy. In this sequence, we see a progression in the outside perception of the character going from victim to monster. Medusa is the ‘sacrificial woman’ or the woman who has been turned into an object and stripped of her humanity. Deep Camouflage (at least to my knowledge) has no intentions of connecting itself to Medusa, or the Perseid, but regardless of this, we might use Medusa as a means of understanding the way that Saul-Zerby refuses this stereotypical role of the ‘sacrificial woman’ and how she instead attempts to reverse this progression and create an independent and powerful new image.

These poems are about love and trauma. The aftermath of failed or lost romance. The ways that someone we used to love can take a part of us with them on their way out. In Deep Camouflage, the body is something that we occupy. It’s a container for the self, being, existence (the existent). Trauma is when pain penetrates this shell and ricochets around the inside. Saul-Zerby takes the time to form this distinction between the container and what it contains. And does so because this book wants you to see the difference between what you are and what you project. These poems are full of pain, but at times, this pain comes because it is asked for. “rip me open like you do” and this isn’t because the poems are a woman who deserves to hurt or a woman who owes herself to someone else. This is a pain of obligation. It is Medusa lowering her head so that Perseus can remove it more easily. These poems are what leaks out of the neck of the severed head: the insides when they evacuate the shell. Conversations and thoughts exposed to the open air.

None of this is to say that Saul-Zerby is playing into the stereotypes of the ‘passive woman.’ This book refuses to form itself around the gendered demands that come with heartbreak. It refuses to be anything other than itself. Deep Camouflage is not a poetry collection about forgiveness or reunion. Instead, it embodies this refusal to give up parts of ourself for the sake of others, out of some archaic obligation. As if Medusa has taken the head, severed from her body, and cradled it in her arms. What is lost is lost, but it is not handed over to someone else. Perseus does not get to turn Medusa into an object. She sews it back onto her body and bears this universal longing and loss. She does not let her exes take these important parts of her. This is embodied in poems like “anthem” where the poet says, “ask not what you / can do for / your country // ask what you / can do for me.” Saul-Zerby shrugs off these expectations, she refuses to be an empty vessel, a discarded object. She sews the head back onto her body, and tells us that she will not give herself over to the gendered expectations of heartbreak.

This is a collection for anyone in search of new poetry. Deep Camouflage is accessible yet intimate. It’s a collection for those suffering from heartbreak, or those looking for something beautiful to read. Saul-Zerby’s poems read like memories and thoughts, pouring directly from the mind into the mouth. They feel genuine and unfiltered.

Deep Camouflage is a contemporary collection, full of beautiful and incredibly honest language. Although I might see these connections with the past, these poems could not exist in another time. They are deeply rooted in the modern melancholy, that feeling of loneliness that exists in the city. Where an apartment is infinitely far away from any kind of human contact. Saul-Zerby has a complex understanding of these emotions that we’re not always able to vocalize or describe. This is a collection for anyone in search of new poetry. Deep Camouflage is accessible yet intimate. It’s a collection for those suffering from heartbreak, or those looking for something beautiful to read. Saul-Zerby’s poems read like memories and thoughts, pouring directly from the mind into the mouth. They feel genuine and unfiltered. Deep Camouflage is an impressive second book by a talented poet. 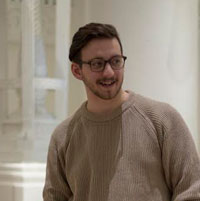 Mike Corrao is a writer working out of Minneapolis. His work has been featured in publications such as Entropy, Cleaver, decomP, and Fanzine. Read his story Beat Boy in Issue 16 of Cleaver. His first novel will be released in fall of 2018 by Orson’s Publishing. Further information at www.mikecorrao.com.