The family was crowded around the small white gazebo in the middle of the yard. There was a map, too, pasted on the corkboard floating high on the gazebo’s walls, confining the chaotic compound in abstract squares and rectangles.

Ruth didn’t touch the peanut brittle, the haphazard compensation present from her middle child, the feminist from Philadelphia, who’d brought her two kids. The conversation was a facsimile of previous email exchanges that she’d intercepted from her late husband’s computer, carrying the buzzwords of a telltale worrywart: college search, apnea, bullying. Whenever Ruth tried to make her way in and say the words she wanted so desperately for them to hear—state’s coming to get me. I don’t belong here, Russ is having an affair—they all looked away, like she was some kind of contagion that would spoil their perfectly planned afternoon.

And then she stared at the tin box with its pastel Victorian design, remembering the gray barn. She wanted to open it, everyone could tell. Her fingers trembled and then returned to her sides, where they dangled limply over the top of her sweater. Pea green, just like old Mama had worn, before Papa took out the Colt and watched the medulla splatter all over the ugly rooster wallpaper. Learn to forget.

There was nothing romantic about a deficiency of acetylcholine, yet Menia Memory Care seemed to think so. The facility’s neat little white huts were adorned with wreaths to reflect the incoming seasons: pastels for Easter, cornhusks for autumn, wilted Arizona Poinsettia for the dismal Christmas holiday. Pinned to the front wall was a crowded list of tedious rituals christened with new and exciting names, like Pet Therapy, which entailed stroking an aging golden retriever whose slobber was somehow more charming than the stark Phoenix landscape; Painting Memories, where the disengaged residents drew streaks of gray that eventually formed barns and farms of their youths and faces without names. Or the kiss of death, the dreaded Pie Social, the reprisal of the family dinners people only attended out of compulsion. Today that kiss of death would plant a peck on Ruth’s cheek, and she could already feel her resentful adolescent grandchildren crossing their cutoff jeans-legs bitterly, and impoverished artist children doling out advice about finances, and shrieking babies who would muddy their tracksuits in the grass. And none of them would ever touch the strawberry pie sitting lonely at the table in the middle of the gazebo.

Depression-era kids, the caretakers would mumble with a sigh as they spooned up spilled blueberry filling from the plastic tablecloth. They learn to never forget, to keep what they have, to use it all up before it’s gone.
Image credit: Justin Marty on Flickr 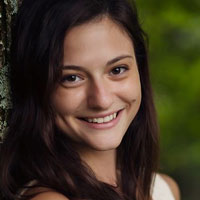 Catherine Mosier-Mills is a senior at Radnor High School. In her spare time, she plays piano, edits the school paper, and leads the Model United Nations team. Her work has been published in Apiary and Philadelphia Stories Junior, and recognized in the 2013 Scholastic Art and Writing Awards. She was recently named a 2014 National YoungArts Foundation Finalist in Fiction.