Within moments of its bare opening, I already liked Cartoon College. When I reached chapter three of the documentary—which dubbed comics “better than sandwiches”—I knew that I loved it.

Josh Melrod and Tara Wray keep the first shot simple: the camera shows a man’s back as he rummages through old drawings. We are not coddled by music meant to make us feel happy-go-lucky or sentimental. This meditative simplicity populates the entire film, allowing viewers what feels like a filmic rarity: the ability to listen to a human voice with only that voice for guidance.

Throughout Cartoon College, the camera acts as a casual friend rather than a self-conscious machine. It visits the Center for Cartoon Studies in White River Junction, Vermont, along with all of its classroom discussions, brainstorming meetings, and honest confessionals—from both comics greats and students alike. Charles Burns admits to drawing pictures to ward off bullies just as a young MFA candidate discusses being dismissed by his hometown for his career choice. Lynda Barry reveals that she makes most of her money on Ebay while students ponder how comics might be able to provide them with a living.

This democratizing of artists—bringing them all in front of the same, simple camera, whether published, self-published, or not at all—makes Cartoon College accessible to everyone. You do not need to be immersed in this world to watch this film. Consider it a boot camp: the same name that students at the Center for Cartoon Studies use for their first year in the program.  Newcomers to comics will learn a substantial amount about the industry and the grit needed to succeed in it—all in a swift seventy-six minutes. And comics veterans will hear from an impressive roster of artists, likely to swoon as famous faces pop up on screen. Like the quaint town of White River Junction itself, Cartoon College is homey—and yes, it is the kind of place where immensely talented individuals dub comics “better than sandwiches.” 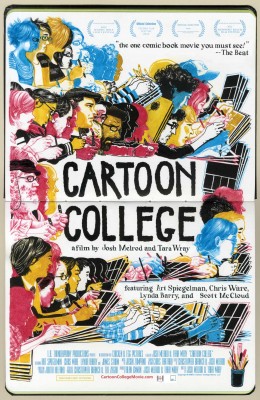 If I had to change anything about Cartoon College, it might be its name. When I finished the documentary, it seemed I had watched a beautifully composed collage as much as I had watched a depiction of a contemporary college. One featured artist composed a memoir about the Latter Day Saints. A young woman committed herself to a series on the trials and tribulations of menstruation. We meet a character called “Muscle Duck.” In this subtle, character-driven style, Cartoon College undermines the misconception that all cartoonists are nerdy men. These are women, men, young people, older people, interesting people. These are individuals eager to share their stories with the world. And I can’t wait to read them.