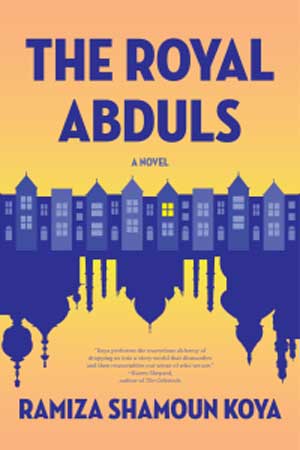 Where do we belong, and to whom? Are we most ourselves when we are by ourselves, or are we most free when rooted deep inside family responsibility?

During the day and a half that I ravenously read Ramiza Shamoun Koya’s debut novel, The Royal Abduls, I asked myself these questions. I leaned into the lives of Koya’s magnificently drawn characters, into the nest of troubles they inadvertently twigged together, into the love they did not know how to express. Or forgot to express. Or ran out of time to express.

The Royal Abduls is a family story about an Indian-American boy named Omar, his parents, his aunt, his grandparents, and his friends. Every character here is reckoning with a post 9/11 world and its overt and unarticulated prejudices. Omar, who is eleven when we meet him, has recently adopted an Indian accent and is researching (and fantastically embroidering) a family history no one has actively passed down. His aunt, the persuasively particular evolutionary biologist Amina, has just moved to DC, Omar’s hometown, to join a toxic research lab. Omar hopes his aunt will help decode the mysteries of his family’s past and immediate present. At the very least, perhaps she’ll transport him to a local cricket game and yell spontaneous insults with him at the opposing team. After all, Amina has just left a long-term boyfriend who had hoped she’d settle down with him, and Omar is the closest thing to a son Amina will ever have, and so there should be privileges. 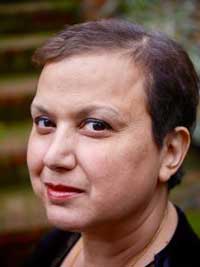 With clear but never plain language, Koya allows her story to unfold—Omar’s troubles at home, Omar’s troubles at school, Amina’s challenges at the lab and challenges as the aunt she tries so hard to be. Spectacularly plausible but original, well-paced but sensuous, Koya’s plot thickens with events Amina cannot control. Omar’s plight as a young boy judged by the color of his skin and the lonely desperation of his fantasies is deeply moving. Amina, like most of us, does not have answers for the questions that he asks:

She searched her mind for the words that could soothe the hunger in his heart and the fear in hers. She understood his ache for reassurance that their family, history, the world made sense. But all she could think to tell him was that he should find a way to escape into an inner world, to fiercely guard his solitude. Because there were no guarantees, and there were always people who were disappointing and cruel, and you could go your whole life searching but never find a place where you belonged. But she couldn’t say that, not to an eleven-year-old.

Amina loves but she’s always running. She admires commitments she can’t make. She endlessly judges herself, asking herself (and so asking us) whether our passions have as much value as our actions:

Did studying insects count for anything in such a world? She doubted it and yet she had no choice; this was what she loved to do, it absorbed her. She had fought for this career, and she didn’t want it cheapened by the fact that she was a passive bystander in a world that demanded impassioned activism. If she were a better person, she would be protesting and supporting legal action and spending her money on campaigns. Or fighting for the freedom of women, Muslim  women like her mother’s mother and sisters and cousins, in Afghanistan or Saudi Arabia or Nigeria…. But instead she would go to the Himalayas to stalk wild things and pray not to be disturbed.

Don’t read The Royal Abduls if you are hungry; scene after scene steams with a dish, a scent, a meal. Don’t read it if you prefer the kind of stories whose endings you can easily predict; the ending of this story aches and it is earned.

Do read The Royal Abduls if you are searching for hope in a complicated world—not every day hope, not the Hollywood version, but the kind that honors the nearly irresolvable dualities of ourselves. We’ll never have everything we want because we’ll never know just what we want. We’ll never be who we want to be, because our changeable world keeps reconfiguring our options. What we can do, Koya suggests, is stop protecting ourselves from love, on the one hand, and stop hoping that love won’t be messy, on the other. Because love is messy. Love is a question we can never perfectly answer.