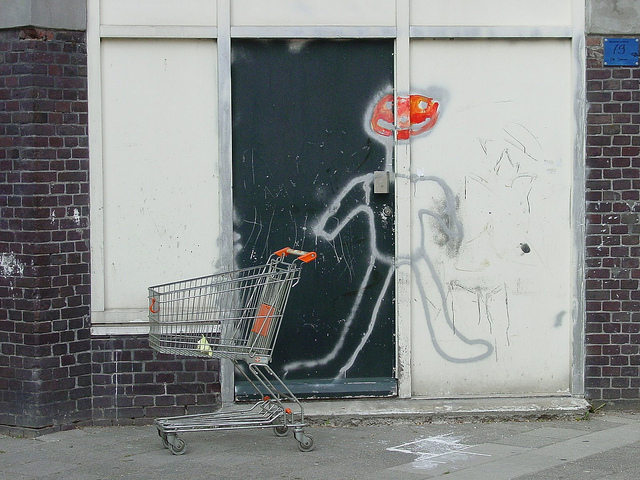 A beautiful mother crossed in front of my carriage, pursuing a chatty little girl up the cereal aisle. Familiarity and dread washed over me. Thirty years ago I’d talked to her almost nightly on the phone. The dread accompanied a swelling lack of clarity about why she’d disappeared. Aging in your hometown, if you’d disrespected innocence, could be hazardous.

I had been drifting toward the section for dented items beside the deli, but not to save a buck on a mangled can of green beans. Once the sell-by date comes up, fresh bakery goods, reduced to half-price, end up there. Poof! Natural expiration becomes illusion. Sub rolls and Scali bread get picked over fast, so you have to be aggressive. Sometimes I’ll even a do a little civilized hand bumping with a rich old woman from the East Side.

No one was there to fight. I sacrificed easy pickings for Carla when I called out her name. She stopped. I had to identify myself. Maybe she hadn’t forgiven. Maybe time had ravaged me. After a fleeting, terrible expression of blankness, she gave me a sincere hug, but it was slack, bland. I felt insubstantial. I said I’d quit drinking. Over twenty years ago I’d called her a whore. She wasn’t. I was a drunk. Now we made small talk about employment, dead and sick parents, her husband. We didn’t say: once you mattered; you felt necessary; you were not a diversion on the way to real. Carla pushed her cart after the laughing, spontaneous girl. What you love gets away so quickly. I followed. One of us started the goodbyes. I turned around.

Carla had written on the back of the striking, wallet-sized graduation photo she’d given me that I could always count on her for a talk. We drank together then, at parties, for a while—until she was gone. Everyone dispersed to colleges, careers, new families. I went to bars after work I hated. Strangers were loud, laughing, and relentless. Carla appeared in an Irish place with a man, greeted me, sat away from me. Other men approached her. I watched from the bar, drinking, stewing over always. I was separated, dismissed. I got angry. I found myself at her table, yelling at her as her old beauty somehow went rancid. A coworker dragged me outside. Carla tried to follow, shocked but unafraid. She kept faith in me. I felt as if I’d been possessed.

Back at the reduced food, nothing decent was left. I took a number at the deli. A crowd had developed, immersed in examining and selecting slabs of meat. I hadn’t told Carla that I’d gotten courageous enough to leave. For three years I was gone, but couldn’t stand it. If you can’t kill your own food, claim your own land, you’re stuck inside the same traps, sober or high. I needed familiar limits, geography and stores I could sleepwalk through. But they became alien. I felt alien.

Reacquainted lovers in movies never seem worn, even if they’ve sinned. Rugged Bogart in his white tux, passionate Bergman and her unfathomable eyes, long after Paris, looked the same in Hollywood’s collapsible Morocco. The passing of real years had only dignified Carla’s radiating, soft attraction, but I was too thin, weary in the eyes. I was nothing anyone would be glad to meet again. My energy was gone; shame wasn’t. And friends, fused by more than superficial beauty, needed energy more than lovers. Things could secretly spoil underneath the skin. You were lucky to be warned by a panicked, malicious insult.

Dispirited and detached among more strangers, I felt my mouth water from the scent of the rotisserie chickens cooking nearby. A tank of lobsters was beside me. A laughing boy, too young for a complex heart, poked at the glass as mortified crustaceans crawled all over each other. After bars closed, I’d almost always say to a drinking buddy: Let’s go to Canada. Canada was heaven on earth. I never went. I knew I really wanted to go back in time, not north.

Five more numbers—then I could run away again, for about four days, until my organic bananas turned black. I’d already forgotten Carla’s kid’s name. I strained with a weird desperation to retain her electric bearing. All I got were fresh outlines and familiar ash. Maybe magic could turn them into more. 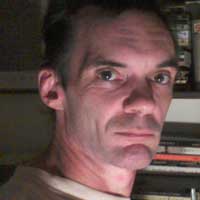 John E. Keats’ essays and stories have appeared in Midway Journal, Extract(s), Under the Sun, River Teeth, Relief, and Roux. He has an M.A. in English from Boston College. He lives in Massachusetts, reads a lot, and tweets a little @JohnEKeats.