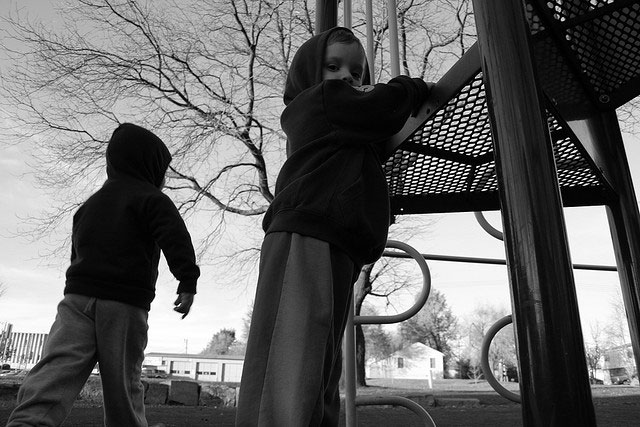 I broke my brother’s collarbone when he was three and I was seven. We were playing on a playground set in our backyard at the end of a fall day. The set was made of plastic: a short plastic platform set atop a short plastic slide, fit more for his age than mine. What I remember is this: the long shadows of an early fall evening, mild boredom, my brother’s strange self-indulgence; an upwelling of impatience, the boiling up of frustration—then the idea to pick up and raise the slide while he stood on the very top of it. Which I did. I didn’t give it much thought. He fell over like those fainting sheep, shoulder-first, stiffened by shock, and screamed and writhed in the cold grass as I stood over him. I turned him over, saw his face a jumble of red and tears, his glasses broken. I told him to stop pretending. He went to the ER and came home with a sling.

As a child, my brother was skinny and wiry and had a sort of mystifying buoyancy. He wore half-inch thick glasses, forever Scotch-taped at the corners and the bridge, one of the lenses patched over to correct his lazy eye. His hair, a coffee-colored mop-top of tangles and knots occasioned by a piece of chewing gum or leaves or paint, resembled a mushroom cap, gills and all. He was an odd child; imaginative, self-abandoned. He ate whole sticks of butter from the refrigerator. He removed pots and pans from the cabinets to play drums on the kitchen floor and chanted along to his arrhythmic beating in a throaty gibberish. He dressed up as Santa Claus on May afternoons and waved at buses of bewildered schoolchildren. He dressed up as: a leprechaun, Shirley Temple, a Bedouin tribesman, Jesus, an Irish Republican militant. He did this in our front yard. In first grade, he brought our cousin Lauren in for show-and-tell. We have it on video. He was an odd child.

I was not. I worked hard to fit in. Or maybe I was as eccentric as he was, but I wouldn’t dare show it. I felt constrained by some mysterious boyhood force. I was self-conscious, prone to shame, scared to death of going to a catechism-inspired hell. I sought order, a place for the chaos of childhood to fit. I think I was, at times, a bizarrely serious kid. My teachers commented on my conscientiousness and maturity, and I handed those notes, proud, to my parents. There’s a strange quality of recognition I have with my seven-year-old self, as if a part of adulthood had already been fit into place. That consciousness feels the same.

But at seven, I also took seriously my fraternal role, which meant I instigated fights with my brother, the youngest, to pass on the brute force lessons taught to me by our older sister. I designed our fights to keep my brother out of trouble. The specter of a bully (menacing teenagers) was the force I hoped to train him against, and under this dubious cover I made him fight me. He resolved to walk away until I provoked him enough, until it was unavoidable. These fights, which cast our entire childhood in a quality close to myth, are the only times in my life I remember being genuinely cruel to someone else.

My mom doesn’t believe I was the one who broke his collarbone on that fall day, twenty-five years ago now. My brother doesn’t believe it either, though he admits he doesn’t remember it at all. He was prone to injury (he would later ride tricycles into brick walls and tumble willingly down stairways) and, for my mom, he just fell. She laughs, thinking of the mop of hair, of Santa Claus in May. “He marched to the beat of a different drummer,” she says. He’s twenty-eight now, a successful songwriter and musician. We’re close, though we live 1,200 miles apart.

“That’s all ridiculous,” she says. “He was two, not three, and it happened in the summertime. We didn’t know he was seriously hurt until the next day.”

She’s right, but I won’t let it go. The scene in my mind, in the autumn, raising that slide and standing over him afterward, lives on so vividly. This spectral guilt finds form here. I’m surprised it means so much to me.

My mom clears her throat and sighs.

“You were always so hard on yourself,” she says. 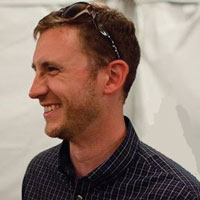 K.C. Wolfe’s essays and short stories have been published in Gulf Coast, The Sun, Prime Number, Joyland, Redivider, Under the Sun, Swink, and other magazines. He serves as the nonfiction editor for the magazine Sweet, and lives, on average, in St. Petersburg, Florida.