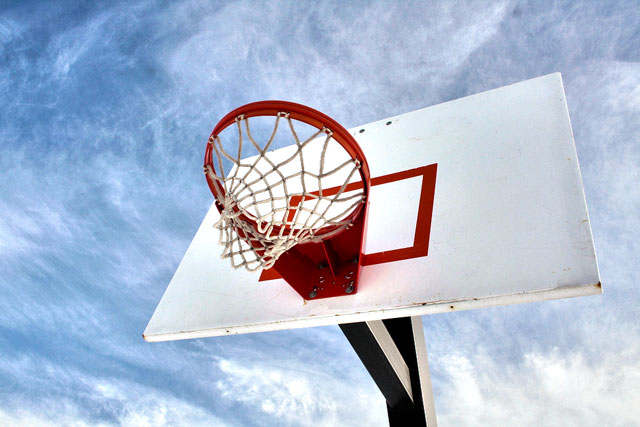 I had the ingredients of becoming a perfect milksop, but it didn’t happen. Every day I carried to school an orange ball bigger than my head, and at lunch watched long-legged teenagers with patchy facial hair and funny white boots borrow the ball to put it through a bent rim. The ball was named after my uncle Wilson. I had found it buried under the yellow flowers of a California pepper tree. My hands itched all day after scrubbing it with laundry detergent, and my feet hurt when I kicked it against my aunt’s garage door.

The young men multiplied faster than tree rabbits. They started as two-on-two, then three-on-three. After a few more days, they played a full court press of five-on-five, hooped back and forth while other children picket-fenced the sidelines, waiting to be picked. Girls perched on top of an aluminum bleacher. They had wavy canary feathers for hair. They hardly paid attention and did not cheer. I sat on the bottom row and absorbed their singsongs without looking at them.

I didn’t speak much.  I was immersed in ESL classes, where Spanish became the lingua franca. That went on for several months before I realized that The Jetsons on television sounded foreign in English. I did well in Spanish and mathematics. Everything else I failed that term.

I don’t remember the exact day, but for hours the sun’s sulfur carbonized our heads. No one really wanted to play except me. Sweat had already covered my body and dripped from my forehead before I even touched the ball. On the court, I flew like a black-billed magpie among white storks, stealing the ball from Michael, dribbling between the legs of David, the tallest stork, lobbing it over Daniel, swish and score. I lost two kilos that day from being in the outdoor incubator, but it didn’t matter—we were the champs.

We queued in front of a fountain to scoop water and splash our body. I stood last. The water hadn’t cooled. We spread our drenched shirts on top of the monkey bars to be dried. They spoke. I listened. “Dis…Dat…Der” were the only words I recognized, plus the familiar biblical names. Thank God for that. I could have been playing with Jehoash, son of Jehoahaz, son of Jehu, and Jeroboan, son of Nebat.

“Let’s see who has the biggest shoes,” David dared. Converse, Adidas, Puma, white leather vamps and black overlays, tongues and ankle straps, lined side by side, heel to heel. They sized me up and laughed. It was a contagious laughter that rippled in a minute-long wave. My shoe wouldn’t have fit David’s toes.

My mother had bought the pair at a Goodwill store one hot summer day when we first moved to my uncle’s house in Los Angeles. I was almost eleven. My father and older brother joined us two years later when my brother completed his compulsory military service. They never saw my shoes. Red and yellow with black wings glued on the side saddles, they were the best shoes I’d ever owned. My mom convinced me that they belonged to Robin, the sidekick to Batman. To make it official, she’d stitched a capital R on the vamp.

I didn’t get to shoot again until weeks later during another heat wave. The storks had transformed into cranes that late fall. My mother attributed it to them eating burgers and fries. “Look at their parents,” she commented one day when she picked me up from school. “They look like tractors. That’s not healthy. Do you want to be like that?” I kept quiet and snuck my first Whopper that week.

David remembered my play and invited me to court. The wings on my Robin shoes were half peeled, flapping like a tiny bat. My toes bulged at the seams. My T-shirt stretched. Our sweat splattered and instantly evaporated. The callus on my toe bled, but was camouflaged by my black polyester socks. We won again.

David ordered another showing of shoes after that game. We lined up as before. The boys laughed again, pointing their fingers at me. They wore the latest Nike, with a red man stretched like a letter X holding a wart. I was not taken by the wave anymore. I pulled away and sat on a field of sallow crabgrass, knees drawn to my chest, arms around them, chin resting on the knees.

Another person immediately leaped from the bleacher and took my spot. Her bleached head reached their chests; her scrawny legs shimmered like the Mediterranean Sea in the morning light. She flashed a pair of glossy sneakers with thick pink laces, and an open-mouth alligator plastered on the sides.

“These are La Coste,” she gushed. The article didn’t match the word, and it was neither Spanish el costo nor French le coût. She probably spoke Latin. The boys shrugged and strolled to the cafeteria. David rolled the ball to me but it curved back into the court. I watched it stop near the free-throw line.

The girl grabbed the ball and sat on it next to me. She removed the letter L from the eyelet and tied it to my lace. It was a dainty white L, made of jute. She spoke rapidly. “My mom’s remodeling the kitchen. I found extra strips of linoleum and carved out the L with an X-Acto knife.” I didn’t grasp any of it. I remained silent.

For the next three months the L drummed off the R with every step. I sprung six inches that winter into a wary black stork, and she became a flaming flamenco. It rained for the first time. My toes poked out and got wet. The R had converted to a P before my mom replaced the shoes with a pair of soccer cleats. They were brand new from K-Mart. The orange ball had tanned like a cherry; the bumps on its leather had faded. I wore the L on a necklace, under my shirt close to my heart, hidden from my mom. 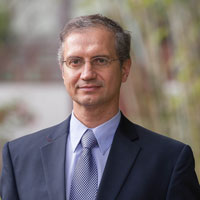 Shmu’el Bashevis Ben’yamin moved to Southern California at the age of ten where he unwittingly learned Spanish before English. It turned out that because of his mother’s Semitic tongue, he knew more Ethiopian than English. During his scientific studies in his twenties, he began to publish arrhythmic poems, under various pen names, in Sparrowgrass Poetry Forum, Poetry.com and Eber & Wein. His short story, When Emily Left, was selected as one of the five finalists of Warren Adler’s Divorce Short Story Contest in March, 2012. He currently resides near Pasadena.