To read Emily Steinberg’s autobiographical visual narrative, Broken Eggs, a set of sixty-seven images accompanied by sprawling text and recounting her struggles with infertility, is to witness a series of concurrent, sometimes even conflicting, emotional transformations. From the first, our narrator appears engaging, intimate, and raw. She sits on the ground, her hands wrapped around her knees and her brow furrowed, delivering a back-story for the whirlwind series of events that follows. [Image #1]  She spent her twenties as an artist [Image #3] and her thirties unsuccessfully looking for love, while other life events—depression, anxiety, her mother’s dementia— got in the way as well. [Image #4]  This is how she finds herself “on the cusp of forty,” [Image #5] just married, trying to have a baby, and suddenly encountering the possibility that what seemed like such an inevitable life course might no longer be a possibility.

Steinberg’s narrator figures prominently throughout almost all of the pages, but particular visual details often shift. In one image, depicting herself undergoing interuterine insemination, her midriff and thighs widen, as though her body is stretching itself to accommodate this  new surreality. [Image #23]  In another image, she draws herself shrinking as she transforms into a rodent: “I became a fertility guinea pig,” [Image #17] the text reads, and the last two words are repeated, like a directionless  echo, in thin capital letters. These serial, shuffling portrayals are at times accompanied by smudges of color: some mark a short-lived, fiery optimism, while others more ominously seem to cage the narrator in the space of her recollections. Over the course of what seems like an otherwise straightforward, self-explanatory narrative—the text is colloquial and confessional, sprinkled with expletives and interjections—we sink into the story. The sequence of events might sound somewhat familiar—expensive drugs, repeated trips to the doctor’s office, probes, statistics, frowning attendants [Image #37]—but the individual depicted on these pages is dynamic, a substantial and vigorous presence. [Image #46]  Her experience touches us, even transforms us, as we witness her unraveling.

While authentic portrayals of the daily ins and outs of motherhood (from the mother’s point of view) in comics are still somewhat rare—Nicole Chaison’s The Passion of the Hausfrau springs to mind, as do Lauren Weinstein’s online comics and some of Aline Kominsky Crumb’s works—it seems even harder to find honest depictions related to motherhood and loss. Phoebe Potts’s graphic memoir, Good Eggs, addresses, like Steinberg’s, the painful experience of infertility, and Diane Noomin has drawn about her struggles with miscarriages. Nicola Streeten’s Billy, Me & You recounts the death of the author’s two year old son, Billy, and her subsequent attempts to cope with the unimaginable loss. These texts are brave and powerful, in terms of their searing honesty and the way each explores the graphic aesthetic somewhat differently in order to best tell the story. But they are also significant because they actively, and graphically, dispute a culture that favors only particular kinds of depictions—of the satisfaction and ease of family life, of fertility, of positivity in the face of grief and loss, of closure. As Steinberg’s narrative ends, we know the fragile shell of hopefulness and inexperience has been irreparably broken, replaced permanently by a gaping, if artful, exposure. 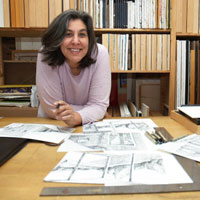 Emily Steinberg, a painter and graphic novelist, earned her BFA and MFA from the University of Pennsylvania and has shown her work widely in New York and Philadelphia. Most recently, she has shown work at SFA Gallery, Frenchtown, NJ and at The Woodmere Museum of Art in Philadelphia. Her graphic novel memoir, Graphic Therapy, can be read online at Smith Magazine. Her short comic, Blogging Towards Oblivion, was included in The Moment (Harper/Collins, 2012). Her illustrated story The Modernist Cabin was published in Cleaver in June 2013. She currently teaches painting, graphic novel, and the History of Comics at Penn State Abington. She lives in Philadelphia with her husband, photographer Paul Rider, and her puppy, Gus. 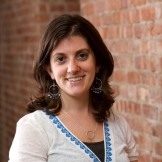