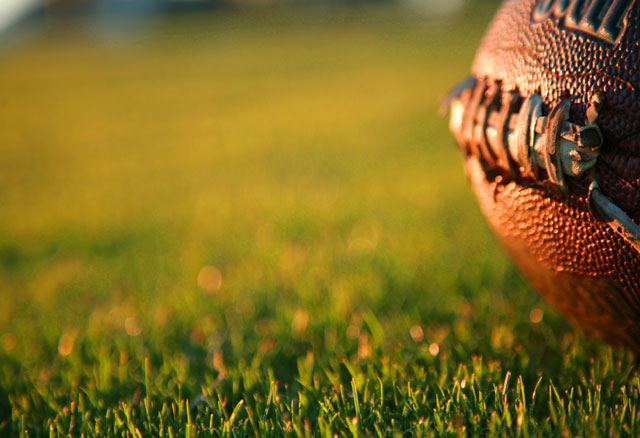 Indian summer a shroud of humidity that hangs in the form of crystalline vapor
over the striped field. Flaming sun falling backside, burning from a ridge of
distant pine. Its ruby trajectory caught in a canvas of heaped-up clouds, firey
arms sweeping the diorama of altocumulous folding and unfolding in the cinematic

light. I survey Nathan’s practice under such brilliance, my helmet-headed son
shirking my exhortations, my words of encouragement met dead-on-arrival
by his hard eyes from the fringe of the huddle. Coach’s whistle again: the snap’s
on two boys on two! Halfback in motion, trotting through a cadence of hard counts

knowing ultimately ( barring disaster of timing, the center’s untimely flinch or transfer
of ball ) the pigskin is meant for him, a play designed to use his gifted speed.
I raise my nose from review, from my sister-in-law’s disturbing texts: ur brother
showing up to Mac’s practices drunk again! Hounding me 4 $, home cooked meals…

all this after I left 18 months ago! Finally the execution coach has been looking for
as the ball exchanges hands three times before crossing the line of scrimmage.
Then her texted follow up: fuk’d in the head… needs ur help! problems with gait
and sleeping limbs. still he continues 2 drink! From the narrow street cars pop and chirp,

security sounded from the sidewalk, from the lime-green grass recently seeded behind
the end zone where a straggle of parents wait in silence. It’s an end-around, the only play
I ever scored on in middle school. I remember the clandestine nature of the huddle,
the nervous apprehension when Danny Webber called “my play.” My first thought

not to score, but not to fail, fumble the ball under coach’s hawking eye. But this boy’s
work seems effortless, a pallid face of ease and determination as he bounds downfield,
switches the tuck of the ball from inside to outside arm as he scoots across the hash
marks, gallops with a strange fluidity. Steel screech, authoritative blasts calling for

an end to the play, an end to practice as a string of boys pat-down congratulations
on his oversized pads. A squadron of geese arrow overhead. The musky scent of fall
rises from the wooded lots. The last dregs of daylight granular on the horizon,
kaleidoscopic, an almost manufactured swirl—topaz and aubergine, apricot and claret,

brassy golds drowning in the sea-green above the boy who scored as he comes
jogging up: Sinatra-eyed poseur, smug kid who has torn the helmet off his sweat-
drenched locks, eyeing me quizzically, approaching my joy-stretched face, maybe
surprised that I’m surprised, that it’s him, my son, who can spirit through the world

like this, feign and cut, slither through a hole before he barrels into daylight. 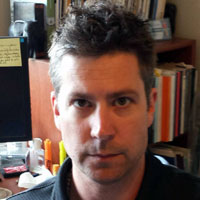 Tony Tracy is the author of two poetry collections: The Christening and Without Notice. His work has recently appeared or is forthcoming in The North American Review, Poetry East, Rattle, Southern Indiana Review, Owen Wister Review, Tar River Poetry as well as various other magazines and journals. He lives in Urbandale, Iowa with his wife and two sons.