You are so far south I keep
looking down at my thumb.
Written on the wrinkled skin
just below the joint
the neon blue veins fan out
flashing the name Utopia.

It’s easy to be distracted
by billboards for yet
another upscale, out-of-town
subdivision. Dressed in
suits of nails and wearing
panama hats, their thumbs live

curled in mansions below
pink palms. Even
in this unsellable story
death is grasped, but think it’s
so far off and south with you,
it would take an extra lifetime

so that I don’t have time
to reconsider. Instead its door
will come knocking.
In the book I’m thumbing through,
I skip a couple of pages
to the longing of birds 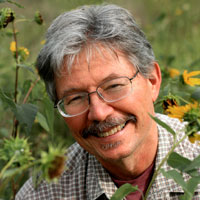 Walter Bargen has published eighteen books of poetry. His most recent books are: Days Like This Are Necessary: New & Selected Poems (2009), Endearing Ruins/Liebenswerte Ruinen (2012), Trouble Behind Glass Doors (2013), Quixotic (2014), and Gone West (2014). He was appointed the first poet laureate of Missouri (2008-2009). Read more at www.walterbargen.com