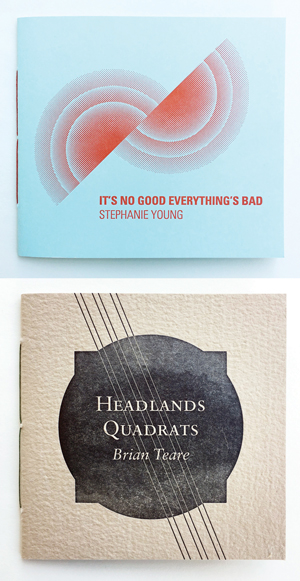 The book announces itself first as texture, almost a feeling before an object. The covers have a soft, pulped paper quality that reminds me a little of egg cartons. They’re in the right color family, too: sandy brown, with a beautifully soft blue-black imprint. The image is one of a circle superimposed on a square, or vice versa; it could be the sounding board of a modernist guitar, with six strings running diagonally across the sound hole. Headlands Quadrats by Brian Teare is another gem of a chapbook out from Doublecross, a Brooklyn-based small press that makes handsewn, letterpressed chapbooks that always feel like considered collaborations between publisher and author.

In this case, the intimate square format of Headlands Quadrats not only reflects the chapbook’s thematics (the quadrat, Teare tells us, “is a unit of measurement used in ecological studies… a square (made of a durable material) placed over a site to aid in the controlled collection of data”), but it also provides a delicate housing—a kind of nest—for the poem inside. The small format prompts the reader to draw the book in closer, so that even the interior voice with which she reads sounds more quietly in her head. Like the book-object itself, the poem is similarly palpable: it unfolds a landscape through the sensorium, from the rattling chapparal and long grass under / foot worn short / burnished bronze / coarse horse hair, to the black / sand tide coats with foam. The poem is precisely tuned, whittled to the essentials, and elaborate in its simplicity.

Headlands Quadrats is one poem, but every page seems somehow also isolate. With three couplets per page, all with lines of roughly even length, each page houses a square within a square. The shape reminds me of a room, which is of course another name for stanza. This remarkably regular structure lends an atmosphere of stability to the stanza-pages. It is a staid form, processional in its repetition, melancholic at the edges. (The poem is dedicated to the late poet, Joanne Kyger.) But inside the regularity of form, the lines come alive, pulled taut and vibrating like guitar strings—sounding out through and against their restraint, their music an effect of coordinated tensions. 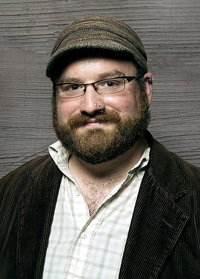 In fact, formal control, and the elegiac note that resonates through the poem, function as musical counterpoint to the more ebullient melody that dominates Headlands Quadrats. Ultimately, this poem is one that wants to take its reader by the hand, like a friend excited to share something strange, wild, and breathtaking. It turns out Headlands Quadrats wants to take us to the beach, past the decommissioned fort / past the former nike missile site / … / [to] the ocean… following a trail whose last ten feet / crumble & run to sand… The poem pulls us along through rough landscapes, across sheer ridges, past smoke and fire, and into lines like these, which positively crackle: downhill into extravagant / thistle from which a doe / startles…

And yet, there is still a muted, miniaturist quality to the poem. Coming again to the compact, square format of the book and its stanza-pages, the reader appears in the position of patient observer sifting the contents of the quadrat, which we could read as an ecopoetical twist on the lyric’s trope of spectator-at-the-window. Given this understanding of the quadrat as a frame marked out on the land for the purposes of scientific study, I wonder: What kind of experiment is this? The answer: I don’t know the rules / but I follow them…

It seems to me that Headlands Quadrats has gridded out an emotion, while what’s inside continuously threatens to rupture its perimeters, as when I encounter / for the first time a coyote / exactly the color of July… I want, at once, to cradle the poem lovingly and to throw it across the room in delight. This might be what it feels like to be in a landscape / where purity isn’t possible…

There’s a kind of humor that poetry, in particular, lends itself to. Like most if not all humor, it’s about timing, tension, withholding, and release. In poetry, it occurs in the line break, and it brings us back to the ludic’s fundamental source, which is rupture. Laughter erupts, much like the ovarian cyst that breaks in the first lines of Stephanie Young’s It’s No Good Everything’s Bad:

Ovarian cysts break through the banal structures of everyday life with a kind of primal force—a spontaneous revolt that cannot be manufactured or orchestrated, as much as the organizers of the gender strike might have hoped it could be. 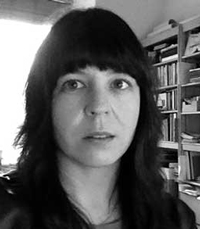 It’s No Good Everything’s Bad is also comedy in what we might call a formal or dramatic sense. The poem begins in conflict—a ruptured cyst that parallels a gender strike that coincides with and reflects the wider political unrest in the United States. It begins in illness and explodes into Wikileaks, illegal civilian surveillance, fascism, conspicuous consumption, labor union disputes, and American imperialism (there’s even a honeycomb guillotine to remind us how far beyond “second time as farce” we have gone), before it regathers itself, reaffirming community through a roll call of political radicals, writers, artists, activists, and friends.

In this poem, which is written in playful dialogue with Russian poet Kirill Medvedev’s It’s No Good, translated by Keith Gessen, I find that it’s another Russian author, Mikhail Bakhtin, and his ideas on “the grotesque” as a radical form of popular art with revolutionary potential, I’m thinking of most. As Bakhtin writes in Rabelais and His World (trans. Hélène Iswolsky): “In grotesque realism… the body and bodily life have here a cosmic and at the same time an all-people’s character… The material bodily principle is contained not in the biological individual, not in the bourgeois ego, but in the people” (19).

Or, as Young puts it:

what can I say about a ruptured ovarian cyst that someone hasn’t already bitterly reported
on the Sutter Health Alta Bates ER Yelp page?

It’s evident that the body in this poem is porous, fractured, like the split and offset semicircles rendered in red Ben-day dots on the book’s cover: “not a closed, completed unity; it is unfinished, outgrows itself, transgresses its own limits… open to the outside world” (Bakhtin 26). The body is breached vessel, ruptured form, and rupturing force. Young continues:

We hear the doubleness in this especially revolting body—this body that revolts, inciting revolt, which is sometimes confused with revulsion. This is the look of “visible disgust” Young catches on the doctor’s face as he leaves the bedside of another patient. When the body revolts, it “discloses the potentiality of an entirely different world, of another order, another way of life. It leads men out of the confines of the apparent (false) unity, of the indisputable and stable” (Bakhtin 48). It’s those who desperately adhere to the falsely atomized individualism and unity of the body (probably all of us to a greater or lesser extent) who feel revulsion when bodies unfold their dialectics of birth and death, consumption and defecation, dissolution and reconstitution, head (high) and buttocks/genitalia (low), spiritual and material.

“The essence of the grotesque,” Bakhtin writes, “is precisely to present [this] contradictory and double-faced fullness of life” (62). I want to suggest that the “contradictory and double-faced fullness of life” is precisely also the breed of humor that runs through It’s No Good Everything’s Bad. It’s the humor of the line break that swerves, producing a momentary double-consciousness. It’s the humor of lives and bodies and poems that run parallel to each other but with slapstick difference—as when Groucho and Harpo Marx imperfectly mime one another’s movements across a doorway masquerading as a mirror. Even the title of this book folds back on itself in a kind of doubled-over belly laughter, Everything’s Bad being another possible translation of the Russian-language title Gessen renders It’s No Good.

As in this echo-play of the title, and in the manner of comedy, the poem’s ending loops back on its beginnings but with a widening aspect, which is amplified, finally, by the unbridled body’s boastful joy:

the cyst is 4×6 centimeters
the kind that bleeds into itself
spreadsheet, heating pad, ibuprofen

but for these purposes I have to swagger, good naturedly

Headlands Quadrats and It’s No Good Everything’s Bad speak to anyone who appreciates poetry, and lovingly handcrafted poetry chapbooks. Both works strike a delicate balance between lyric and narrative modes—the former leaning further into lyric and the latter into prose narrative. Headlands Quadrats will be especially notable to those with an abiding interest in ecopoetics, and It’s No Good Everything’s Bad to those drawn to feminist poetics, Marxism, and humor. Both chapbooks can be found at Doublecross Press’s website. 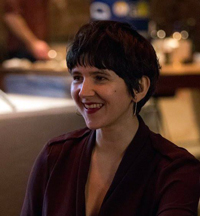 Rachael Guynn Wilson is a writer living in Brooklyn. Her work has appeared or is forthcoming in A propósito de nada / Apropos of Nothing (Aeromoto and Wendy’s Subway), apricota (New Draft Collective/Secretary Press), Argos Books’ 2018 calendar, Brooklyn Rail, Elderly, Evening Will Come (The Volta), Free Spirit News, Jacket2, Ritual and Capital (Bard Graduate Center + Wendy’s Subway), Textual Practice, and the Reanimation Library’s Word Processor series. She is co-founder of the Organism for Poetic Research and Project Coordinator at Belladonna* Collaborative. She holds a Ph.D. in English from New York University. She formerly co-authored an arts blog, Most Perfect World.