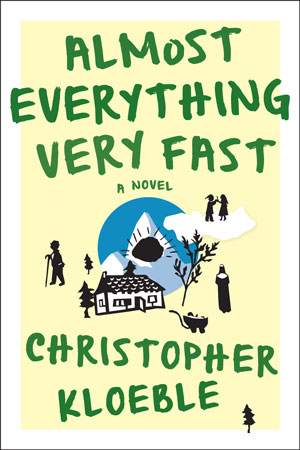 Like the best coming-of-age stories, Christopher Kloeble’s Almost Everything Very Fast addresses universal concerns by asking personal questions. Nineteen-year-old Albert, raised in an orphanage, wants to know why he was given up by his anonymous mother and the father he knows: Frederick Arkadiusz Driajes, a grown man with a childlike mind. Albert has gotten nowhere by following the “Hansel and Gretel crumbs” he’s found in Fred’s attic: a photo of Fred with a red-haired woman, a few auburn hairs plucked from a comb. When Fred’s terminal illness imposes an urgent deadline, Albert visits him in Königsdorf one last time—but his “infinite questions” lead to still more questions: What is love? In what ways do family ties bind us? Is nurturing natural? Do parents cause their children more harm than good?

In Segendorf, Fred’s ancestral village, to love is to discard. For nearly 400 years, residents have been compelled to hurl their Most Beloved Possessions off the rocky bluff of the highest hill at the annual Sacrificial Festival. During one such celebration in 1912, incestuous (and murderous) twins Jasfe and Josfer Habom conceive a son, Julius, whose birth brings shame but also relief: the baby is not a “Klöble”—the local term for the “clumsy, stupid fellows” who “test a parent’s love.” Unknotted from their lineage—their mother died in childbirth and Josfer kills their disapproving father—they are scorned by hypocritical neighbors in a village where inbreeding is a cultural norm.

Their second child, Anni, orphans herself and her brother by burning down the family’s home with their beloved parents inside. Julius takes off with Wickenhäuser, the town mortician, who offers the boy as a companion to his war-widowed mother Else (Julius’s “first love”), to pay for freedom from filial responsibility. Back home, Anni wastes away until she marries Arkadiusz Driajes and gives birth to the Klöble-esque Fred, rekindling her brother’s covetous love. Meanwhile, Julius impregnates a woman he doesn’t love—the devoted Mina, who gives birth to Ludwig, who will one day marry Klondi, who loves the idea of motherhood but can’t stand the scent of her actual daughter, Marina.

These stories of entwined Bavarian villagers are fragmented, like memory, scattered throughout the book in numbered sections of thematically titled chapters organized by association. But whose mind is arranging these pieces? And what larger picture do they fit? While Albert pursues his origins, this is another puzzle for the reader to solve. 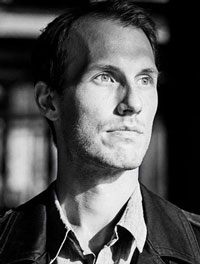 Kloeble offers scant clues in the prologue, introducing a narrator who is 80 years old and under nurses’ care, promiscuous with his love and prolific with children, both hopeful and haunted. “I haven’t forgotten a thing,” he says. “I remember the beginning and the end, and all that lies between. I’ve seen a story become history and the other way around.” What’s past is apparently prologue—and, as this still mysterious storyteller implies, the fragments that follow relate to the orphan Albert’s roots, though they’re not related by him. Equally telling as these autobiographical details is a line justifying the book’s nonlinear narrative: “If only they knew what lies ahead of them! The poor things believe that their lives will spool out just the way they’ve imagined. Eventually, they’ll figure out that you can’t set a course for things.”

Kloeble, who is a scriptwriter as well as a novelist, won the 2008 Juergen Ponto-Stiftung prize for best German language debut for his first book, Amongst Loners. And what he attempts here, in his third, is admirable: a plot-twisting, page-turning, nine-part literary mystery spanning four generations and fit into just 306 pages, an economy he achieves by including documents and referencing folklore, fairy tales, and historical events to give the story breadth and depth. Recurring images—such as Else’s bright-white wedding dress, which Julius first offers to his sister Anni and then makes Mina wear like sexy lingerie, and which strangles his young granddaughter Marina to death when she falls from a tree while playing dress up—are like buoys marking underwater charges in a roiling sea of plot.

But while the plot is compelling, its relentless pace and narcissistic narrator (who, fifty pages in, we learn is Julius) create emotional distance; it’s like trying to care about people glimpsed from the window of a speeding train while your travel companion loudly tells his life story. Because Kloeble covers so much ground so quickly, he sometimes has to resort to awkward summaries to reorient the reader or explain characters’ behavior. In this passage, Julius answers the reader’s question about why he pines for his sister but doesn’t return home to her:

The longing for Anni was like an invisible thread coiled around my chest. Now and then it was as if she tugged on it, so that my heart throbbed and I was afraid I might forget her. Then I’d ask myself why I hadn’t tried to make contact with her by now, and I answered that it was impossible: there was no mail delivery to Segendorf, Wickenhäuser’s next excursion south was beyond the horizon, and I was much too young to travel on my own. Looking back, I think these were only excuses to salve a guilty conscience. The real reason was that I preferred Schweretsried to Segendorf. Even if I had to sacrifice the proximity of my sister.

Albert’s surrogate mother at the orphanage, Sister Alfonsa, gives chess lessons lost on Albert, who uses his “chess notebook” to imagine maternal reunions and list the reasons a “perilously stupid” mother might desert her child. As Albert closes in on his personal mystery, his anger is gradually transformed to empathy. But Albert’s coming-of- age story is entangled with Julius’s self-serving retrospection; an orphan’s point of view directs the reader’s gaze, presenting the elderly Else’s death, Anni’s refusal to indulge her brother’s incestuous desire, Klondi’s indifferent mothering, and Alfonsa’s independence as collective evidence of female abandonment. As disturbing as the casual cruelties the novel depicts—sexual coercion, bullying, rape—is its depiction of these female characters, who express themselves in primitive ways while the tiresome narrator pontificates. Anni starves herself and washes obsessively; Else speaks in grunted syllables; Klondi tries to record her story but can only produce a blank tape.

Near the end of the book, Julius recalls pig farmer Markus, an autodidact who reinvents himself as a Nazi figure obsessed with the racial integrity of the German nation. “I understood that I couldn’t, shouldn’t, mustn’t be the way I’d been any longer,” says Markus. “Because almost everything goes by very fast. A love. Our lives. Simply all of it! There’s not a lot of time. Anyone who doesn’t comprehend that will get lost in hopes and memories and die without ever having lived. The books opened my eyes, I came to understand what I love you really meant: to accept myself. Because that’s the first step toward growth. You have to realize who you are.” The old man offers the story as if to justify his own past betrayals, but it’s flimsy scaffolding for Germany’s historical crimes.

Ultimately, Kloeble’s ambition is undermined by overwrought sentiment, which evokes Goethe’s questing young Werther, but is too pervasive to blame on Albert (or Kloeble’s translator, Aaron Kerner). Adolescent narcissism is a hallmark of Albert’s developmental stage—and in the best coming-of-age narratives, authentic depiction of this temporary, transitional state of mind contributes to the work’s success. But Kloeble’s book suffers in the hands of an adolescent old man, who aspires to profundity though he’s perplexingly shallow.