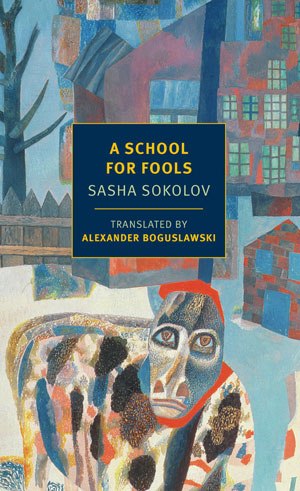 A School for Fools does not immediately strike a modern reader as new or groundbreaking; its central premise is that the narrator, a male youth attending a school for the insane, is unreliable, territory well-tread by canonized authors and Intro-to-Fiction students alike. Perhaps the original novel by Sasha Sokolov preceded (or at least coincided with the origin of) the pervasive cliché of the asylum story, having first been published in 1976, but a reader of this new translation by Alexander Boguslawski can hardly be blamed for her skepticism after glancing at the book’s back-cover blurb. As the asylum motif becomes apparent in the text (the speaker and his alter ego discuss appointments with Dr. Zause, interrupt each other, etc.), trepidation is unavoidable.

In context, the image of a looming institution, while predictable, makes some sense in A School for Fools. Born in Canada in 1943, Alexander (Sasha) Sokolov grew up in the USSR after his father was deported from the West for espionage. Over the years, he made several attempts to escape the Soviet Union to no avail; it was only in 1975—a year before A School for Fools was first published in the West to praise from the likes of Vladimir Nabokov—that Sokolov was able to flee the USSR and its censorship. Prior to that time the novel was circulated covertly in the USSR as samizdat, as its odd narrative format ran counter to the official aesthetic of socialist realism. Alexander Boguslawski writes in his translator’s note that one reading of A School for Fools is as “a metaphor for life in the Soviet Union, where people who did not fit in … were often detained and interred for long periods of time in mental institutions.” While this is perhaps an apt reading—and while, by Boguslawski’s estimation, this new translation pays closer attention to wording and context than the original 1976 edition—one still wonders if such a text does anything different than the countless others that rely on an “outcast” narrator being policed by society and whatever metaphor-of-the-day a mental institution embodies.

But to refuse to read beyond the familiar asylum premise in A School for Fools is to preclude a deeper appreciation for the form of the novel. It may be useful for the reader to ignore the motif entirely, apart from its value in allowing the author (and subsequently the translator) to explore a variety of linguistic stylings in one place. Sentences span multiple pages at a time, paragraphs refuse to break; the speaker(s) author their own unrelated compositions mid-book; poetic language morphs time. And throughout it all, the author taunts the reader with cogent characterizations of what he’s doing, e.g., “this sequence of days is some poetic gibberish.”

It is this self-awareness that saves A School for Fools from getting lost in the disorganization that drives it: by design, it is nearly impossible for the reader to follow the main character, “student so-and-so,” along any one train of thought. Every so often, however, Sokolov redeems reader efforts with bursts of meta-analysis that suggest a grand plan of tongue-in-cheek manipulation—only, the reader seems to be in on the joke. “It may turn out that all of this is a dream,” he writes, with an awareness of at least one literary cliché at work (while it does not explicitly turn out that all of the book is a dream, Sokolov dangles the possibility in front of the reader, expanding the universe of what’s possible here). And should the reader have missed the point of the book, Sokolov sums it up for her in a dialogue between student so-and-so and an author-character that appears within the last twenty pages: 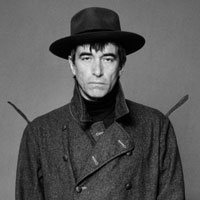 The author’s critical eye toward his own work is complemented by the translator’s notes and analysis, which suggest the difficulty of translating Sokolov’s wordplay and stream-of-consciousness style. One does wonder whether the linguistic play was perhaps more gripping in the original Russian (and if it would be better honored without explanation from Boguslawski), but it is a testament to Boguslawski’s work that certain lines force the reader to pay attention to their mad, artful construction. In the meditative reverie of reading student so-and-so’s ramblings, it is striking to find something like “I wish to be maddeningly repulsive to you, I’ll break into your dreams and your reality like a hooligan … I’ll break in with a bloodied tongue and, implacable, will shout to you about my beautiful unattainable poverty.” This sort of prose, accompanied by the appearance of recurring characters—Savl Petrovich, the visionary geographer; Veta, so-and-so’s love interest; Tinbergen, a witch-like woman who works at the school for fools; Perillo, the principal who imposes a silk-slipper mandate; a phantom postman who bicycles ghost-like through the streets—occur often enough to keep the reader’s interest, and offer Sokolov’s experimentation a sense of readability.

The key, then, to reading this new translation of A School for Fools may be to abandon the literal and conventional in favor of a reading experience as rambling and associative as Sokolov’s writing. Reading without expectation of structure or plot (i.e., reading past the asylum premise) allows an appreciation for the deep surreality and craft of the book. The reader only notices how frequently people turn into birds or lilies, for instance, when she ceases trying to interpret each individual word; the text (and perhaps by extension all text) becomes more pliable, the spectrum of the possible broader. Just as student so-and-so seeks “an auto-da-fé on the scale of all special schools of the world,” the reader must seek liberation from her expectations of how a novel should work to enjoy such images as the dead Savl Petrovich warming his feet on a bathroom radiator, or student so-and-so’s winter butterfly collection, or the fact that his dual egos can exist separately enough to prank their ornery father. In sum: A School for Fools has considerable boundaries for a reader to hurdle, but a persistent one will find it enchanting, odd, and worthwhile.

is a graduate of the University of Pennsylvania. Her work has appeared in The Pocket Guide, the Philos Adelphos Irrealis chapbook, and McSweeney’s Internet Tendency. She has served as an editorial assistant for Jacket2, the editor of the Penn Art & Culture blog, the managing editor for Penn’s Filament magazine, and an enthusiastic employee of the Kelly Writers House.