A STAB IN THE DARK
by Facundo Bernal
translated by Anthony Seidman
LARB Classics, 2019
reviewed by Johnny Payne 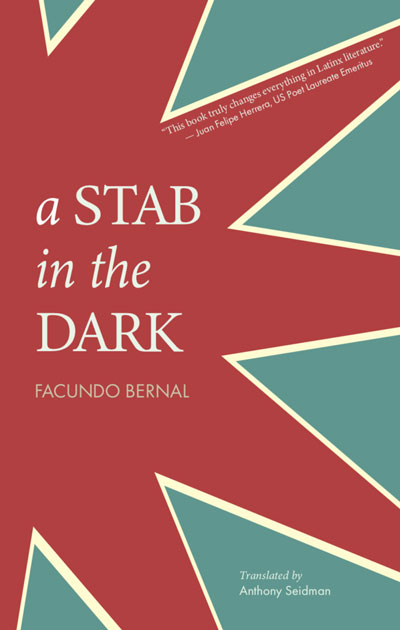 What is good poetry? Is it what the masses decide? (Not that there are really any masses reading poetry.) Or do the arbiters of taste (other poets, professional poet-critics like me) get the last word? Gertrude Stein is one of the early practitioners of that ungainly creature, often misbegotten, and difficult to evaluate sub-genre known as the prose poem:

One imagines this first existing as a notebook, non-committal if tending toward provisional completion, then, as Stein might put it, becoming what it became. In his most explosive work, Trilce, César Vallejo’s more formally complex poems are not necessarily more ambitious than those done in prose, in which he tends to offer greater immediate clarity, yet equal force. In fact, some of these explorations are more heightened and exploratory than the often-sentimental and casually conventional Human Poems.

I suffer pain now without any explanation. My pain is so deep that it never had any cause—nor lack of a cause. What cause could it have? Where is there something so consequential that it stopped being its cause?

The dexterity of Stein and Vallejo in making a paragraph feel like a series of verses has not kept others from dumping a lack of metrical skill into a prose box and wrapping a bow around it, as if a touch of lyricism might save a clutter of confused poetic impulses. 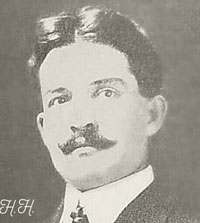 To contemplate this issue profitably, certainly it helps to begin with a flexible definition of poetry, e.g., the elusive dictum “the best words in the best order.” We could start with a notion that a poem be broken into lines. True, many are not, especially those denominated prose poems, yet as Paul Fussell has shown, throughout history, most poems are. But can’t anything be broken into lines, arbitrarily qualifying on a technicality? What do we do with the poetry of a writer like Facundo Bernal, whose compositions, if the lineation were removed, might not feel like poetry at all? In the American tradition, Edgar Lee Masters comes to mind, with his relaxed, prosy style.

Charles Bukowski represents a case where lineation, at its most mechanical, may consist of simply hitting the return button (or in earlier times, cocking the bar). His poems often read, as his personal mythology would have it, like jottings on a bar napkin, in which he went to the next line mainly because he ran out of space on the napkin, which inevitably had a picture of a horseshoe on it, taking up precious compositional space.

They’re not going to let you
feel good
for very long
anywhere.
the forces aren’t going to
let you sit around
fucking-off and
relaxing.
you’ve got to go
their way. (“relentless as the tarantula”)

Facundo Bernal’s poetic sketches of life in Mexicali, Tijuana, and other locales such as Los Angeles, complicate the question of lineation.

The elections for the very
illustrious City Council
have come and gone,
like flickers across
the silver screen: in silence.

LA PRENSA has transformed
itself overnight
into a paper that distinguishes
wrong from right.

Ambrose Bierce, both journalist and poet, makes for an apt comparison. Yet perhaps a better point of reference are the “traditions” of the costumbrista Peruvian Ricardo Palma, whose witty, satirical, sometimes profane portraits such as “La Pinga de libertador” (the liberator’s cock), render an impious social critique. Anthony Seidman is up to the task of situating his crackling translation of Bernal, as explained in his preface:

If I were to recreate the prosody exactly, the poems would sound like doggerel . . . After deliberation, I decided that the best way to recreate this book as oral poetry was to echo the Caló, the slang and the overall exuberant and spunky tone of the original, abandoning rhyme.

And recreate the book he has, as one can judge from referencing the Spanish language half of this bilingual edition. The line breaks are there, but the poems now feel like urgent, acid journalistic posts whose lampoons must be quickly consumed before they become yesterday’s news.

Excuse me if I
use a metaphor
(it sounds more literary):
It’s said that with
this new campaign,
of “Blue Sunday”—
as they call it here
in Yankee-landia—
boy canaries
cannot cohabitate
with girl canaries;
for if they should kiss,
the wrathful saints
would unleash their ire
upon canary souls.

Without detracting from Bernal’s book, it’s fair to say that Seidman’s able translation accounts for half the success of this edition.

The lines lend speed, if not prosodic uplift, and accentuate the acerbic tone toward prudes. Bernal has a keen eye and a smart mouth, and this combination provides many satisfactions. Without detracting from Bernal’s book, it’s fair to say that Seidman’s able translation accounts for half the success of this edition. In particular, the lexicon has a superb unity.

these ‘fatties,’ ‘lankies,’ and ‘punies,’
almost kiss one another on the lips.

It is said the two things most difficult to translate are humor and slang, and on this score, Seidman succeeds, laying it on even thicker, as he has explained, to compensate for the inevitable transcultural and stylistic losses. The choices are strategic. He has a solid plan and sticks to it, thus making a single voice out of what could be a scattershot exercise. What might make Bernal a troublesome dinner guest firing off one-liners meant to stir things up, is a large part of his success on the page.

“Jesus! That music
they play at the dance hall—
Blind Simon’s orchestra
had them all beat.
See how they stretch their legs
in the blink of an eye?
Like little tin monkeys!”

“Old Lady, if anything
they show great restraint—
way back when, you’ll recall,
they would dance cheek to cheek.” 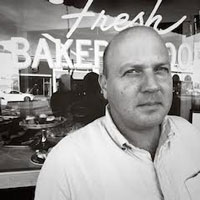 What most unifies this book is the ambiguous voice. In many poems, it’s difficult to know whether Bernal the poet is a censorious curmudgeon or a beacon of (skeptical) liberality, sniping against the myriad “characters” he portrays. Are the opinions his or those of his social types? Is he in favor of women’s sexual freedom, or does he misogynistically see them as nouvelle sluts made licentious by Yankee culture? For sure, everybody gets punctured, even when they’re innocent bystanders. Politicians, inevitably blowhards, come in for the worst treatment. I began as a reader resisting the putative charms of A Stab in the Dark until I too, knife-wounded, succumbed.

The edition is enhanced by short, insightful prefaces by Yxta Maya Murray, Josh Kun, and Gabriel Trujillo Muñoz. Occasional endnotes regarding historical personages and social situations help clarify the journalistic references so that the poems become fully “newsworthy” a century later. There is plenty in this book to recommend it and to argue for Bernal’s continue relevance.

Johnny Payne directs the MFA in Creative Writing at Mount Saint Mary’s University, Los Angeles. TCK Press will publish his novels Kilcairn, Maysville, and Silver Dagger in 2019 and 2020. His poetry collections Vassal and Heaven of Ashes were published by Mouthfeel Press. He is currently writing an autobiography, Confessions of an Also-Ran.