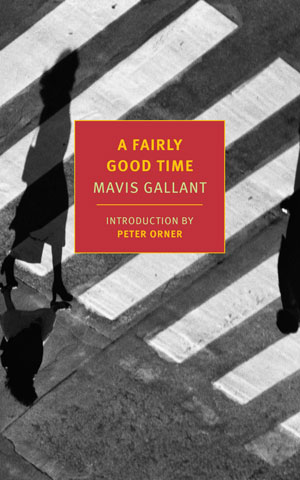 A Canadian in Paris who must always remind her French friends that she is not American. A young widow who remarries a Frenchman, whom she later divorces. A twenty-seven-year-old who is “about like [she] always [was], to tell . . . the truth. Reading instead of listening.” This is Shirley Perrigny, formerly Higgins (nee Norrington), and the protagonist of Mavis Gallant’s 1970 novel A Fairly Good Time.

Gallant, just like Shirley, was a Canadian who made Paris her home. Perhaps known best for her acclaimed short stories, Gallant wrote two novels, A Fairly Good Time and Green Water, Green Sky. These two novels were re-published by the New York Review of Books in 2016, just two years since Gallant’s death at age 91.

Set in Paris in the 1960s, A Fairly Good Time is Shirley’s story, but Gallant does such a remarkable job capturing the confusion and chaos of life that it could be anyone’s. Shirley, who struggles to recognize the reality around her, is very easy to relate to, at least for this reader. Shirley, indeed, loves to read. She tries to handle other people’s problems, often by relating their lives to a wide range of authors, references that either her Parisian friends miss, because it is her own “folklore” or references she is hesitant to make aloud. Shirley studied French literature, but “the authors she had been taught to consider important had turned out to be despised in Paris,” so she does not always share how much some of the French authors mean to her. Not to mention that her French husband “Phillipe had confused her . . . by praising Gone with the Wind (all that a novel should be) and The Grapes of Wrath (appreciated even by Hitler as portraying the real America).” When she references authors, like Jane Austen, one of her friends asks if she is the author of Wuthering Heights and then asks if Laurence Olivier had played in the filmed version of Wuthering Heights. For Shirley, there is both a literary disconnect with those around her and a disconnect with her own reality. After all, it takes her most of the novel to realize that her husband has left her.

For Shirley, there are two questions: “Why aren’t people ever clear? Why don’t they say what they mean?” The novel’s form, a collage of of letters, excerpts, conversations, and thoughts, reflects Shirley’s questions and the chaos and confusion that must follow. It isn’t tidy, but neither is life. Gallant tells Shirley’s story in such a way that it is not always linear and not always clear if Shirley is thinking or something is happening presently. If A Fairly Good Time is a story of Shirley’s life, then it, too, must wander and resist order and tidiness.

While the effect of this is that the novel wanders and sometimes feels disjointed, Gallant roots the story in literary references—Shirley’s own “folklore”—and in the way people interact with and over food. So many scenes take place in restaurants or uncomfortable family dinners. In fact, over a Sunday dinner at her mother-in-law’s, Shirley anticipates the conversation “would center on the danger of food, of eating in restaurants, of eating anywhere but [there].” To be sure, Gallant would advise the reader that food and restaurants can indeed become dangerous because it is over meals and in cafes that Shirley picks up her various acquaintances that lead her away—often disruptively—from dealing with her own problems. 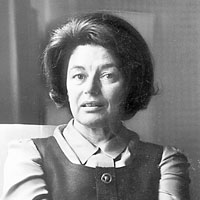 While the reader’s first introduction to Shirley is through a letter from her mother, the novel really begins when Shirley comes home from helping a friend who had tried to kill herself. Upon arriving home, her husband, Phillipe, is not there, and for most of the novel, Shirley struggles to realize that he is not coming back. Along the way, Shirley accidentally picks up a new friend, Claudie Maurel. In fact, initially, Shirley does not even consider herself Claudie’s friend, but she continues to grow more and more involved with Claudie and her family. Shirley’s slow transition from being Phillipe’s wife to recognizing that he is not coming back begins when she visits Claudie’s family for a meal and cannot help but compare it to dining with Phillipe’s family.

Although married to Phillipe, Shirley remains Mrs. Higgins in the telephone book and according to her work uniform—another indication of the distance between her real self and the way she imagines herself. This divide only further complicates her relationships with those around her. Higgins was her late husband’s last name, and Shirley is always somehow reaching backward in time to Pete Higgins. It is not until close to the end, though, that the reader learns how Pete died in an accident that could have easily been avoided. But that might be Gallant’s point. Accidents happen, and sometimes they can be avoided and indeed should have been avoided. But they still happen, life goes on, and we have to figure it out as best we can.

Gallant delivers beautiful and poignant sentences that often seem to double as advice or at least valuable insights. “A lady never needs anything. Never needs, never wants. Anyway, never asks,” she writes. On Phillipe and his sister, Colette: “One day he and Colette would probably fight like wildcats for everything in the place, even the useless can opener, each of them wanting to own their common past.” When I read this particular sentence, I decided right away that Gallant was a very insightful writer. In one sentence, originally published in 1970, Gallant had captured some of my own recent experiences in 2015 with my grandmother’s move and my family’s desire for can openers and bottle openers in order “to own their common past.” It’s not the most important sentence in the book, but it’s an example of Gallant’s ability to tell a story and provide the reader with some useful thoughts about going through life—how it unfolds and how people make sense of it. Through Shirley and her friends and family and their varied interactions, Gallant captures all the chaotic moments that make up a life.

By the end of the novel, Shirley has finally realized that her marriage with Phillipe is over, and her mother has died. Shirley keeps going, though. She would not consider herself sad, and she remains frustrated and fascinated by everyone else around her. She sends Phillipe a letter at the very end, telling him she has come around to his way of thinking about a nursery rhyme that he insisted had a deeper, political meaning. Shirley seems perfectly content with her divorce and to mail the letter, with some idea that “they would see each other again in time, in dreams and recollections.”

In a letter to her mother, Shirley concludes by writing, “I’m about as I always was, so please don’t worry.” While the reader hopes for Shirley’s happiness at the end of the novel, Shirley—as she tells her mother—would not want the reader to worry about it. She’ll always be Shirley—happy or not. She just is as she always is. Perhaps, that is Gallant’s point about life, too. Life is “about as [it] always was, so please don’t worry.”