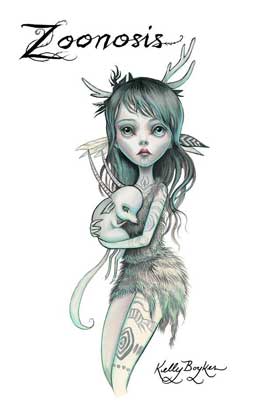 Kelly Boyker’s chapbook, Zoonosis, is loaded from cover-to-cover with fantastical creatures, folktale monsters, and twentieth-century “freaks” drawn from the pages of Robert Ripley’s “Believe It or Not.” The Ripley’s characters are of particular interest because they are often postmodern updates of the original chthonic creatures of Greek myth. There is a child Cyclops, for example, a tribe of crab people, and Orthus—the less-famous, two-headed brother of Cerberus. The modern-day Orthus is the result of a macabre experiment by Russian scientist, Vladimir Demikhov, who “successfully grafted the head of a puppy onto the body of a full grown Mastiff” (“Orthus”). Time and again, as this example makes clear, the true monsters of Boyker’s world turn out not to be the wolves or the so-called freaks, whom she often treats with compassion and understanding, but the “ordinary” people. Even when the wolf bites, she seems to be saying, it is only acting according to its nature. The humans, on the other hand, sit

dreaming of cotton panties blowing on a clothesline . . . teeth jutted forward, all the better to eat them, all the children. (“American Dictionary”)

The first poem in the collection invokes the image of the wolf: “Of course the story begins with a wolf,” says Little Red, but this wolf—unlike his cousin of the German folk tale who meets his end at the hands of a hunter or a lumberjack depending on which version you are reading—suffers a far more ignominious fate than being cut open with an axe:

I ask only that he reconsider the cone I have placed around his neck, the way he walks into walls, confused. (“Little Red”)

Like a house pet, this wolf has been partially domesticated, but, tellingly, it is the speaker of this poem—not the wolf—who seems defeated. The poem ends with Little Red—even though her fingers have all been bitten off—asking the diminished wolf to reconsider “the elegance of his need,” the need being his desire to “pull your entire body through my teeth.” 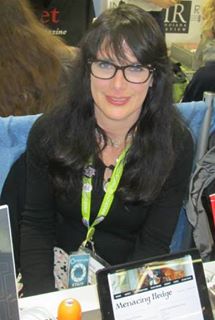 One thing that I noticed throughout the collection was the proximity of the word “pretty” to acts of physical violence, often to biting and tearing of flesh. There are teeth all over the place, each set more menacing because of the word “pretty” and all its sexual connotations. “Pretty” is really loaded because unlike the word, “beautiful,” say, it carries with it connotations of innocence. In “Curtsy to the Drain Pipe,” for example, the speaker says, “There, you chain smoked Pall Malls and promised me I was pretty. / There, you bit my hand and ran into the woods.” Similarly, in “Vanishing Points,” the speaker bites her own wrist “[b]ecause the absence of prettiness can lead to invisibility / she . . . used her teeth for the degloving.” And in “Meat Products,” the speaker describes a couple meeting for sex at a motel. The man says,

I don’t kill things . . . Not even fish. I catch them; tell them they’re pretty and throw them back in the river

while the woman thinks of the many car crashes she has witnessed out the motel window: “Gleaming packages of flesh / and muscle cut to fit your plate.” This man, who is so comically compassionate toward fish, is predictably cruel towards the person who is sharing his bed:

I don’t make promises, and can you please leave? I have to get up early in the morning.

We are menaced by the word “pretty” throughout the text. This comes to its apogee in two powerful poems: “How Pink Becomes a Duty” and “American Dictionary.” In “How Pink Becomes a Duty,” the female protagonist finds herself the object of lust at a convention of podiatrists. She acknowledges she was there “(just) to be pretty,” but the man who ultimately takes her to his room

did not touch her, instead he made

a cut between his genitals and rib cage and extracted his own liver and spleen and told her, You are not pretty.

You are the end of things. Tentacles, blisters, fever sores. Finally, he made her take his money.

He does not want sex. He wants to be torn asunder. He wants to be infected, but to do so he must first kill her prettiness and the innocence associated with it, hence the sudden venereal language and the forcible casting of the female character into the role of prostitute. The other poem is the terrifying, “American Dictionary”—what Boyker called “a mug shot poem.” The poem is made up of a series of six vignettes, each based, I assume, on a different old mug shot. In one stanza, the character says,

the one half of me wanting to pet pretty girls, the other half wanting to strangle them until their tongues swelled.

Once again, we have the proximity of the word “pretty” to physical violence of a sexually pathological nature. Zoonosis is not simply about the one-way transmission of disease between species—as the title would suggest. The transmission is reflexive; that is, the transmitted material becomes an indistinguishable part of the targeted organism, which has the consequence of blurring the distinction between vector and host, between human and animal, between sex and violence. These persona poems are full of a very satisfying ambiguity, but the one thing that seems to remain constant no matter what the context is Boyker’s compassion towards those on the margins. In an interview with Lauren Henley at Aperçus Quarterly, she says, “I am drawn to the marginalized and I want to tell their stories in a respectful but compelling language. I think we both write about beings and spaces on the edge of existence. This is the nibble that bites us back.”