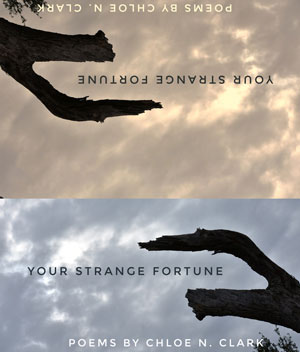 I first encountered Chloe N. Clark through her prose, but even then, it was clear to me that she was a poet. Her work often feels multimodal in form, something that shines as a written text but that also seems eager to be performed aloud. Her debut collection Your Strange Fortune is no different, full of rich and devastating moments, each poem stretching with fresh life on the page or on the air. Some of these poems also function as works of visual art, such as “Flora and Fauna of the Outer Rings,” embodying their meaning in shape as well as word.

Fans of Clark’s work will recognize some of these poems from her chapbook The Science of Unvanishing Objects, but not only is there a wealth of new poetry here, the way she’s reframed these poems gives each line new energy and weight. The collection is offered, from the title onward, as a fortune-reading for the reader. Your Strange Fortune whispers in your hands, and you’re struck with the odd feeling that perhaps the book’s seeing through touch like an octopus, examining the love and lifelines of your unsuspecting palms. In other words, this poetry collection reads its readers as they read it, creating a reciprocal acknowledgement rather than simply a unilateral communication. The book warns you of this exchange more than once, each section grinning with a sly new epigraph: the first from a Fortune Cookie, the second from a Magic 8-Ball, the third from a Children’s Fortune Telling Game, and the last appears to be from the poet herself.

Clark begins with “Automatism; or What to Visit in My Town,” a poem about a woman who collects hands—the true window into the soul for any self-respecting fortune teller—its opening rhythm redolent of that classic Once upon a time: 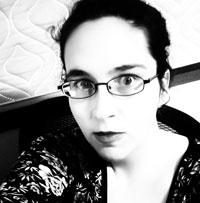 Holding the book, reading these lines, it’s hard not to also wonder if the poem’s a bit confessional as well. It’s hard not to wonder if Clark, or perhaps the collection itself, is confessing to being like this woman collecting hands and hands and hands (read: stories and stories and stories), hoping that one of them will catch a customer’s (reader’s) eye such that the customer reaches out and laces their fingers together in a moment of connection and understanding. This desire for connection may be especially poignant for readers today, navigating a world where lines are being drawn starker and starker, walls built taller and taller.

Clark organizes the collection into four parts, Past, Present, Future, and Now. The Past, as you might imagine, is haunted. It’s full to the brim with Longing and all of Longing’s children: ghosts, myths, monsters, and gods.

Clark wastes no time in introducing these children, drawing readers next into the troubled waters of “Like Acheron but Not.” The river here holds echoes of an old pain, things decayed, scorched, and covered up. The river’s creator asks her sister, do you wonder what the river feels like?

but I shook my head
afraid that she
might tell me the river
just felt cold.

Afraid that the river’s pain – her sister’s pain – might be meaningless, afraid that something powerful has been (or might be) diminished, that it might “just [feel] cold.” That “just,” heartbreaking in its reduction of all the river might truly be and feel. In “I Believed Not in God but in Gods as a Child,” the narrator helps build a funeral pyre in the wake of an apocalyptic event and, while sorting the dead’s belongings,

…….I found one tiny
notebook, worn
to softness and most was smudged away
except the letter I
and I wondered if it was the
word. What was useless was burned, paper starts the quickest.

The Past is haunted by this fear of powerful, magical, beautiful things being diminished, and by the longing for them to have any meaning at all. You can see it not only in the story of this poem, but in its shape. The way Clark lends weight and longing to “one tiny” through the line-break, creating a dangling sense of hope that perhaps this isn’t such a small thing after all, perhaps it means something. She capitalizes on this hope, suggesting that, despite the notebook being worn, despite most of its contents being smudged away, there still might be meaning here in the sole-surviving and notably-capitalized “letter I,” the line standing alone like the letter itself, a pillar of hope and intention, a word or a beginning or— Or another “useless” thing tossed onto the fire. The devastation of an entire apocalypse felt in the burning of a single notebook, a single letter.

But as the Fortune Cookie, “circa pre-collapse,” warns us: “If you look too often to the past, you’ll never see where you’re going.” And besides, not all ghosts live in the past. In “The Double Dark Theory of Our Universe,” Clark cracks open the pain of possibility, writing:

I too believe that our lives are
not as interwoven as we are led to
believe, that you and I were
only coincidences in the others
timeline. Still, something

Something remains. Something hangs there and needles us with its presence. Something itches and eats and refuses to let go. The Present, Clark reminds us, has its own phantoms, tormenting us with possibilities of what might be and what might have been.  For instance, in “Missing Girls, Continued,” the narrator is haunted by dreams of lying up with her missing friend, together watching shooting stars disappear and knowing every one of them has a name.

Possibility blurs the path, your vision, turning dogs into wolverines as seen in “Filed Under Hazy Creatures,” and superstition into shields, as Clark writes of in “Tricks to Keep Away the Dark.” The possibility of connection and the possibility of danger creates wonders and terrors. It tantalizes and urges us onward.

But perhaps the strangest ghost of all belongs to the Future, embodied in Hope, a creature demanding resilience and imagination in the face of despair. As the narrator of “Sidelong Catastrophe” admits:

that we can solve everything
design cities that fit into

the Earth instead of making
the Earth fit into them

but mostly we sit at drawing
boards and paint scenes

of decay because that is what
we know

Though the narrator eventually returns to the knowledge that “mostly we sit at drawing / boards and paint scenes / of decay,” still “sometimes [they] imagine” something better. The entire poem from the title itself, “Sidelong Catastrophe,” is about seeing things anew from a different angle, looking at aerial views of rivers and instead seeing the shape of your lover lying beside you, looking at a devastated world and managing to see the hope of a world brought to new life.

The final poem, “In Gratitude,” the only poem included in the Now, shows a man thanking luck for his surviving a car wreck, because something must be thanked. Something must be reached out to and held close. This desire to reach out, to hold and be held, is laced throughout Clark’s collection. The opening poem – the woman with her jarred appendages – ends with her failing to sell any of her collected hands to visitors. Yet the final stanza itself keeps reaching out, yearning, stretching as far as it can to catch the grip, the eye, the heart of its reader:

A willing reader is, by and through this collection, invited to reach out, hold these poems close, and feel them holding back.

K.C. Mead-Brewer lives in Ithaca, NY. Her fiction appears in Electric Literature’s Recommended Reading, Carve Magazine, Strange Horizons, and elsewhere. She is a graduate of Tin House’s 2018 Winter Workshop for Short Fiction and of the 2018 Clarion Science Fiction & Fantasy Writers’ Workshop. For more information, visit kcmeadbrewer.com and follow her @meadwriter.