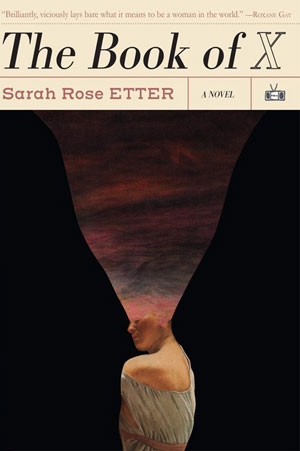 “I was born a knot like my mother and her mother before her,” Sarah Rose Etter’s surrealist debut novel begins, drawing readers into Cassie’s life story, The Book of X. “Picture three women with their torsos twisted like thick pieces of rope with a single hitch in the center.”

Picture, too, Cassie’s family: a father and son who—in Etter’s startling vision—make a living mining meat from a quarry, and a mother and daughter who scrub the house clean with antiseptic lemons while they whittle themselves thin on a bleak diet of rocks. See Cassie’s schoolmates—the male bullies and the no-knot “Sophias,” girls “a boy would like to touch”—who are disgusted by her X-chromosome-linked deformity, driving her to seek a solution in excruciating injections of sugar water. Understand her doctors’ indifference to her painful condition as medical misogyny. The impact of Cassie’s genetic inheritance is “largely emotional,” these doctors proclaim, ceasing research into its cause or remedy because the knot, located just above “the womb,” doesn’t compromise childbirth.

Surrealism seems to be the most rational response to Cassie’s coming of age in a town called The Acres, as a girl blessed or cursed with an ability to see (if not avert) inherent violence beneath the surface of human relationships. In this weird-dreary setting, she falls for Jarred, a cruel sexual predator who carries anger “under his skin that casts a shadow around him.” Of her beautiful friend (the ur-Sophia), Cassie thinks, “I want to slice you open with a knife. I want to hide my body inside of yours.” 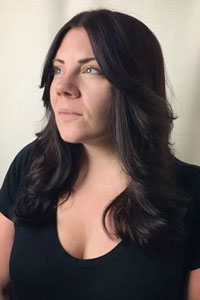 Narratives of adolescence often promote the very conventions they claim to critique, with plotlines that resolve social conflict, such as a longing for beauty or belonging, without illuminating the contradictions that drive these conflicts—in this case, powerlust disguised or misconstrued as romantic love. What makes Etter’s work original and interesting is her frank examination of sexual desire and her feminist interrogation of the idea of the female body as mere decoration or passive vessel.

When Cassie’s father allows her to try her hand at the meat quarry, she turns out to be “a natural,” outperforming her brother by pulling bigger (and therefore more lucrative) boulder-sized chunks from the bleeding walls. This “fine haul” that earns her father’s praise leaves Cassie exhilarated, exhausted—and empowered. Her engine-like exertion not only reveals her physical capacity, but her body’s true purpose: that of converting energy to motion. “The fat falls from my body, the knot gets smaller,” she marvels. “I can see new muscles in my legs and arms. I work fast as my brother, become the slick machine.”

Working at the quarry also releases Cassie’s pent-up rage, “puts her in motion” as the subject of her own story and not merely an object in someone else’s. Sneaking back into the quarry alone one night, she rips “the flesh from the walls, screaming and sobbing against the red.” When her father discovers the damage the next morning, he mistakes it for the work of a hungry wolf, a tribute Cassie silently savors as she hums to herself, “I am the wolf, I am the wolf, I am the wolf.”

But in this worksite where Cassie accesses her strength and righteous anger, she also opens herself up to greater pain. If part one of the book is a relentless inventory of Cassie’s victimhood, part two, in which she moves away from home and gets a job as a legal clerk, is her proving ground. Donning a false heart and a work costume, she labors as a “passionate typist,” professionally smiling to “contribute to the office culture.” Here Etter’s anthropologist’s eye, which makes the familiar (to us) strange, makes the unfamiliar (to Cassie) even stranger. Cassie experiences her new city as “an orchestra of rusting metal, trucks and buildings, full of bodies, faces, color, electricity.” Buying meat in a grocery store for the first time, she’s surprised to discover its alternative source, not mined but slaughtered, packaged, and labeled with different animal names.

Prone to fantastic visions—of hurling herself at a glass mountain of her father’s half-empty liquor bottles, removing her head before sex, excising a black jewel of jealousy from between her shoulder blades—Cassie is, nevertheless, highly attuned to the difference between truth and propaganda. She “keeps track of the facts” with bullet-point lists dropped between fragments of narrative and presents the events of her life as matter-of-factly as her mother’s fashion magazines dictate absurd-sounding, arbitrary beauty trends. These visions, set off in italics, counter Cassie’s lived experience in a way that reads at first like a coping mechanism but proves prescient. The pleasure and puzzle in reading The Book of X is decoding this parallel prophetic story, which operates according to the logic of dreams.

Readers hoping for neat healing after Cassie undergoes corrective surgery may be disappointed by the ending Etter offers in the third part. But I was surprised and impressed by the author’s integrity. Etter measures her character’s change in movement. And though Cassie does find love with a mechanic named Henry—who enjoys his “meditative” work repairing engines because it “teaches you to think different ways around a problem”—love isn’t the means by which Cassie is transformed. As she is returned to her body, as Henry says, “the sum of all parts makes them come alive.”