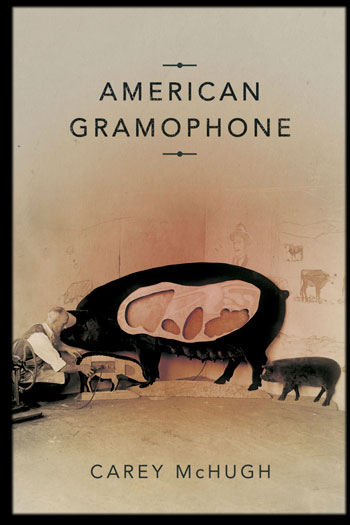 In approaching Carey McHugh’s American Gramophone, one might first consider this question: What is the song of America, or American culture? It’s easy to jump to the obvious conclusions—the United States has strongly defined itself through its velocity, whether in industry, technology, or commercial growth, and its music has become largely representative of these themes, with contemporary pop artists representing the almost-electric shine of the digital age, rock bands highlighting the working-class, and country groups crooning over the “loss” of an easy-going, slow-paced lifestyle.

Beneath these surface associations, however, McHugh challenges our initial question with a more stripped-down idea—what if America’s song isn’t something you can quickly flip to on a radio? What if America’s song is something that deviates completely from the mainstream—something pared to its most visceral form: an instrumental, organic, and natural tone? Think of the vibrating note of a fiddle, the deep strum of a guitar, and bare, haunting vocals. The sounds of folk and Americana that seem to eek out of valleys, creeks, and forgotten forests—quietly shivering their way into the undercurrent of the American everyday. These are the notes that wind from McHugh’s own gramophone, characterizing this dark collection with a taste of folklore and caution that asks the reader to step out of his or her American associations and return to the frontier’s beginning—the land at its most original, and its most severe.

With a taste for the rich and lush image, McHugh’s collection creates, in three sections, a changing picture of America’s past and foreshadowed future. Her preface, “[               ],” provides the first draw of bow against string—“…the moon rusts /” the speaker intones, “on its antique swing all winter over / you will find me armed.” We are brought to a countryside that is without the sprawl of human engagement—the presence of industry or wrought power. Instead, the beating hearts are few, and individual strength comes secondary to the control of nature and the seasons.

Winter is prevalent throughout the entirety of American Gramophone, coloring McHugh’s images in a frosted bleakness that serves to reemphasize how the most basic and organic of things are always at the whim of what the land might bring. Especially in Section One, animals are used as a measure of characterization—the human presence is always engaged with or represented by the animal figure. Communication, too, is not without this return to bestial form, as in “Speech After the Removal of the Larynx”: “There is no difference between sound and / communication; I am satisfied if the strong consonants trigger memory. It is quiet / here. Let speech be heron.” McHugh relies on references to flora and fauna to carry the tune of her thesis, which hinges on the idea that this bleak America, this vacant and cautioned countryside, controls more of the body’s future than forays into the industrial, the mechanical—that “the undertow in every human body cannot be surgically redirected.” 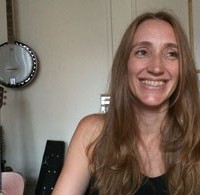 McHugh introduces a cast of characters, from soldiers and farriers to anthropomorphized animals, as reinforcements of this theme. As if history has rewound, our characters seem to lead simple lives that are constantly subjected to the growth of species and presence of creatures that surround them. At times, they seem to muse on the idea of destruction and loss, as if their current state has been dictated by the ending of an age of power and greatness—“Nights, I hid in the rail-yards,” whispers an ex-marksman, “now newly darkened / by a power outage that has signaled a loss greater / than what I can gauge hourly…”

We might understand American Gramophone as representing a history or timeline, with Section One’s barrenness leading into Section Two’s focus on human and animal interaction, and the arrival of the mechanical and commercial. These interruptions challenge the tone, or song, that McHugh has been careful to breathe into Section One: our call of warning, that “From now on I will consider regret a winging / tern, reinventing temp, punishment, apprehension.” The “educated hog” in Section Two’s introductory poem does much to emphasize this idea of transition and colonization—“I couldn’t stand / in a river without quoting Deuteronomy.” Here are people and all of their badness—their wills and wishes for both animal and landscape, turning against the force of what nature surrounds them. Our hog hisses “I took it in then, / the panorama. I don’t want whatever you want most for me”—yet, the animal becomes subjected to the human who takes and conquers. Poems like “Aviaries and Asylums” and “The Plenty” document this history, detailing how the individual has turned from the organic in an attempt to construct tools and resources to overcome earthly constraints; yet, McHugh’s song always carries in the background, accompanying inevitable failures—“I will try four strings tuned in fifths to the sound of falling.”

With an almost omniscient prophesizing, McHugh states in “Seafaring to Tracheotomy,” the inaugural poem to Section Three, that “the origin of pain is in technology.” This moment is significant in that it is, perhaps, one of the clearest statements of the collection and also the most representative of McHugh’s American song. Throughout, McHugh’s language and imagery forces the reader to confront a society in flux—a place that has returned from and is going toward ending—and, in its lush detail, mirrors its own thematic representation of a return to nature. In a collection that relies heavily on its closely examined rumination, the third section is most representative of what lies ahead—the crescendo of McHugh’s song that magnifies how a country so focused on pitching forward into its own self-identified greatness will ultimately lead to its ruin: “There is no other way but belly-up, firm / through the lung,” writes McHugh in “Supply Notes from The Home Book of Taxidermy and Tanning,” “Music to leave the body / windblown. Grinding wheel, a gramophone.”

If we move past the contemporary beats and polished tracks of America’s present to part the deep curtain of history, we too may hear the lilting chords of McHugh’s cautionary Americana—that cold, isolated, animalistic place where “this ruin we enter / into—enters us, her bent knees. / Her lungs, oblique wings.” But, can our awareness halt the timeline that McHugh has so carefully laid out? Or, regardless, will we still arrive in a place where “The living are left to fend off whatever is wild, / and there is an endless sense that we are all on the verge of losing / something vital.”

Clare Paniccia is a first-year PhD student in poetry at Oklahoma State University. Her work has been featured in or is forthcoming from Best New Poets, Slippery Elm Literary Journal, Ruminate Magazine, and elsewhere.