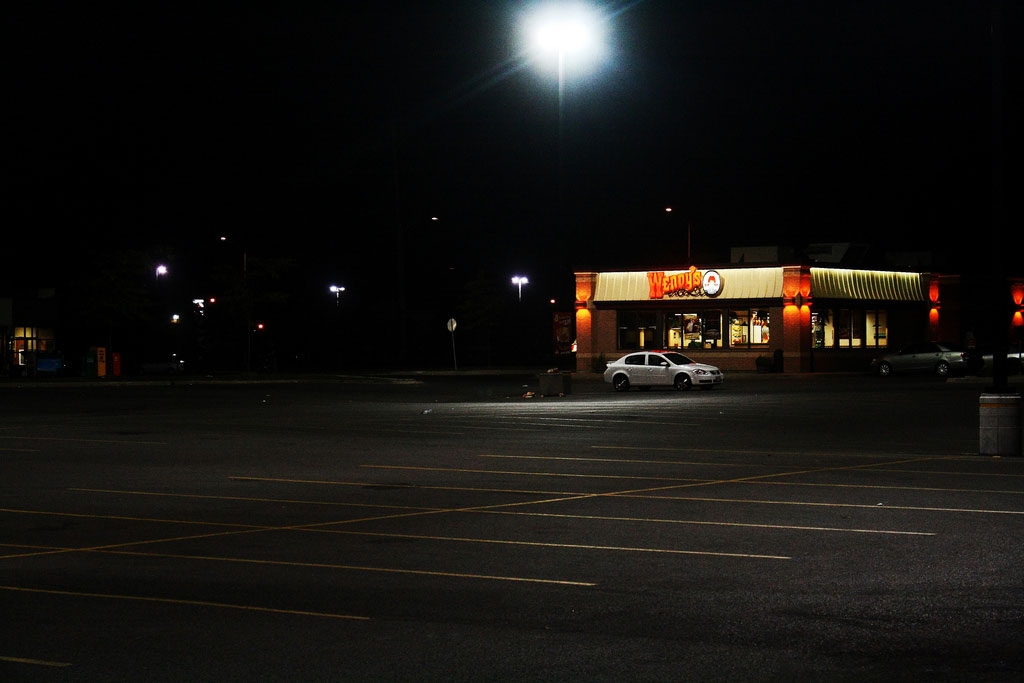 WHO’S IN CHARGE
by Shelley Blanton-Stroud

The dining room windows of Wendy’s Old Fashioned Hamburgers beam light onto the last cars in the lot—a pale-blue Pinto, a red Camaro, and a gray Buick Riviera, floorboard littered with Linda Ronstadt, Jackson Browne and Earth, Wind and Fire eight tracks. The Buick’s mine. I’m the manager. In two weeks I’ll quit to go back to college.

I squirt hospital-sweet cleanser over gluey catsup congealed onto the salad bar Formica, scraping with my finger through a rag. Then I head to the kitchen, snack on the last batch of fries and try to balance cash against receipts. Eighteen-year-old Fat Danny washes dishes and sixteen-year-old Nina mops.

Three times, I get the wrong total. Stupid, I say to the mirror on the door. My pale, freckled face looks back under a blue and white striped headscarf.

I hear Fat Danny drag garbage bins to the back door. He gets high with friends every night after work at the edge of the trickling Kern River, so he works fast now to get there. The garbage bin cage is behind our building, not out front, so Fat Danny ignores the warning taped on the back door—Take the garbage out the front door at closing! It’s about business and safety! I ignore his ignoring it because I’m not interested in business or safety.

He unlocks the back door, drags two bins out and props the door open with a bucket.

A minute later, Nina screams and I turn, annoyed.

He’s back, without the bins, dragged by two guys in black ski-masks. One holds a machete at Fat Danny’s throat. The other points a sawed-off shotgun at Nina, whose eyes are leaking, her mouth covered by a big hand.

Gun-boy’s knuckles are white, his ropy forearms dry and red.

Yesterday Nina noticed we were selling too many milkshakes. I tasted one, dense and sweet, like the gelato I’d discover five years later.

I served Fat Danny and Nina, who agreed it was amazing.

“You put the machine together wrong,” Nina explained, pointing to the metal piece lying against the backsplash. “That’s the part that pumps air into the mix. You’re not pumping air.” She raised her eyebrows. “This is pure, uncut milkshake.”

I scraped the last bit out of my cup. “It’s better this way.”

I said nothing more but Nina reassembled the machine, biting the tip of her tongue, concentrating, getting it right.

Gun Boy’s weapon moves up and down, side to side, like a sprinkler head. His Adam’s apple bobs below the mask.

“Not your money. Wendy’s money.” Fat Danny’s lips move oddly, in the wrong shapes, at a different pace than his words.

He has the same slight build and just-turning voice as Gary, a guy who’d sat next to me in the Algebra I class I nearly failed.

“Get it,” Gun Boy says, voice cracking on get.

“It’s in the safe. Do you want me to take you there now?”

“You want to come with me?”

“Come with you! Yeah!” He licks, then chews, his top lip and a half inch of mask.

We walk past two wide sinks, full of soapy mop water, a dripping onion-ringer and a laminated poster describing labor law in plain English. I ask, “Can I sit to open the safe?”

I do it, opening the safe and pulling out the zippered bag.

“I can hand it to you now.” My voice slows, eyebrows raise, like I’m speaking to a toddler.

When he holds out his right hand for the bag, the gun drops in his left. He wrenches it back up again. He stands, outstretched arms and shotgun jerking up and down, money-bag swinging below the gun. Everything is moving but me.

“We’ll go into the freezer. We’ll stay ten minutes. So you can get away.”

“Yeah, yeah,” Gun Boy says. He flicks his gun at Knife Boy, who opens the freezer door and pushes Fat Danny in.

I back into the freezer after her.

Gun boy’s blue eyes round through the holes in his mask.

He says, “Thanks,” almost exactly like Gary from Algebra.

I’ve never looked straight at him before. Even in the freezer, his forehead shines.

Fat Danny’s nose crinkles. He tries to stop a giggle but his shoulders shake, belly jiggling.

“You’ve never been much of a manager.”

“You were in charge tonight, though.” Fat Danny looks at me without blinking through smudged lenses.

I shiver, open the freezer door, and yell, “Hello,” protectively. I turn back. “The coast is clear.” 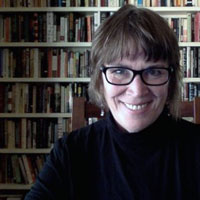 Shelley Blanton-Stroud teaches college composition in Northern California. Her stories appear in Brevity Blog, Eunoia Review, Mamalode and, forthcoming, in Soundings Review. She has brought pieces of her novel-in-progress to Bread Loaf, Napa and Squaw Valley writing conferences, where nice people have tried to teach her how to be a fiction writer.