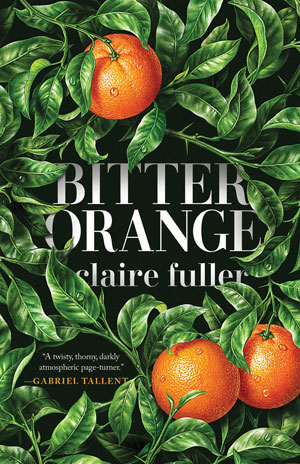 Part of the pleasure in following an author, as I have followed Claire Fuller from her first novel to her latest, Bitter Orange, is coming to recognize her voice, even without a title page. Our Endless Numbered Days and Swimming Lessons introduced me to Fuller’s eerie, ironically rendered English countryside of dark forests and haunted seaside villages, and to her characters held captive by lies. From novel to novel I’ve admired how she uses intelligent but naïve narrators to withhold information from the reader, sustaining unnerving suspense while signaling dissonance beneath the well-mannered surface. At this point, I’ll eagerly read anything she writes. And Bitter Orange is her best book yet.

Fuller had me at the novel’s first line, narrated by Frances Jellico: “They must think I don’t have long left because today they allow the vicar in.” The vicar is actually her old friend Victor, not a chaplain but disguised in his “dog collar” to gain admission and to ask: What really happened at the countryside estate she shared with a mysterious couple twenty years before, in the summer of 1969?

As the dying Frances wastes away physically and mentally, she hints at her own culpability in the crime she recounts:

More images come then, one superimposed on the next. And I abandon chronology in favour of waves of memory, overlapping and merging. My final look through the judas hole: I am kneeling on the bare boards of my attic bathroom at Lyntons, one eye pressed to the lens that sticks up from the floor, a hand covering the other to keep it closed. In the room below mine, a body lies in the pinking bathwater, the open eyes staring up at me for too long. The floor is puddled and the shine of wet footprints leading away is already disappearing. I am a voyeur, the person who stands at the police tape watching someone’s life unravel, I am in the car slowing beside the accident but not stopping, I am the perpetrator returning to the scene of the crime. I am the lone mourner.

Frances’s story—and her adult life—begins that summer, at age thirty-nine, when her mother’s death liberates her from caregiving. She moves from their London flat to Lyntons, hired by the American owner, Mr. Liebermann, to assess the estate’s “items of architectural interest.” Liebermann has read Frances’s article on Palladian bridges in “an obscure periodical read…by probably only a half dozen academics,” and he flatters her by seeking her expertise. In truth, she is an amateur, with one year at Oxford and the rest of her education earned at the British Museum library, where she learns to place more faith in the published views of academics than in what she sees with her own eyes.

From novel to novel I’ve admired how she uses intelligent but naïve narrators to withhold information from the reader, sustaining unnerving suspense while signaling dissonance beneath the well-mannered surface. At this point, I’ll eagerly read anything she writes. And Bitter Orange is her best book yet.

Settling into a room last occupied by the late (and last) Dorothea Lynton, she unpacks her luggage, an odd haul including her deceased mother’s undergarments, old-fashioned evening dress and, it seems, an as-yet untested mental list of parental rules. As she rips out the old, reeking carpet in her bathroom, Frances discovers a peephole in the floorboards, offering an irresistible view of Peter and Cara, who are at Lyntons to report on its condition and contents to assess market value. Spying opens Frances to more transgressions; she witnesses, then joins, the couple filching bottles from the wine cellar and “flogging” other items unlisted in the inventory. 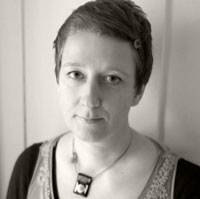 Peter justifies these thefts as protection against the owner’s plan to sell any “interesting” items they find to American collectors. There is historic basis for his suspicions; during WWII, Lyntons was requisitioned by an American regiment and robbed of family heirlooms. Frances’s acquiescence would be inexplicable—without the clarifying context of her own secret acts of reparation: ruthlessly offloading most of her mother’s things and clandestinely burying a fur stole left to her by an aunt whose affair with her father caused her parents’ divorce.

As Peter and Frances tour the mildewed library, eyeing the warped books and buckling shelves as deathwatch beetles click within the walls, they speak to the different ways of valuing objects, as treasures or as transactions. He says, “I see a room which needs repairing, or ripping out and starting again. You and Cara see antiquity and beauty. The more something’s falling down, the more you bloody like it. Both of you are always looking backwards, when you should be looking forwards to the future.” Frances replies, “But everything we have, everything we are, is created by the past.”

Frances’s social and sexual inexperience, combined with her desire to belong, makes her the perfect foil. Soon she’s sharing every meal with the couple, neglecting her report to flirt with Peter or serve as the audience for Cara’s implausible stories. Their biographies are full of holes, their provenance confusing. Cara wears a wedding ring, but Peter is married to someone else. Raised in Ireland, Cara speaks convincing Italian and cooks pasta with authentic ingredients she has shipped to the estate. A baby boy they avoid discussing was conceived and lost under mysterious circumstances. Is Cara crazy with grief? Does Peter take care—or advantage—of Cara? Fuller’s genius for page-turning plot means the reader can’t begin to get the story straight until she reaches the end of the book.

But Fuller’s keen psychological insight is, for me, what distinguishes her voice on the page. She furnishes Bitter Orange with intriguing events, but frames it with deep understanding of the complexity of human behavior. She draws her characters so meticulously that, when the trio discovers a “museum” of Lynton family antiques stashed in the house’s orangerie, we already know what Frances will do. And we know her well enough to fear that her habitual submission to authority will ultimately convict her of the crime she’s witnessed—as recompense for another she’s concealed.

Elizabeth Mosier logged 1,000 volunteer hours processing colonial-era artifacts at Philadelphia’s Independence National Historical Park Archeology Laboratory to write Excavating Memory: Archaeology and Home (forthcoming from New Rivers Press in 2019). A graduate of Bryn Mawr College and the MFA Program for Writers at Warren Wilson College, her nonfiction has been selected as notable in Best American Essays and appears widely in journals and newspapers including Cleaver, Creative Nonfiction, and The Philadelphia Inquirer. She writes the “Intersections” column for the Bryn Mawr Alumnae Bulletin. Read more at www.ElizabethMosier.com.