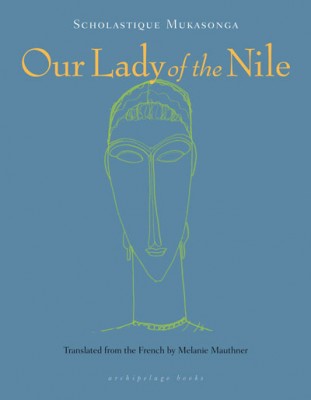 OUR LADY OF THE NILE
by Scholastique Mukasonga
Archipelago Books, 244 pages
translated from the French by Melanie Mauthner

This is how Scholastique Mukasonga’s Our Lady of the Nile ends, in 1979:

You remember what they used to tell us in catechism: God roams the world, all day long, but every evening He returns home to Rwanda. Well, while God was traveling, Death took his place, and when He returned, She slammed the door in his face. Death established her reign over Rwanda. She has a plan: she’s determined to see it through to the end.

She does, in fact. In 1994, ethnic hatred erupted into political terror and Hutu militants wiped out some 800,000 Tutsi people along their Hutu allies. This is the part of the history of Rwanda, a tiny East African nation squeezed between Burundi and Uganda, between colonialism and corruption, that we remember. For most of us the genocide was unfathomable and worse, a distant horror, another strange interruption of the Clinton years.

Here, in this slender, deceptively fast-paced novel, Mukasonga, who fled Rwanda before genocide, explores everything leading up to it: ethnic rivalry, resentment, hatred, the quota system that limited Tutsi participation in society and that was payback for centuries of Tutsi control, and the role of the Germans and Belgians and the Catholic church in creating the conditions that led to horror. Mukasonga’s three memoirs of the genocide, which claimed 27 members of her Tutsi family, and of the family’s forced exile before it, were published in France by Gallimard. This novel, studiously translated by Melanie Mauthner, a British writer and poet, won various French literary awards, including the Renaudot Prize, in 2012. 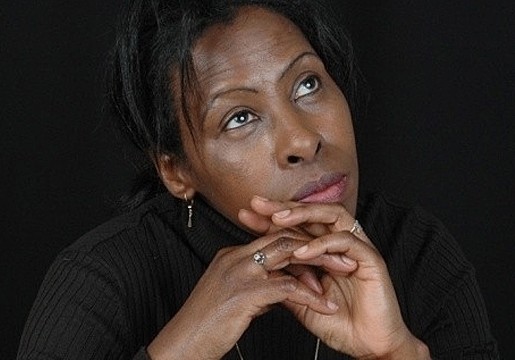 Our Lady of the Nile is a product of profound understanding of Rwanda, knowledge and feeling, manifest in the collection of students at the lycée, in the tensions that quietly spill out across the school—quietly and then in a rush, as Mukasonga must know well. This is the reader’s prize. The prose has a dry objectivity to it, wry and weary, but also cheerful and warm. A few times, Mukasonga translates her country into poetry, for of course love and disappointment are at the heart of the endeavor. Listen: “For many months, rain becomes the Sovereign of Rwanda,”

a far greater ruler than the former King or the current President…Rain, the good omen of a fertile marriage. First rains, at the end of the dry season, making children dance as they turn their faces skyward to receive the fat drops for which they’ve longed. Shameless rain, revealing the budding curves of all young women beneath their drenched wraparounds. Violent, capricious, punctilious Mistress, pitter-pattering on every sheet-metal roof, on those sheltering in the banana groves or in the muddy neighborhoods of the capital. She who casts her net over the lake, and diminishes the volcanoes’ hugeness; she who reigns over the vast forests of the Congo, the very guts if Africa. Rain, endless Rain, unto the oceans that bore her.

Our Lady of the Nile is an elite Catholic high school for girls. Four stories, looming over a mountain lake at the supposed source of the Nile (“A steep path brings you to a heap of rocks where the rivulet spurts between two stones”), the building is more imposing than the capital in Kigali. It’s ruled over—in French and only French—by the white Mother Superior and her ministers, including the misogynist Father Hermenénégilde. The school, of course, was intentionally placed in the mountains so that the girls would be safe from threatening eyes. Mukasonga indeed takes pleasure in pointing out the trail of contradictions that lines the girls’ lives.

They’re not hard to come by. The Hutu, “the people of the hoe,” are the only true Rwandans, they say. Their moral and political authority derives from this humble origin (traditionally, the Tutsi were the people of the cattle, which gave them authority over the people of the hoe) and yet these are elite girls: they value skin whitening cream and fast cars (and the men who drive them). Their fathers, generals and top businessmen and politicians, pursue policies to further subjugate Tutsis, mimicking the similar policies invented by the hated Belgians. Supposedly top students, few of the girls care about their studies; they’re on the hunt for powerful husbands. Apparently loving Catholics and models of Christian behavior, and certainly not backward paganists—traditional religion always a looming threat—they are a catty bunch.

Perhaps not unlike any group of teenagers. But the Hutu-Tutsi ethnic divide colors everything. In the course of the school year 1978-79, which we observe here, it comes to colonize the girls’ minds. On day one, here is Gloriosa, big boned and virulent in support of the Hutu cause. “Two Tutsi for twenty pupils is the quota, and because of that I know some real Rwandan girls of the majority people, the people of the hoe, friends of mine, who didn’t get a place in high school. As my father likes to tell me, we’ll really have to get rid of these quotas one day, it’s a Belgian thing!”

The two objects of Gloriosa’s wrath are the Tutsi girls Veronica and Virginia. It’s Virginia speaking at the top of this review—presumably her perspective overlaps with Mukasonga’s. The year begins with cautious optimism, uneasy peace. Gloriosa hugs Veronica and Virginia—“the tighter you embrace those snakes, the more you suffocate them,” she says. Veronica is wary. In perhaps the most beguiling chapter of the book, Virginia seeks protection from ancient spirits. But what can stop the chaos to come?