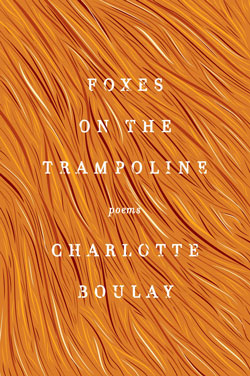 FOXES ON THE TRAMPOLINE
by Charlotte Boulay
Ecco Press, 64 pages

You are in a field, a forest, or on a shore; you may have never been here before, but it brings forth some immense longing. Until last summer I had never been to the prairie, but it is strange how I miss it now—I miss its monolithic emptiness, and how it made me feel like a tiny monolith myself.

We miss something or someone because we feel we belong there or with them. The speakers of Charlotte Boulay’s debut poetry collection, Foxes on the Trampoline, feel their selves or their emotions belong in or to other, natural beings. Boulay articulates this longing through natural imagery—though not as descriptions, as per the nature poem’s tradition, but as part and parcel of the human experience, juxtaposed to want, love, and loss. Take “Senza,” (Italian for “without”) from Part One of the collection: 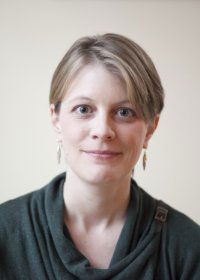 While these lines depict a man possessing animals as objects, the second line of “Senza” embodies Boulay’s unique employment of nature imagery: no longer as object but subject; joined with Jane on the same line, the “cage-raised foxes” come to stand for Jane’s trapped self. Further down the poem, the speaker remarks on a boy’s encounter with a balloon:

A boy tests the pull of the string,
lets it tug his arm to the sky, realizes

everything that can run wants to

Here, the human experience mingles with animal experience—Jane, the boy, and the foxes experience the same want, the same trappings, which are manmade trappings. Consider the collection’s eponymous penultimate poem, “Foxes on the Trampoline.” The speaker begins the poem as a voyeur watching foxes from the window, first in reverie and then in reflection:

They look too skinny, they need

to steal a chicken, or perhaps I could
put out some milk and bread—no. What is this,
some kind of story?

Challenging humanity’s impulse to transform nature, Boulay in turn indicates art’s traditionally enslaving relationship with depicting nature; that no matter art’s legacy with nature, the natural world has not chosen to become the backdrop to mankind’s “story,” that humans are interlopers:

I would never tell them I am watching them
pretend to fly; trespassers, all of us,
of this easy, weightless secret.

This forces the reader to consider poetry formally, and its space within nature. By using poetry, an art of constraints, Boulay illustrates our every day constraints, and our human impulse to constrain. Boulay’s constraint of choice is the lyrical I. Like Louise Glück’s The Wild Iris before her, Boulay’s natural world speaks for the I (and vice versa); however, unlike Glück, Boulay does not erase the I but turns it into a relay of consciousness between selves, the reader, the sea, and animals alike.

And it is lyrical. The final lines of “Foxes on the Trampoline” join the human and the animal, as Boulay laments:

After nearly an entire collection of poems illustrating the human experience through nature, the speaker inquires of the fox joy. This moment directs the reader’s attention inward, away from the invaded natural landscape and instead to human constructions—the question itself concerning the fault in our direction.

Foxes on the Trampoline’s largest constraint is a three-part arc. As Westerners, the three-part arc is part of our consciousness. From fiction to theater, it is the most intuitive storytelling construction; however, this is not always to be expected of poetry collections. Thus, when opening Foxes, one immediately notices this three-part distinction. The parts seem to grow into each other, that is, from wanting to having to losing.

Appropriately, a common theme of Part One is the self’s adolescence; in “Senza” a child learns want, and “Boys of My Youth” recalls the early pangs of sexuality through the lens of caring for horses.

Part Two begins and ends with a sailor. Now an experienced lover, the speaker “invented another” to forget a lost lover, and by the end of Two the speaker has left love behind (as much as possible).

Despite these themes, each part wades in and out of various moods and temperaments, much like the poems’ darting verse paragraphs and caesuras. Poems like “CPR #1” and “CPR #2” of Part Three, and the sailor of Part Two, serve as recurring motifs to give the reader a complete perspective on the poems coming before and after them.

And herein lies the beautiful irony of Foxes on the Trampoline: that there is beauty in restraint. Internal rhyme abounds in this collection; the lines and indentations are purposeful and necessary to the rhythm and music of its lyrics—Boulay uses trappings to illuminate the beauties and travesties of the trappings of life, as built by humanity.

Matthew Girolami is a poet from New Jersey. His work appears in the Susquehanna Review. He is a graduate of Franklin & Marshall College, where he was Arts & Entertainment Editor of The College Reporter.