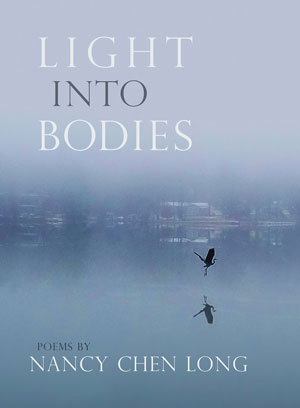 LIGHT INTO BODIES
by Nancy Chen Long
The University of Tampa Press, 99 pages

The poetry of Light into Bodies begins and ends with a theme of identity while its pages flutter with the imagery of egrets, pigeons, swans, and starlings. Nancy Chen Long presents the complexity of exploring identity from multiple perspectives—from the viewpoint of a mathematician, from a child whose mother repeatedly becomes the property of other men by the “generosity” of her own father, to a daughter’s experiences growing up in a multi-cultural home and discovering the nuances of relationships in adulthood. The poems stitch together an intricate lace of childhood memories, family stories, myth, and Asian-American experience with a thread of women’s issues intertwined throughout, each conflict woven within the next to create the speaker’s complicated identity.

Light into Bodies was published by University of Tampa Press as the winner of their 2016 Tampa Review Prize for Poetry. The press was founded in 1952 and launched its literary journal UT Poetry Review in 1964, which evolved into Tampa Review in 1988. The book’s perfect-bound, matte cover features a beautiful photograph also taken by Chen Long, who collaborated with the press for the cover design.

This collection is the first full-length book of poems by Chen Long, as well recipient of a National Endowment of the Arts Creative Writing Fellowship in Poetry. In addition, she has a published chapbook Clouds as Inkblots for the War Prone (Red Bird Chapbooks, 2013) and her poetry has appeared in many literary magazines and journals, including Ninth Letter, Crab Orchard Review, Zone 3, Briar Cliff Review, Alaska Quarterly Review, Pleiades, Bat City Review, the Anthology of Contemporary Indiana Writers, and elsewhere.

The poems within are personal—to the point of memoir in their detailed narratives, but also rich in imagery and lyrical language. In “Saving My Mother” readers are drawn into the family background of the speaker, her mother’s patriarchal and abusive upbringing, as well as her mother’s strength and resistance: “. . . My father was good for / giving, my mother would say, so generous with his property, / which is how she repeatedly came to be the property / of another man.” The poem continues in a later stanza: “When she refused to work, the man himself would occasionally / return her, the way one might return // a defective plough.”

There’s an undertone of feminism in several of the poems. These lines from “Handiwork, or My Mother, Had She Not Married My Father” are particularly striking:

I’d pretend she’d have other options

for escape as she mulled over
her sister’s dislocated jaw, ribs cracked
at the hands of their father
for loving a man not of his choosing.

The narratives cover a broad timeline—from the mother’s childhood, to the speaker’s own during the Vietnam war, and into then into adult life with more modern references, such as using the verb google and all the idiosyncrasies of travel in the poem “Gonga.” Chen Long effortlessly provides a variety of forms mixed in with free verse, such as prose poems, haibun (a combination of a prose poem followed by a haiku), and tanka. Some of these poems are lighthearted, almost humorous, like “How She First Discovered Sex” with its surprising twist on childhood ritual or “What Some Things Are Worth According to Her Grandfather” which cleverly ties together a listing of common American clichés in a rather rhythmic way.

Other poems reach deeply into the need to escape, even contemplate death, while some find a different way to escape via surrealistic daydreams. For example, in the poem “Hold on Lightly” Chen Long writes:

and tumblers tumbled.
Even today, her grip

on reality—
feather-light. You can pull

it away from her
with the softest tug. 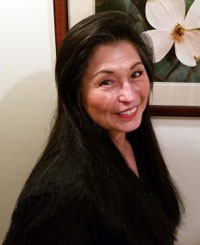 There seems to be not only the seeking of identity, but also a longing or searching for home throughout the collection along with a common theme of stunning imagery of birds. In “Murmuration,” the speaker seems to see her own complexity in the starlings as the prose poem ends vividly:

One lands so close, a bird about nine-inches long. After all the black, my eyes are startled by such color: a yellow-tipped beak, an eerie green that shimmers off of feathers soft around the head and throat, an opaling-purple sheen along the body, torso-feathers dipped in white, wing-feathers outlined in bronze—and those legs, those very sturdy red legs.

The poem pairs well with the opposing page and the surrealism of “Wingspan,” in which we seem to catch a meta-glimpse of Chen Long herself, as the speaker describes how “a pigeon will mistake me / for an electrical wire, perch long enough // for me to seize its spindly feathers, / attach a message, set it free.” I’d like to think of those messages as the very poems that grace the pages of this beautifully finished book.

I enjoyed every moment I spent with these poems on a not-too-hot August afternoon in the shade of backyard trees with sounds of birds and wildlife as the soundtrack. Chen Long’s poems are of history and myth, feminists and patriarchs, family and childhood, and the flight and wingspan of poetry itself.

A Pushcart-nominated poet, Trish Hopkinson has been published in several anthologies and journals, including Stirring, Pretty Owl Poetry, and The Penn Review; and her third chapbook Footnote was published by Lithic Press in 2017. Hopkinson is co-founder of a regional poetry group, Rock Canyon Poets, and Editor-in-Chief of the group’s annual poetry anthology entitled Orogeny. You can follow Hopkinson on her blog where she shares information on how to write, publish, and participate in the greater poetry community at http://trishhopkinson.com/.