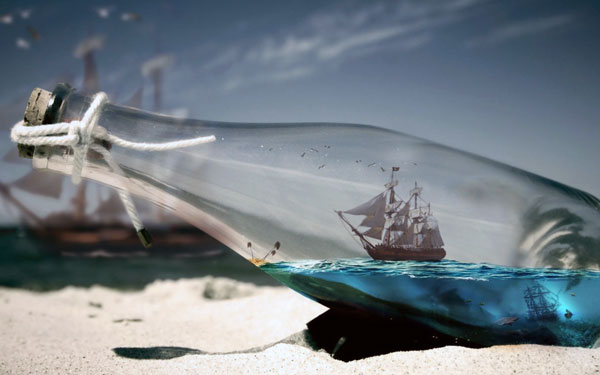 Two figures sit on the bamboo gangplank jutting off a model pirate ship.

A man and a woman. They aren’t quite to-scale, and slightly over-sized as they are, they can’t explore the cabin space below or stand lookout in the crow’s nest. So they dangle their legs over blue-green silicone that feigns at ocean waves beneath them. Their relationship is more fragile now, contained in glass, than it’s ever been before. She’s a wide-eyed citizen of the world—packs a light suitcase, counts passport stamps—and he’s just grateful to have found a way to get out of town without ever having to leave it.

Time feels different inside a bottle, on a ship, at sea. There’s no telling how long they’ve been inside.

“Balmy,” Faye had said when she first arrived. She emerged through the bottleneck, jumping with two feet onto the hardened-putty ocean. Lance sealed the entrance quickly behind her—he’d grown accustomed to the quiet—gripping the cork like the wheel of a car as he guided it back into place.

He walked Faye across the sea to his pride and joy, his masts and sails.

Faye had held back and appraised the taut green sails, the cannon mouths, the sterile, artificial little barnacles affixed to the hull, before squatting down and propping her forearms on her thighs. A thinking pose, first, and then, a decision. “I think I like ‘em better sunk,” she said.

Lance shook his head. “You archaeologists. You like a ruin more than anything.”

Faye stood up again and played like a tightrope walker on the solid sea, her arms cast out from her shoulders. “Has all this walking on water given you a Christ complex?” she teased.

“I grew up ice fishing,” Lance reminded her. “Walking on water’s nothing new to me.”

When they reached the ship, Lance tossed Faye a rope ladder and said, “But you know, a bottled ship is more or less a sunken one.”

Faye put a foot on the lowest rung. “Because neither one’s going anywhere.”

Lance nodded and they clambered up onto deck.

There’s a certain puppetry in the assembly of these models. Sometimes they call them impossible ships. You slide the pieces in, tissue sails, thread, whittled wood, and you tug them into place from the outside using little tweezers, hooks, needles, and string. You pry and prod until it’s something you’re proud of, and then the cork goes into place.

“It’s sturdier than you’d think,” Lance had assured Faye as he patted a mast. She’d responded too readily, “That’s what I’m afraid of.” And for a while they pretended not to hear each other.

They fashioned hammocks from fishing nets. They stole scraps from the sails, folded them into paper cranes, and arranged a flightless flock along the rails of the ship. They cut string on their teeth and made the kinds of bracelets that kids make at camp. They scaled the masts, danced from bow to stern, and sprawled on the hard water beneath the bowsprit. There, they bathed in sunlight that passed through windowpane first, and then bottle glass, before it reached their skin.

They’re telling stories to each other. They’re laughing.

Then Lance asks Faye if she’s still seeing Mark. Faye asks Lance in return if he’s decided to go back and finish school.

No room for secrets within glass.

Up on deck, Lance is compelled to confess to more. He isn’t leaving the boat-in-a-bottle he says. Not now. Not ever.

“Of course you’re going to leave,” Faye says, dragging her thumb across the lacquered gangplank.

Lance crosses the ship and leans against the starboard rails. He examines the glass perimeter, cleans his fingernails, crosses one foot over the other. Then he turns to find Faye at the captain’s wheel.

“We could try long distance if you wanted,” he says.

Faye grabs the wheel spokes. She likes having something to do with her hands, to ground her thoughts.

“What is this, Lance? Why’d you invite me here?”

“I’m ready to settle down, Faye, whether you are or not.”

“But here?” Faye asks. She glances past the glass enclosure at the looming office bookshelf outside it. Then she gives the wheel in her hands a spin. She wishes that the wood were splintered, dusty.

“You could stay here with me,” Lance adds, uncertainly.

Faye’s hair is braided, like the ship’s figurehead’s, and in her anger she feels as stiff as that mermaid with her carved chest strained toward the sea.

Faye marches across the deck and says, “I know a thing or two about escape, and you’re doing it wrong, Lance.”

Then she’s down the rope ladder and across the sea, one foot after the other, one last time.

Her shoulders are already starting to feel too large for the bottleneck as Faye passes through it. With her feet back on hardwood, she drives the cork into the bottle with the heel of her hand, and she lifts the bottle to her face.

Lance is lounging on the gangplank with a fishing pole.

Faye avoids his eyes, and lets her own rove the ship deck. “Eleven sails to take you nowhere.” She can’t hear what he’s saying, and she doesn’t care anymore, not really, but on the other side of the glass, Lance replies, “Eleven sails isn’t anything more or less than I want.”

He likes how still the sails are, how they don’t need the wind to get anywhere because they’re already exactly where they ought to be.

Faye’s at a dig, in a valley that used to be a sea long ago, but maybe not as long ago as you’d think.

She’s crouching with her forearms on her thighs when she dredges an old copper coin from the earth. It’s a nice find. Good condition. Whole.

But it’s facedown in the dirt, and Faye has to remove it with her brush and her pick. She blows air out her cheeks to clear the dust, and she pries the piece free, wipes it clean against her chest. It’s late, neither day nor night, so she holds the coin out of the shade and into what soft sunlight is left in the valley. That’s the light she first sees the coin’s kingly profile in. His face is so clearly hewn in the metal, like new.

Faye’s still holding the coin when she takes her seat on the bus at the end of the day, bound for the hotel.

She rests her ponytail against the window and sets her boots on the seat across the aisle, one heel balancing on the other’s toe, and the artifact is on her stomach. She studies it. It’s been still for so long now, for centuries, and it’s moving now. Down the dusty road and up the mountain, but it’ll be in a museum exhibit with others like it soon enough.

It’s funny, but lots of things just end up behind glass, and that’s how we learn from them. 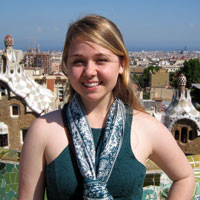 Erin Peraza is a Philadelphia-based writer of short fiction and screenplays. She has had an artist/writer collaboration published in Symbiosis Magazine, and her story “On a Whale Watch, Sober” won second place in the 2014 Phi Kappa Sigma Prize. She was also featured in the Emerging Philadelphia Writers program of LIVE at the Writers House. Erin is currently working on her fiction portfolio, while she works and eats at the Kelly Writers House at the University of Pennsylvania.