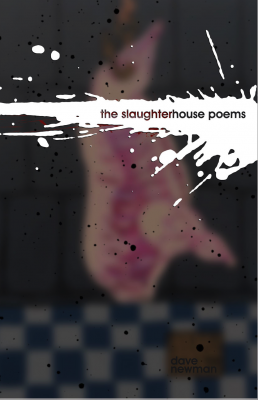 Dave Newman’s The Slaughterhouse Poems is a book about work and failure and desperation, about the ways we escape and survive and the things we do when we’re lost in the vastness of youth and sore afraid of the vastness of age. The speaker of these poems—which are all set in Western Pennsylvania between 1986 and 1989—is looking back on his days as a high school fuck-up who has just taken a part-time job at a slaughterhouse. A wide cast of characters surrounds him: slaughterhouse employees (one who is famous for juggling cow balls and ultimately gets fired for fucking a three hundred pound pig), buddies, girls he’s after, dive bar regulars, a 91-year-old bowling alley owner, too-young strippers, old men who sit on their porches with cans of Schaefer beer, and drug dealers. The book has five parts, each beginning with an italicized section from one of the poems in that part. This serves to unify the individual sections and to thread together themes that web their way through the entire book. The first italicized line, excerpted from “Jackson Pollock Could Have Saved Our Lives,” sets the tone: “We believe too much in the singularity / of our own terrible hearts.”

Early in the book, the speaker marvels at the nightmare of the slaughterhouse. He sees a man “take a knife to a squealing pig’s throat” and pauses to consider “dead cows the size of small cars” hanging from steel chains on the killing floor. His senses are assaulted. In “The Man with the Long Silver Blade,” he talks to a meat cutter who smells, from three feet away, strongly of whiskey. Later, when that same man touches him on the shoulder, the speaker smells “dead cigarettes” on his fingers. A sausage machine, gears wailing, spits ground meat into pig guts, and everything smells of “red peppers and vomit / fennel and black pepper, dried blood and bleach.” In “The Horroriest Horror Flick Ever,” the speaker recalls seeing “pigs / getting hammered across the face.” He continues: “I saw horror in the slaughterhouse: / grown men with knives and saws / lopping off various parts / of various animals.” One guy, laughing, asks if he’s ever eaten “cow cock” and then tosses “a bloody dick / like some horrible space worm / through the air so it landed / at my feet and shriveled.”

But the book is not all about what a horror show the slaughterhouse is. It’s about a kid fumbling around, trying to find his way in the world. “It was summer and I hated work / but all my scams lacked distance,” the speaker says in “Smash It Up.” The plans he makes with his friends “sounded like space travel,” and the whiskey they drank “barely hit / but still felt like possibility.” In “The Horroriest Horror Flick Ever,” again thinking about pigs getting thumped in the snout with a hammer, he tells us that “death is barely death when you’re a teenager,” and it’s a line that lights up the book’s preoccupations with the errors and terrors of being young and being dumb and living only in the awful presentness of the present.

In “Plumpy Threw Up,” about a wrestler trying to make weight, the speaker says: “You can only destroy your health so much / at 16 and a half / with exercise and diet / before better forms of destruction call.” Newman is so good at capturing that feeling of being a kid on the ropes caught between a future he doesn’t want and a dream he doesn’t quite know. The speaker continues: “Being young is a miracle: / you spend all day / in the dirt / with a shovel / and the world / refuses your grave.” Owen, the ancient owner of a bowling alley in town, stands in direct contrast to the book’s younger figures. If the speaker displays nostalgia for a time that’s gone, a certain kind of Americanness that’s disappeared, Owen longs for a time before that. “What kind of a shitty country are we living in that / bowling is too expensive?” he asks in “Owen, the Owner of the Bowling Alley, is 91 Years Old.” Owen’s brokenness and his willingness to accept the brokenness around him exemplifies the sort of hardened wisdom the speaker, telling us these stories as an older man, can appreciate. In “Owen, 91 Years Old and Worried, Heads Out,” Owen visits a young girl who used to work for him at the bowling alley and is now auditioning to be a stripper. He wants to help her. But, sitting in the strip club watching her, all he can do is give her money and hope that the creepy men in the club don’t try to steal it from her. And then he wonders if he’s ever been a creep. He concludes: “Being a creep was not so hard to.” It’s such a sad and wonderful realization for an old man at the end of his life to have. It feels like a beginning.

The Bukowski influence runs deep in Newman’s poetry but not in a way that’s derivative. In fact, Newman breathes new life into a form that, in lesser hands, could easily slide into self-indulgence. I’d forgotten what it felt like to read poetry with this sort of intensity, to burn through a collection in an hour and then flip back to the beginning and start again. It’s the same feeling I had when, buried in the stacks as a freshman in college, I read Mockingbird Wish Me Luck with a sort of drunken ferocity. The world closed around me. The book was the world.

Early in The Slaughterhouse Poems, the speaker dismisses the work of Jackson Pollock and tells us: “The representations I like best / are the representations that still resemble / people in crisis and the places they go / to save and/or destroy themselves.” And that’s what Newman gives us here: real characters in moments of crisis, fighting or giving in. In “A Line of Poetry” and “Stacey Never Promised Me a Rodeo Championship,” the speaker recalls his discovery that poems don’t have to be about flowers, that they can be about bad part-time jobs and factories, a discovery which opens everything up for him. I hope this book winds up in the stacks or a bookstore somewhere and that some hardcase kid, a kid who didn’t know you could write “directly and honestly and in detail,” finds it and takes it home and lets it build him. Newman is writing to help that kid. 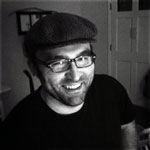 William Boyle is from Brooklyn, NY and lives in Oxford, MS. His writing has appeared in The Rumpus, L.A. Review of Books, Salon, Hobart, and other magazines and journals. His first novel, Gravesend, is forthcoming from Broken River Books.