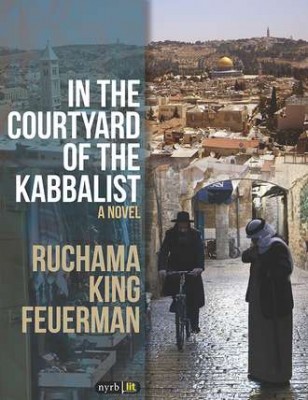 IN THE COURTYARD OF THE KABBALIST
by Ruchama King Feuerman
NYRBLit (e-book only), 203 pages

As I was crossing the street just outside the Jaffa Gate of the Old City of Jerusalem one evening this summer, I noticed a Palestinian boy, about 15 years old, flying a kite on the corner. It was about seven and the sun had disappeared already. The light was pink. The sky in the distance was a cloudless blue, but it seemed, at dusk, to have the texture of felt. An orthodox Jewish mother, wearing a headscarf and long skirt, came across to the traffic island, where the boy in capris and a t-shirt stood watching his kite fly over the honeycomb colored wall of the old city. The woman pushed a stroller, inside of which sat a nicely dressed boy of two. He was interested in the kite. 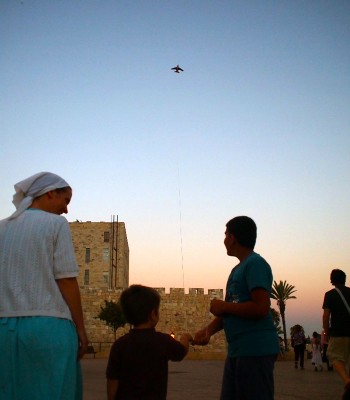 The older boy immediately noticed the little boy’s gaze; he gestured to him and the mother let him out of the stroller. She smiled with delight as the Palestinian boy held out the kite handle and the two boys held on together, the older one keeping a casual eye on the kite, tugging and guiding, the younger one concentrating hard on the string.

The kite was a momentary gift—a child’s toy, after all—in a place that so rarely seems to allow any give.

Ruchama King Feuerman proffers a similar kind of gift—or two of them rather—in her second novel, In the Courtyard of the Kabbalist, which will be published September 17 by the New York Review of Book’s new e-book only press NYRB Lit. (The press’s publishing strategy is to eventually publish print editions of books that sell well in the electronic edition. I printed a PDF copy of the book.)  The book tells the intersecting stories of Isaac Markowitz, an orthodox Jew who moved to Jerusalem from New York as a forty year old, and Mustafa, a janitor at the Dome of the Rock, the Muslim Holy site in the Old City above the Western Wall that includes the monumental Al-Aqsa Mosque. Both men are nominally believers and both suffer from a physical ailment: Markowitz from terrible psoriasis and Mustafa (whose last name is never given) from a birth defect that left his head permanently turned, facing over his right shoulder.

The pained men’s lives cross when Mustafa discovers Isaac, with his long beard and black coat and hat, walking through the Arab Quarter. He wonders what a religious Jew would be doing there. “Aren’t you frightened?” he asks. The uneducated Mustafa is guileless, but so is Isaac.

“Should I be?” he responds.

Isaac praises Mustafa for doing God’s work by keeping the site—holy to Jews who believe it was the place where God commanded Abraham to sacrifice Isaac and to Muslims as site of Mohammed’s rise to Paradise—“clean and wonderful.” So whose site is it? Jews claim a history on the “Temple Mount” dating to the first Temple period of King David. Muslims claim the place was made holy only by Mohammed; they deny a Jewish presence there.

This is the heart of the issue, of course. Whose holiness matters? Whose claim on the land is longer, more lasting, more vital? Whose God is best? These most vexing of questions, which trap otherwise smart and even liberal-minded people in boxes they can’t seem to get themselves out of, emerge from this one spot in this one city.

But what if, Feuerman wonders, a Muslim would offer irrefutable evidence of the Jewish presence on the mount? And what if a religious Jew would open his heart to save the life (and soul, presumably) of the Muslim? Could the boxes be broken?

What if the answers lie right beneath our feet?

Feuerman asks these most delectable questions in the form of a fable (the form, it seems, dictated by the place and the subject), infected, like the novels of Meir Shalev, with a kind of Jewish mystical magical realism. She is a wonderfully empathetic and perceptive writer sensitive to the psychology of people particularly who choose to move to Israel. “I’d be riding on the bus or walking along Jaffa Road, and I’d feel the most amazing sensation,” says Isaac. “That I was fulfilling my destiny—not only my personal destiny, but God’s plan for the Jewish People. It’s an extraordinary feeling.”

She delivers a nuanced portrait too of Mustafa, with his bent neck, according to his own mother some kind of curse from God; and she is equally clear eyed about religious fanatics on both sides. But it’s the operators, those who “live out these problems, in the real world,” “while all of you hide behind your Torah books,” she interestingly scorns most.

When Mustafa discovers a piece of pottery—a pomegranate carving that had been the head of a cane or staff used for religious activities during the First or Second Temple periods—he gives it to Isaac. A gift, like the handle of the kite. This one, however, is deeply subversive, for it’s “proof to the ones who say our temple didn’t exist.” Mustafa immediately regrets his gift and the rest of the fable follows the characters as they try look over the edges of the boxes that trap them, recoil, and press ahead to the most dangerous ledge, right to the very end.

Feuerman is masterful in directing plot and manages, under very challenging circumstances, to avoid turning her characters, which include the orthodox Rebbe Yehuda, the Kabbalist, into cartoons. And she is careful to try, somewhat unsuccessfully, to give equal treatment to Jews and Muslims. Among the imbalances, even in this carefully calibrated book, Feuerman fails to deliver a sympathetic Muslim analog to the kind and open-minded Rebbe.

But as a novel about people trapped by religion and history, it too is trapped by the form of the fable. The characters, though well-conceived, can’t evolve past the limits of the book’s architecture, which makes the story feel like it isn’t quite fully imagined. The cost is the power of the ultimate tragedy; what ought to feel terribly melancholic is delivered with a wink and a nod.