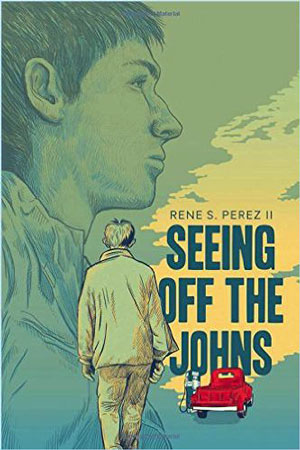 In the Texas town of Greenton, the talented few become mythical figures in the eyes of the locals, leaving those outside the spotlight to contemplate where they stand in the scheme of small town life. This could be a familiar story about growing up in someone else’s shadow, but, in this case, Seeing Off the Johns explores what happens in the aftermath of disaster; the loss of young life on the cusp of greatness.

Jon Robison and John Mejia, or “the Johns,” as the Greentonites call them, are two high school sports stars who receive scholarships to play baseball for the University of Texas at Austin. The day they prepare to leave town is met with celebration and sadness as they two young men sever ties and move on from the place that nurtured and worshipped them. On the way to Austin to move into their dorm rooms, the Johns’ tire blows out on the highway, killing them both in the crash.

Their end is the novel’s beginning. It seeks to tell the legend of the Johns versus the reality of them, and how they affected the individual lives of those who both loved and envied them their success. Concepcion “Chon” Gonzalez resents John Mejia for the attention he received playing sports and for dating his longtime crush, Araceli Monsevais. Araceli attempts to build an identity beyond being John Mejia’s girlfriend. Both characters are thrown back together during their senior year of high school, under the watchful eyes of a town still grieving their loss.

At the beginning the book, the communal point of view of the town sets the emotional tone, but as the school year progresses, the point of view settles primarily with Chon. He grapples with the new opportunity he might have to be with Araceli and the guilt at pursuing her so soon after John Mejia’s death. The voice, which in any other story might feel heavy-handed, is cynical, razor sharp, and real, revealing Chon’s deepest thoughts. This voice deals with his present life, but also widens the story’s scope, allowing the reader to see around Chon’s hyper focused, teenage attraction to Araceli and into the feelings at war inside him. He isn’t special but he wants a bigger life than the one he leads in Greenton.

One of these moments occurs when Chon thinks of starting his senior year:

Going to high school, Chon had learned over the last three years, was like living in Greenton-once you know where everyone is going to be at any given time of day, they would be there forever, like animatronic animals at an amusement park standing at the ready for their next performance to a group of children who actually believe they’re actually living, breathing beings with the free will to step off their tracks and quit their dancing bear show to start a new life where no one throws popcorn at them and everyone they meet doesn’t expect a performance and is willing to leave them in peace.

For Chon, his future in Greenton is bleak. Though he is a decent student, he foresees Araceli moving on to college while he stays in Greenton, continuing to work at the Pachanga gas station with his middle aged, bitter co-worker Ana in a continual ritual of opening and closing the store and waiting on people who never see the real him as they pass through. Throughout the school year, he spends time with Henry and Araceli. She quits the cheerleading squad and rekindles her friendship with him. 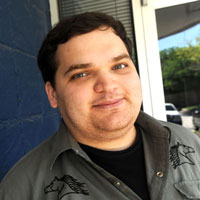 Perez captures the cramped feeling of a small town in each scene, as they drive in Chon’s car up and down the few streets in town, attending football games and high school parties and living on the periphery of the minutiae of small town life. The sense of place, and it’s stranglehold on the characters, is palpable. Araceli says, “it was like purgatory, but smaller.” Throughout the book, there is always a sense of waiting for life after Greenton to begin.

As Araceli and Chon grow closer, they face the town’s disapproval of their relationship, a betrayal of John Mejia’s memory, and soon understand the choices they need to make as graduation approaches. Listening to Bob Schneider on the car radio as they slow dance in the Pachanga parking lot, Araceli realizes how Chon has helped her to heal, and Chon realizes how much she means to him.

Ultimately, the story is Chon’s, Araceli’s, and the individuals who, without the excuse of their limitations, have to understand their life after the Johns are gone. We watch as they grapple with what to do with this freedom and how they realize a life in which their collective memories remain, even while the town’s memory of the Johns fades away.

In the end, memory and the bonds forged in the midst of tragedy remain strong. The story comes full circle, projecting into Chon’s future as he remembers Araceli, the Johns, and what he owes them, telling his grandchildren “the story of how he became who he is.”