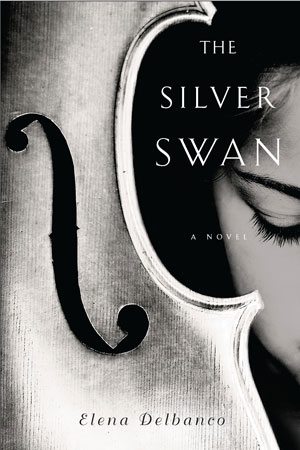 THE SILVER SWAN
by Elena Delbanco
Other Press, 240 pages

Elena Delbanco’s father was Bernard Greenhouse, cellist in the Beaux Arts Trio, and in this first novel full of musicians her lived experience brings authority to her descriptions. Her focus is on a father, Alexander, a famous cellist but distant man, and his daughter, Mariana, also a cellist, poised to follow in his footsteps as a soloist but derailed by crippling stage fright and an unhappy love affair. The cello promised to her since childhood, her father’s, is unexpectedly not left to her in his will: the reader is left to grapple with, alongside Mariana, questions of where love, art, and family intersect. What does it mean when a cello, an object, is the center of a story? What myths do instruments carry; and why do we value the old ones so highly? What does it mean when a father loves his career more than his family? How do we recover from blows dealt from beyond the grave? How do we mitigate the expectations of families to pursue our own passions?

The cello that is the focal point of the novel is called the Silver Swan (because of a silver inlay), and it is fictional but compared to the Countess of Stanlein, the Piatagorsky, the Duport, and other ‘name-brand’ cellos of history. This is a quirk of many string instruments; there is a mythos built up in the lineage of famous players, the well-known makers, the year the instrument was built, the varnish, and the age of the wood that makes some stand out. These are the cellos that are played by the most famous soloists and often land in museums; Yo-Yo Ma plays a cello on loan from the Smithsonian, the Piatagorsky cello is currently on display at the Met.

Having a cello at the center of her story is an interesting choice because at some point all of Delbanco’s characters fall victim to their obsession with the instrument. Mariana’s father calls the cello his greatest love, and Mariana looks forward to playing it on special occasions. She eagerly anticipates inheriting it, to the point that she becomes irrational and destructive when that is not the case. Mariana’s mother, Pilar, figures in the story as a dour figure who is resentful of the fact that the cello takes attention away from her. Claude Roselle, Alexander’s star student, is so worshipful of the cello that when he fears it is damaged he begins to cry. The idea that an object could take precedence over a personal relationship is a realistic one, but it makes it difficult for the characters to appear sympathetic. The reader comes to expect every character to act selfishly on behalf of their stake in the cello in any skirmishes that take place.

Delbanco is comfortable in the world of music: she writes beautifully about the sun’s light on the Silver Swan’s varnish, the concentration of practicing Bach, the beauty of the Berkshires by Tanglewood, the post-concert dinner parties attended by performers and Manhattan elite alike, and the schedule of the touring classical soloist. She truly shines in scenes where Mariana is a teacher, talking about the intricacies of interpreting music and understanding the cello. Mariana, a character who is by turns rash, impetuous, and confused, comes into her own when she teaches, and Delbanco’s dialogue is fascinating in those moments.

As lovely as her navigation of the musical world is, when the spotlight moves from the day-to-day of an artist to the motion of her narrative Delbanco falters. While she can describe the delicacy of a Bach Sarabande, her plot feels by contrast heavy-handed: we watch Mariana’s father and mother fight constantly, her mother accuses her of stealing her father away, her father is revealed to have a mistress and a secret child. Mariana seduces, she faints onstage, she steals a cello and flees across the globe, she burns down a house. The twists happen in slow motion, and are so overdrawn as to take on a soap-opera quality: they are disproportionate to the point of being unbelievable. This is hard to read through; one feels that the plot is forced and littered with intentional and distracting twists and turns instead of leaving the story to naturally develop.

The disappointing nature of Delbanco’s plot is redeemed by her gorgeous prose, which makes the novel imminently readable. She is skilled at creating a world of glamour and intrigue, and her dialogue is a beautiful mix of the witty and the thoughtful. She relishes details: the silver inlay on the Stradivarius at the center of the book, the way the light shines through a fifth avenue window, the dishes of food served at an elegant restaurant all come to life in Delbanco’s impressive first work, The Silver Swan.

Hannah Judd is a rising junior at the University of Pennsylvania, where she is a music major and works as an associate editor at PennSound. She is a cellist who currently studies under the direction of Jeffrey Solow, and has played in the Bowdoin Music Festival, the Cello An American Experience two-week intensive, and Interlochen’s World Youth Symphony Orchestra.