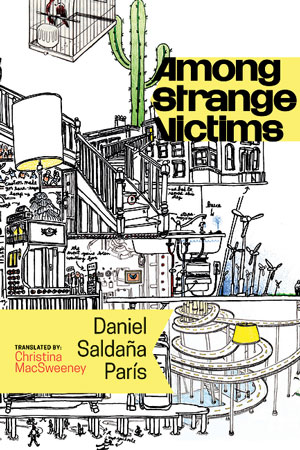 Daniel Saldaña París’s Among Strange Victims, translated by Christina MacSweeney, immediately pulls the reader into its universe. It does so with such thorough and seamless skill that the reader becomes a victim of this strange, off-kilter world. While it’s initially easy to get lost trying to find the meaning, or premise in general, of the series of peculiar events that passes throughout the novel, the ride is worth the suspension of belief. What starts with a proposal in the form of a note, at first presumably left by a snarky, administrative coworker, becomes the catalyst in the marriage of Rodrigo and Cecilia, and the kickstarter for the novel’s bizarre happenings, wherein a group of lonely and bored people seek answers for the inexplicable in the everyday.

The eccentric cast features Rodrigo, the self-proclaimed “useless husband” and once mediocre museum worker turned collector of tea bags and savior of hens; Cecilia, his secretary wife with an attachment to her tiger-striped bedspread; Adela, Rodrigo’s mother, an academic, and the lover of Marcelo, a philosopher who takes a sabbatical (he is a terrible professor) to go to the fictional Mexican town of Los Girasoles in search of a neglected writer, Richard Foret. There are more in the kooky group, in addition to the neglected writer, Foret, who has turned into a madman: Beatriz, Foret’s wife, a “cosmopolitan poet and mediocre depicter of fairy scenes,” and the mysterious, time-traveling, Micaela.

All members of the group wind up in Los Girasoles at some point in their lives, on one of two timelines in the story, or, in the case of Marcelo, both. Los Girasoles, a diamond in the ruff of some “shady” Mexican cities, where the night is too quiet and the milk is “too thick to quench your thirst,” is where native Rodrigo’s mysteries and demons come to a head, forcing him to face all of the questions and doubts about the human condition. What began with a hunt for the illusive hen in the yard of his building and turned to a mysterious “turd” on Cecilia’s bedspread becomes the fuel for his hunt for the truth.

Complacent Rodrigo is a paranoid, socially challenged individual with no filter, whose internal monologue is completely entertaining. Readers will find themselves unable to decide if they should be irritated with or amused by him (often both), balancing the sublime and bordering on magical realism. In thinking about his wife doing all of the driving for their trip, since Rodrigo doesn’t know how to drive and in no way plans to learn, he even thinks:

Resigned to my uselessness, and having accepted it as one of my principal features, she’s unsurprised that it should manifest itself once more in this new impossibility. She suspects—and she’s right—that in the coming years I’ll gradually renounce more and more activities, until I end up sprawled prostrate in a wing chair, observing a collection of tea bags on the coffee table, dribbling a little out of the corner of my mouth, and uttering, with ridiculous emphasis, the word egg.

Saldaña París’s prose is a lesson in the art of subtle bomb dropping, nestled at first in the light-hearted antics of Rodrigo before shifting to a startling and, ultimately, chilling reveal of Cecilia and Beatriz’s past. Such sharp storytelling is often made possible by the abrupt transitions between the first and third person; with history so rich it’s difficult to believe that this is a work of fiction.

Among Strange Victims reads like some of David Sedaris’s short stories, with pages of witty banter between the narrator and himself. Rodrigo’s self-deprecating nature combined with his natural curiosity for the inexplicable facets of life creates a truly beguiling story. Each chapter—each page, really—is just one tile in the domino effect, of an unusual, yet all too familiar narrative, which ultimately leads readers to the pleasant feeling that there’s something more beyond what we perceive as our banal and routine existence.

While this is the lauded Montreal-based author’s first novel to appear in the US, his poetry and prose have appeared in multiple anthologies and other literary publications. Most recently, he’s been published in the anthology Uñas y Dientes, as well as México20: New Voices, Old Traditions. This novel is a doorway onto a burgeoning career.

Lillian Brown is a recent graduate of Phillips Exeter Academy and currently lives in New York. Her work appears or is forthcoming in The Sonder Review, Driftwood Press, and Allegro Poetry. She also works with the arts and literary journal, The Missing Slate.