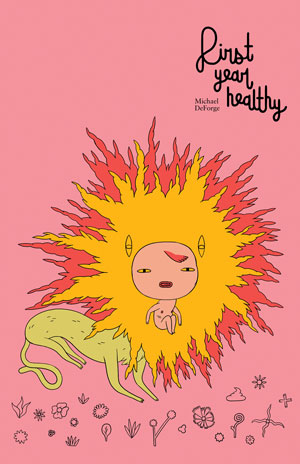 In Michael DeForge’s short, gnomic First Year Healthy, terse declarative prose is set alongside hallucinatory artwork to create a sense of unease and unreality that deepens over the course of the narrative. First Year Healthy is the illustrated monologue of an unnamed young woman describing her life after being released from psychiatric care for an unspecified “public outburst.” The details of the story are delivered flatly, no matter how outrageous or impossible, casting each new revelation in the same terms as the last. In fact, more emotional heft is given to the description of the narrator’s job gutting and packing fish than to her first bizarre sexual experiences with “the Turk,” the man she eventually moves in with.

In contrast to the prose, the artwork is vibrant and varied, with the open space of the backgrounds often patterned in abstract shapes and curlicues. It’s increasingly unclear as the story progresses whether what we’re seeing is simply stylized or a representation of the way the world actually looks to the narrator. A Christmas tree bears more resemblance to a haphazard pile of seaweed than to a real spruce, and it is decorated with the same pustule-like baubles that frame the introduction of the Turk’s son. The book’s most frequently repeated image, the “sacred cat” that graces its cover, silently haunts the pages, stalking through backgrounds and peeking in windows. The construction of the characters’ bodies is squat, exaggerating their heads, and the narrator’s body is dwarfed by two massive tufts of hair that cover her eyes and swing out to either side of her. 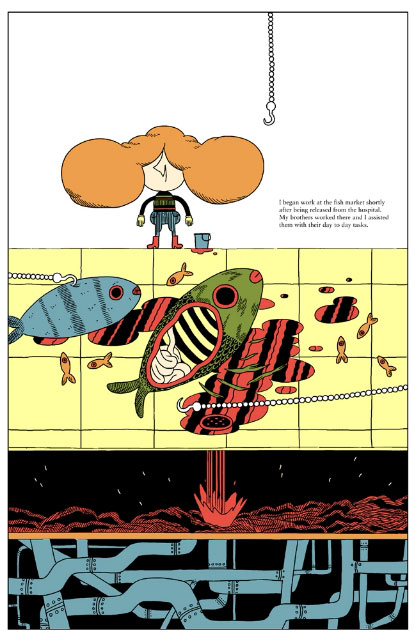 The perspective of the pages is often partially flattened, giving a curious layered feeling to the composition; the ground beneath the figures’ feet is sometimes peeled back to reveal what’s pulsing underneath the asphalt. Several of the drawings gave me the sense of looking at a diagram of skin in a textbook, the kind that shows the subcutaneous layer in pink, puffy rows. The book’s design, with its bright pink hardcover, wouldn’t look out of place on a children’s bookshelf, but the glowering pink fetus-like baby on the cover would, hopefully, ward away any children.

At first, I thought my job in reading First Year Healthy was to solve its puzzle: to comb through it for clues that would signal when the narrator’s break from reality begins. Is it the first time the “sacred cat” is mentioned and pictured blessing the house? Is it when the narrator attempts to breastfeed the Turk’s abandoned son? Perhaps the entire thing doesn’t happen, and she never leaves the hospital. But the more I tried to find the seams, the more I realized that the tale is not a puzzle to be solved. Or, if it is, it’s the kind of puzzle where the pleasure is in turning gears rather than finding the solution. After spending time with it, First Year Healthy feels like a rejoinder to a trope that’s common in fiction: mental illness as a “gotcha” plot point. DeForge doesn’t flinch away from his narrator’s illness and instead adheres to her shifting reality, even when stepping back from it might give a more traditionally satisfying ending. 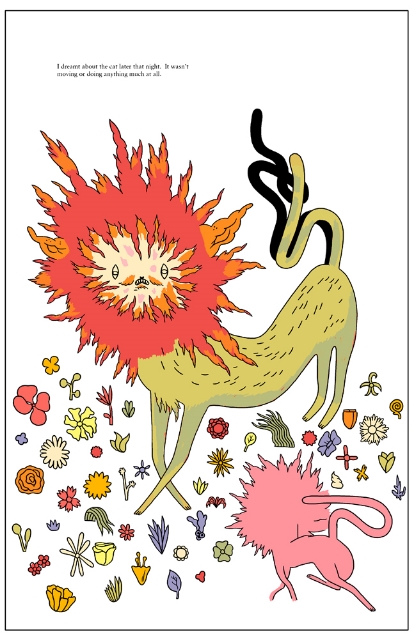 Rather than analyzing and putting her on display, First Year Healthy showcases its narrator’s idiosyncrasies and leaves it up to the reader to find meaning in the shifting narrative. Though if told from any other character’s perspective the arc of the story would almost certainly be tragic, its effect as written is instead melancholic and perversely hopeful. In the end, we’re left with a few deliberately unpoetic lines and the image of the sacred cat, padding through the snow in charge of the growing, happy baby. It’s certainly an impossible outcome, but it’s no less welcome than the probable squalid reality, lit by pulsing ambulance lights.