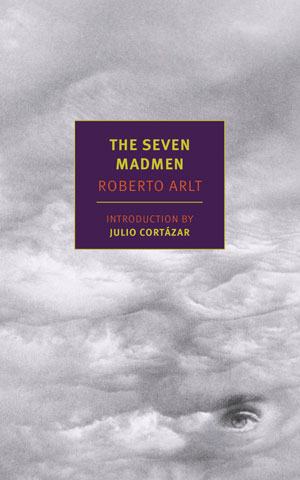 Madness is synonymous with insanity, but to be “mad” one doesn’t necessarily go crazy. One might be mad at society, a world of socially imposed rules that stifle the imagination or measure people according to economic usefulness. Rage against a world in which a multicultural, mostly impoverished majority are controlled by a corrupt, wealthy minority could be defined as a type of “madness.” In such a state, the individual’s warped mind drives him to fantastical plans for revenge, deep wells of anguish or panic, brothel-filled nights, petty crimes, thoughts of suicide, kidnapping, and imagined love affairs.

This is the rage that drives Augusto Remo Erdosain, the central character of Roberto Arlt’s novel The Seven Madmen, to steal money from his employer, make plans to form a new secret society with a pseudo-intellectual known only as the Astrologer, and to finance those plans with money ransomed from his wife’s cousin. Set in Argentina at the beginning of the twentieth century, Arlt’s novel depicts a Buenos Aires infected with madness. Streetwalkers earn money for abusive, jealous pimps; tax collectors (like Erdosain) embezzle money; lonely men commit suicide in public.

It’s a world Arlt knew well. He worked primarily as a journalist for the Argentine newspaper El Mundo, composing sketches of Buenos Aires’ citizens for his column Aguafuertes porteñas (“Etchings of Buenos Aires”). In addition to short stories and plays and The Seven Madmen (1929), he wrote two other novels, The Mad Toy (1926) and The Flamethrowers (1931) before dying of a heart attack July 26, 1942 at 42. He returns as a compelling voice for the contemporary reader in this new translation by Nick Caistor.

With his crime, Arlt’s protagonist Erdosain confronts the hypocrisy of his hope to find a happy (i.e. anguish-free) existence and/or to fall in love with a millionairess: “He went on to imagine the happiness that would purify his life if something impossible like this were to happen: yet he knew it was easier to stop the earth turning than for such an unlikely event to take place.” 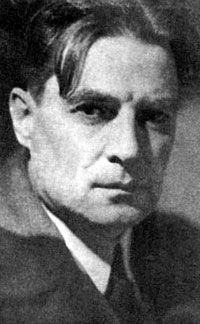 After Erdosain’s employer confronts him about his theft, Erdosain goes to his friend the Astrologer to ask for money to pay back the stolen sum. At the Astrologer’s house, Erdosain also meets Arturo Haffner, a pimp known as “The Melancholy Thug,” who agrees to give Erdosain the money. The Astrologer is building a new society, which will stand on the pillars of obedience and industry and will be continually sourced by a system of brothels operated and managed by Haffner. Before they can begin society building, the Astrologer needs a starting investment. The Astrologer describes the theosophy of his society to Erdosain: “We need gold to capture men’s imaginations. Just as in the past there were the mysticisms of religion and chivalry, so now we have to make industry mystical.” The Astrologer invites Erdosain to be part of this new, secret society so that he can finally fulfill his potential and develop his inventions: weaponizing Asiatic cholera bacillae, adapting steam engines to run with electro-magnetics, building a dog salon where pet owners can dye their dogs wild colors, and copperplating roses.

Erdosain suggests that the Astrologer and Haffner could kidnap his wife’s cousin Barsut, a single man with an inherited fortune of 20,000 pesos, and hold him for ransom. Unsurprisingly, Barsut dislikes Erdosain and later admits that he anonymously reported Erdosain to his employer. Barsut wanted to humiliate Erdosain in front of Elsa, Erdosain’s wife, but Elsa leaves Erdosain for a captain in the Argentine army.

Humiliated and wife-less, filled with an anguish that permeates his soul, Erdosain brings Barsut to the Astrologer’s house on the pretext that Elsa may have fled to the same area. The Astrologer and another thug named Bromberg capture Barsut and force him to give them his money.

With their starting revenue secure, the Astrologer holds a meeting for all his officers which include Erdosain, Bromberg, Haffner, a major in the Argentine army (who later turns out to be a fake), and the Gold Prospector, who claims to have found a lake of gold near Campo Chileno. The Astrologer names Erdosain his Chief of Industry, Haffner Chief of Brothels, and assigns the Gold Prospector the task of setting up a training camp in the forest. But before the society can begin, they must kill Barsut and cash the check. Despite his hatred for Barsut, Erdosain is wracked with guilt. When he returns home, he meets Hipólita, the wife of his friend Ergueta, a gambling addict with a theory for winning roulette. The theory fails and bankrupts Ergueta, who goes mad (crazy) and is sent to an asylum. Hipólita asks for Erdosain’s help to free her husband. With no one else to console him, Erdosain tells Hipólita everything and realizes that she, a prior prostitute and housemaid, is the great love he has pined for all his life.

All this madness makes for a fairly straightforward plot. But with the many asides, bouts of insanity, commentator interruptions, footnotes, feigned deaths, and deceptions, Arlt creates a world crazily chuckling at itself. After Erdosain cashes the check, the Astrologer encourages him to stick with the plan (much like Jesus calling the tax collector Matthew to rise up and follow him): “We have to believe in ourselves. Our society can spring a whole lot of surprises. We’re discoverers who have only a vague idea of the direction we’re heading in. If that!” At times brilliant, subversive, or manic (at other times Christ-like and, alternatively, Lenin-esque), the Astrologer is the novel’s madhatter, proudly holding up his tea cup and shouting: “We’re all mad here!”

If you’re keeping count of the madmen, six candidates definitely include: Erdosain, Ergueta, the Astrologer, Haffner, Barsut, and Bromberg; however, the seventh madman is less easy to identify. This person could be any of the minor characters: the Gold Prospector, the “fake” Argentine major, Captain Belaúnde (who runs away with Erdosain’s wife), Elsa, Hipólita, or the Espilas (a once-wealthy family that devotes their time to Erdosain’s copperplating invention). But I think the last madman is the unidentified commentator, who periodically reminds the reader that he is listening to Erdosain: “I remember it well. During the three days he was holed up in my house, he told me everything.”

The commentator also interjects tidbits of information with footnotes: “Commentator’s note: This chapter in Erdosain’s confessions led me to wonder whether the idea of the crime he was going to commit did not already exist in his subconscious mind, which would serve to explain his passivity in the face of Barsut’s aggression.” In fact, we may even assume that the commentator is Arlt himself because, after all, isn’t an author a bit of a madman? Arlt grew up in the slums of Buenos Aires at the turn of the twentieth century. Like thousands of European immigrants, Arlt’s parents immigrated to Argentina hoping to acquire farmland. This land was tightly controlled by a wealthy minority and so many immigrants were forced into slums where they could only find work as minor tradesmen.

In the throes of such a boiling pot, the madness of Arlt’s characters seem more revolutionary than crazy. Anger at the current organization of society is shared by everyone, including the female characters, who Arlt describes as either virgins or whores. Suspend (for a moment) the idea that Arlt might be a misogynist and consider that perhaps Arlt makes this absurdist reduction as a pointed comment of the general treatment of women—both in the outside Argentine culture and the newly imagined brothel-only culture of the Astrologer’s society. For example, Arlt describes Erdosain’s nightmare of Elsa satisfying another man:

It was useless…Elsa…yes, Elsa, his lawfully wedded wife, was trying to caress the whole of the man’s sex with her tiny hand. Groaning with desire, the man clutched his head, covered his face with his forearm, but she leant forward to brand his ears with this burning iron: “You’re more beautiful with my husband! My God, how beautiful you are!”

But then later Arlt delves into Hipólita’s point of view, recalling the pathetic simplicity of all the men she had been with:

…so they all filed past her, all linked by that same, unquenchable desire: and all of them had at one time or another let their weary heads droop on to her bare knees; and all the time she put up with their clumsy hands, the fleeting desires that stiffened these sad dummies, she thought of life as having to go thirsty in the midst of a desert.

Toward the end of the book, the Astrologer gives his own definition of madness: “What’s known as madness is simply what most people aren’t accustomed to thinking.” This statement could, in fact, describe the world of the novel—a place where madness (both insanity and rage) is the norm and sanity is far more uncommon. Arlt’s Buenos Aires is filled with madmen and madwomen clamoring, aching, for something pure and free of anguish. Do these madpeople finally achieve their dreams? Arlt ends this novel with a twist and a note from the commentator: the adventure concludes in the next volume, The Flamethrowers.