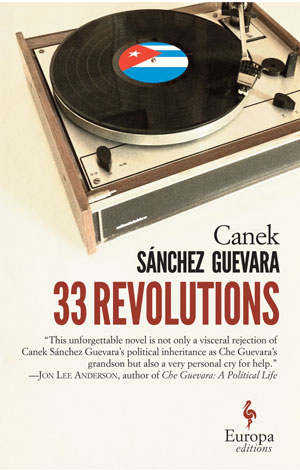 Canek Sánchez Guevara’s 33 Revolutions is a prayer of a novel with a single liturgical refrain and a retort (of a kind) to the giddiness emitting from the American-Cuban travelsphere. Not since Reinaldo Arenas has a Cuban literary voice arrived on American shores with such beaten madness, and sense of personal desperation. Sánchez Guevara, who died last year at age 40, was the eldest grandson of revolutionary Ernesto “Che” Guevara. His mother, Hilda Guevara Gaesa, was Che’s oldest child; Hilda’s mother (also Hilda) introduced Che to the Castro brothers in the mid-1950s. (It’s worth remembering that the American literary public became enamored of Arenas after his death, too.)

The unnamed protagonist of 33 Revolutions is a twenty-something employee of some Cuban government bureau or the other, a Winston Smith who has begun to break. The translator Howard Curtis amply translates the protagonist’s inner-voice and darkening setting from Spanish to English. “Water seeps in through the windows,” the protagonist notices, “soaks the walls, forms pools on the floor. Mud. Grime and more grime. A grimy scratched record.” 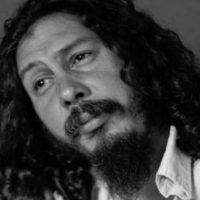 Sánchez Guevara was raised in Havana in a large house amidst the Communist elite; his parents sent him to school in Barcelona (where he learned Catalan) and Milan and Mexico City. As a teenager, he returned to Havana, and became increasingly distraught over the repressiveness of the Castro regime. He became a punk and a heavy metal musician and formed a band called Metalizer. “Once,” he told Phil Davison of the Independent, “two plain-clothes security police jumped me, accused me of being on drugs, forced me to squat and checked my anus for hidden drugs.” Music became a defense against tyranny; in 33 Revolutions, it comes to symbolize the sense of numbing repetition, Orwellian stasis of the regime:

Nothing works, but it’s all the same. It’s always the same. Like a scratched record, always repeating itself…

With this repeating evocative metaphor, which produces both sound and nightmare image—and anxiety—Sánchez Guevara has given us, in the posthumous wake of his early death, a new refrain of crushed hope, lies piling on lies, and a populace incapable of reaching over and moving the needle. “Blackmail unites, decline disguises itself as progress,” writes the grandson of Che, “and even so the record keeps turning (the needle sticks, jumps, and goes backwards): Confusion is the one certainty.”

Here, then, is a new song of misery for the undemocratic world steeped in the viscera of Cuba, its tropical heat and saturated air. “A lethargy as big as the sea takes possession of life,” writes Sánchez Guevara, and his protagonist drifts closer to the edge. Armed with a camera and some film his mother sends from abroad, the unnamed protagonist has begun to see more clearly; it becomes impossible to retain faith in the revolutionary government. Sánchez Guevara translates this experience with exacting control. “Deep down, something is moving, falling apart, breaking up.”

Sánchez Guevara spent his short adult life attempting to account for the breech. It couldn’t have been easy to abandon the revolution his grandfather, the single most beloved (and commoditized) symbol of rebellion in the world, had helped ignite. But, he told the Independent’s Davison, “Che would have been proud of me. He was a rebel. He never would have approved of what has become of this revolution. Let’s be honest, a young rebel like Fidel Castro in today’s Cuba wouldn’t be sent into exile. He’d be shot.”

In 33 Revolutions, Sánchez Guevara invites the reader to experience the moment of rupture—not just for the unnamed protagonist but the entire island. Groups of people begin to launch rafts or steal tugboats. The government responds with demands for vigilance and repression. The scratched record skips, repeats. Sánchez Guevara’s protagonist jumps off. “I’m not going to suppress anybody,” he says, and with that launches a counter-revolution.