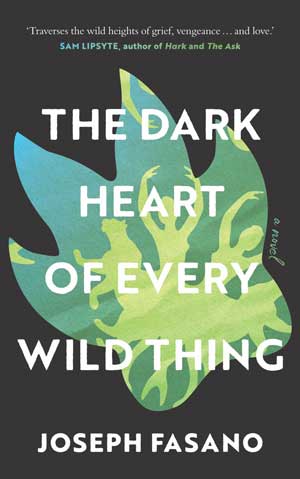 In the moral universe of poet Joseph Fasano’s debut novel, The Dark Heart of Every Wild Thing, death lurks in every corner of life. A father, bereaved of his wife, must journey through the teeming forests of British Columbia and hunt a fabled mountain lion, to him the very “mind of the wild.” Three years ago, it mauled his son, the father powerless to save him. Now, as he narrates his monomaniacal fight for survival, the hunt for the mountain lion becomes an obsession, borne of unfathomable grief, to exact revenge on a world that has stolen everything he loved.

It is a dramatic book, straddling the sentimental and the brutal. Accordingly, it divides each chapter into two sections, one to the hunt and the other to his marriage. While he recalls memories of his wife to last him through the cold and deadly wilderness, the memories end inevitably, as he fears his hunt soon will, in death. Loss is the overpowering theme of his life. When he returns to the woods to avenge his son’s death, he is chased by wolves and forced to eat snow, and he must reckon with the possibility that there are some things a man cannot save.

I use the word “man” deliberately. Despite its intentions, Dark Heart is characteristically masculine. For all the mystical poeticism layered over the hunt, it embodies a Hemingway-esque male fantasy. What’s more virile than roughing it alone in the wilderness, outfoxing ravenous beasts and still more ravenous hunters? While it strives for something nobler than its subject, its failure to address the gendered aspect of the father’s hunger for revenge chains the novel to the ground whenever it tries to soar.

Alongside his wife’s death, there is a more latent loss, another strike at his masculinity. Just as he lost his wife, he lost also his role as husband. This complicates his marital reflections in the wilderness. Is he remembering her or recreating her in his own image? Regardless, she comes across as a bland, incomplete counterpart to an obscenely masculine hero. He hunts; she dances. He shows his son how to build a house; she brings them lemonade. He gets to go on wild adventures; she tends to house chores. To his credit, he seems at least somewhat aware of this inequality. At one point, he recalls this exchange with a premarital lover:

“You are not ready.”
“For what?”
“To hold someone and not—” she searched for the words “—not make of her what you need.”

This could describe either Fasano or his protagonist.

It would be unfair, however, to characterize Dark Heart solely by its refusal to buck these misogynistic tropes. Rather, they read as something the novel struggles against. The narrative gropes for higher meaning through magisterial prose, equally concerned with philosophical abstractions as with blood-and-guts reality, and though it never fully succeeds, it reaches heights most books dare not consider. The prose alone can bring you to tears. It challenges, cleanses, saddens, lifts, pierces, and consoles, sometimes within a single paragraph. Take this passage as emblematic of the atmosphere Fasano conjures:

It was pleasant once to track in the early autumns, the chickadees and the violet-green swallow beginning always to sing their unfinished praise, the heron that always came north out of its range to cross once a season over the valley and disappear over the pines to god knows where. […] I’d loved it, too, the purring and caterwauling of the animal itself, and in the thaw of youth I’d believed in the myth that we were brothers, that if you hunger for something strongly enough in the night, strongly and without pride or malice, you become it, and whichever one of you is chosen to fall will yield itself willingly and truly in the nature of things, as a body at the high noon of its truth gathers back the vastness of its shadow.

If this language captivates you, so will the entire novel. Fasano is relentless in maintaining his narrator’s dense, hypnotic, imaginative voice. It accounts for almost all of the novel’s emotional range. Just as it details the father’s gory injuries and self-administered treatments, it gives way to moments of bracing tenderness. By now, the likeness to Moby-Dick should be obvious. (Really, just substitute a white whale for a mountain lion and a lost leg for a lost son.) When it isn’t bogged down in masculine reveries, it earns the comparison, describing universal themes with invigorating passion: mortality, grief, hope, darkness. Whether the prose succeeds in elevating the novel to the lofty existential plane it aspires to, the reader must decide. 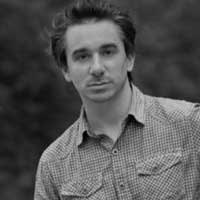 If, in fact, the reader does decide. I still haven’t made heads or tails of the novel weeks after finishing it. Did I enjoy reading it? Frankly no. Has it fascinated me? More than almost any other book I can recall. It seems to me that this is how the novel was meant to be read. That is, not read but reckoned with. You must yield to its intense vision and follow the father’s voice to its last end. The novel doesn’t captivate you. It takes you prisoner.

After a story shadowed over by death, it ends on a note not devoid of hope. Fasano allows his protagonist to escape the book’s endless shadow, the darkness to lift, in a way utterly surprising yet perfectly fitting. Nevertheless, I lament the much richer novel he didn’t write. Clearly, he can write powerfully about anything he sets his mind to. I just wish he had devoted his capacious artistry to deconstructing the limiting gender roles that limit his own narrative. I find myself repeating a verse of a poem the narrator’s wife reads to him: “I wish what I wished you before, but harder.” 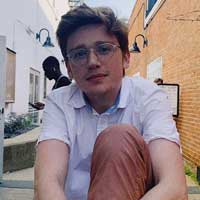