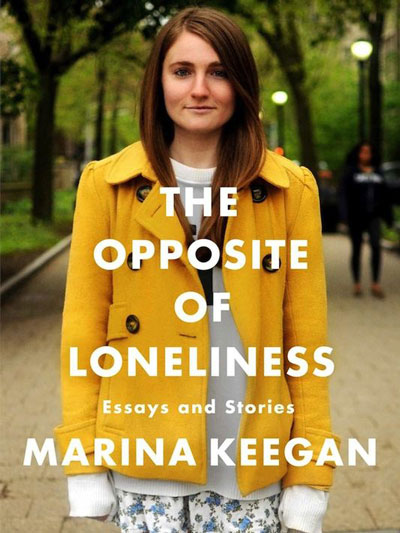 THE OPPOSITE OF LONELINESS
by Marina Keegan
Scribner, 240 pages

There’s a stretch of Philly’s Walnut Street Bridge that makes me tap my brakes. I’m not a slow driver by nature, but that corner with the new streetlight always makes me reduce speed. About a year ago, a young man lost his life right there, when two cars collided. As one of the vehicles spun onto the sidewalk, Zachary Woods climbed the streetlight to avoid the car. Unfortunately the vehicle knocked both man and lamppost over the bridge. If the story isn’t sad enough, consider how talented Zachary was: he’d received dual admission to the MBA program at the Wharton School and a selective International Business program with the Lauder Institute. The guy was fluent in Chinese, skilled in international investment, and a record-breaking NCAA swimmer. No calculator is sophisticated enough to tally what the world lost during that crash.

The memory of this incident haunted me as I read The Opposite of Loneliness, a collection of pieces written by Marina Keegan. Her title essay scored more than a million Internet hits shortly after its online publication. Marina, whose lovely smile adorns the book jacket, earned a Bachelor’s Degree, Magna Cum Laude from Yale, and had a job offer at The New Yorker. But her promising life ended in a car crash just five days after her graduation ceremony. You can read the book to commemorate her life and talent—or read it just to be impressed by the skills a young person can acquire when fully immersed in the craft of writing. Marina clearly had the literary ability needed to launch a promising career.

I approached the volume with some reverence, thinking often of talented college students I know and the love their parents invested in every aspect of their growth. What solace is there for a mother or father who sees the life of their prodigious child erased under such tragic circumstances? I believe that Marina’s parents published the book as a means of seeding their daughter into our consciousness—as Marina might have, if she’d lived out her literary dreams. I began reading the book as if it were a tribute, and I tagged the first few sections as precocious work from a young adult immersed in the college experience. But I also found myself wondering if I could have written something that good at her age. If I answer with total honesty, I’d have to say her technique was better than my collegiate approach, but her imagination seemed no more exceptional than most people I studied with. Then I got to a section called “Reading Aloud,” one of the book’s short stories, and became convinced that Marina really did have a kind of nuanced understanding that very few people possess in their early 20’s. Her writing captures the experience of a young blind man—and the middle-aged woman who reads to him—in a way that feels real, raw, and compelling.

Among the book’s pieces, the short stories offer the best barometer of Marina’s talent. She writes convincingly about the experiences of people trapped in a lost submarine, a woman who gives a baby up for adoption, and a young American civilian working in Iraq’s Green Zone. The stories have a striking elegance and precision. An unusual number of her pieces mention the topic of untimely death. I couldn’t help wondering if the author had some strange sense that she might not live a long and eventful life. Even the quotes between sections seem to suggest that she had an acute awareness that our existence could be extinguished at any moment.

Whether we escape tragedy, or live with what Jon Kabat-Zinn calls “The Full Catastrophe,” the experience we call life is really a fragile illusion, easily undone by random events. We nurture those we love and plan for what we think will happen next. But there is no guarantee that things will proceed in the safe and predictable way we crave. As a reader, I’m glad that the Keegan family decided to publish their daughter’s writings. Together they document Marina’s interest in other people, her ability to capture unique emotional experiences, and the extent to which her work can inspire young people to develop their full range of talents. Her story also provides a potent antidote to complacency. We are beginning a new year. Don’t wait to write your stories. Don’t wait to share your love. Tap the brakes, pay attention, don’t wait.

Colleen Davis is a Pennsylvania writer and author of the website Between the Pond and the Woods, which provides information and a Facebook forum for dementia caregivers. Her writing has been featured in Making Sense of Alzheimer’s, Elephant Journal, and on episodes of the television documentary  Philadelphia: The Great Experiment.